Republicans Are Divided Over Changing the Rules to Confirm Neil Gorsuch

Conservatives are united behind Judge Neil Gorsuch‘s nomination to the Supreme Court. But facing potential Democratic obstruction, they’re divided over the best way to get him there.

The question is what to do if Democrats decide to filibuster Gorsuch, a hard-line tactic that would normally require 60 votes to overcome.

The White House, Republican leadership in Congress and outside conservative groups have varying levels of enthusiasm for triggering the so-called “nuclear option” to change Senate rules and muscle Gorsuch through on a simple majority vote.

President Trump has signaled that he’s gung-ho about the maneuver.

“If we end up with that gridlock I would say, ‘If you can, Mitch, go nuclear,’” Trump said in early February. “Because that would be an absolute shame if a man of this quality was put up to that neglect. I would say it’s up to Mitch, but I would say, ‘Go for it.’”

Some of Trump’s key advisers are also pushing it, with an eye towards the future. One argument being made in conservative circles is that even though Gorsuch won’t change the ideological balance of the court, Republicans should go nuclear now to pave the way for a likely more brutal confirmation fight to replace a more liberal justice.

Republicans have only a slim majority in the Senate right now, and there’s some concern that when the next seat is vacated, they may not have the 51 votes required to trigger the option when they need it.

Read More: Meet the 10 Democrats Who Face a Tough Vote on the Supreme Court

“I think now is the time to go nuclear if you have the opportunity,” says an adviser to Trump on the Supreme Court. “The next vacancy, whatever it is, is likely to be one where the balance of the court arguably changes. And that raises the stakes in such a manner that I think unless you already have the [nuclear] option in place, and [have had it] used for the Supreme Court, it’s very hard to do.”

Proponents of using the nuclear option for Gorsuch also point to the fact that no Supreme Court nominee has ever been successfully filibustered, so they say it’s the obstructionism that’s precedent-breaking, not removing the filibuster.

“The historic tradition of the Senate has been a 51-vote majority for Supreme Court confirmations,” says Leonard Leo, a conservative legal scholar who has been working with the president on Gorsuch’s confirmation. “Resorting to the Reid or nuclear option simply reinforces that simple majority tradition.” (Former Democratic Majority Leader Harry Reid first used the nuclear option in 2013 for lower court judicial nominees but kept the filibuster in place for the Supreme Court.)

Carrie Severino, policy director of the conservative Judicial Crisis Network, also notes that Democrats initially “weaponized” the filibuster against judicial nominees. She’s a proponent of Republicans going nuclear if Democrats try to filibuster Gorsuch, especially after Reid’s actions showed that the other side was willing to take that step if necessary.

“I think that now that the genie is out of the bottle, it’s foolish to assume the Democrats wouldn’t get rid of the filibuster instantly if the Republicans used it,” she says.

But others, including some Republicans in Congress who will have to vote on the option, are more hesitant. After all, Republicans won’t always be in the majority, and some want to preserve minority power for when the shoe is on the other foot.

“I am not a proponent of changing the rules of the Senate,” Sen. Susan Collins of Maine said. Sen. John McCain said he’s worried that “what goes around, comes around.” And Sen. John Thune expressed similar concerns: “It’s risky in terms of the precedent this creates in the long term,” he said, according to Politico.

“It could in this particular instance be a good thing because you get a good nominee on the court, but in the future it could not be a good thing,” explains James Wallner, vice president of research at the conservative Heritage Foundation.

If just three Republicans vote against the rule change, it won’t pass.

“It comes to be seen as a foregone conclusion,” Wallner says of debates over the nuclear option, “when in reality the Republicans aren’t unified necessarily.”

In the end, it falls to McConnell to decide whether to propose the change if the Democrats mount a filibuster. Like other Senate Republicans, he’s hesitant to do anything to diminish the power of the Senate, or put his party in a weaker position in the future when the Democrats are in the majority. But he has signaled that he’s willing to do it if that’s the only way to get Gorsuch on the bench.

In response to a question from National Journal at the end of January about changing the rules, he said flatly, “We’re going to get the nominee confirmed.” 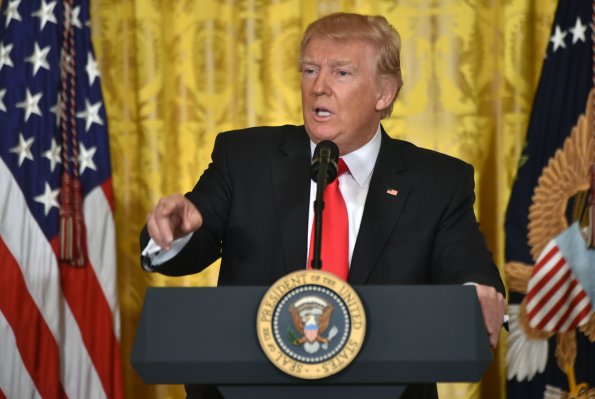 The Facts Behind President Trump's Statistic on Judges Who Ruled Against Him
Next Up: Editor's Pick