The Nintendo Switch Appears To Be Everything We Hoped For

“Whoa,” says my 4-year-old son as I scoot onto his bunkbed grasping Nintendo’s eminently totable new game system, called Switch. My son’s like a mini-me version of Keanu Reeves’ Ted, except the incredulity is 100 percent sincere.

We’d been playing The Legend of Zelda: Breath of the Wild for Nintendo’s console on the living room TV, until I told him it was time to say goodnight…then followed him to his room, Switch in tow. “Are we going to play your new Zelda in my bed?” He makes a hysterical giggling sound, same as when we tell him we’re going swimming, or building a room-scale blanket fort, or that tonight’s a “stay up late” night. Not that he’s never held a screen in bed before. His iPad mini harbors just one game, Minecraft, and as far as he’s concerned, Minecraft is god. But tonight, for the first time in months, with the flip of a you-know-what, we have inexplicably killed god.

Except it’s entirely explicable, once you’ve hefted Nintendo’s new $299 hybrid TV/mobile entertainment platform in your hands. The novelty of a mainstream gaming system that goes wherever you do feels gravitationally irresistible. You can get why it exists by observing what it does, a feat that’s true of little else in the games industry. There’s certainly none of that confusing “Which screen do I eyeball now?” business per Nintendo’s Wii U. Drop Switch in its cradle, count to three, and it’s on your TV. Pull it out and it’s in your hands. Decouple the Joy-Con controllers from its sides, pop the rear kickstand and it’s on a table (or seat-back tray), your hands free to roam anywhere like creatures loosed from their cages.

These are just my first impressions of the system, but for the past 48 hours neural scans of my brain would probably resemble explosions in the sky. This, in theory, is the system I’ve wanted Nintendo to make for a very long time. As I’m typing this, the Switch (in handheld mode) is nestled in an elongated case inside a backpack sitting beside me at a coffeehouse. Yes, that’s something mobile phones, tablets and Nintendo’s own 3DS can do. But it’s all the things they can’t do that seem to validate Switch’s existence.

Chief among them is Switch’s ability to facilitate continuous play. Drop it in its cradle (the cradle attaches to your TV with an included HDMI cable), slide the Joy-Con controls up and off the 6.2-inch touchscreen’s sides, and you can either play holding them separately in your hands, or slip them onto an included “grip” that approximates the geometric feel of a traditional gamepad. The game never ceases to function. There’s no shuffling of save files, waiting for video streams to buffer, or rebooting of operating systems. You merely shift video outputs, a process simpler (and faster) than tapping the “input” button on a TV remote.

And then you’re playing the same game, with precisely the same controls. If you disagree with the mindset that smartphones and tablets are ubiquitous to mobile gaming’s future, and if you believe that buttons, triggers and thumb-sticks are superior at enabling vital forms of play when contrasted with touch screens (which, granted, are perfectly apt in their own ways), Switch is a kind of rebel yell in your direction.

It’s important to note how durable and substantial Switch feels, an unostentatious but strangely beautiful carbon-black slate that’s like a blue collar version of an Apple product—all the same “magical” design elegance, none of the pretension. I haven’t hurled it to the floor, as someone at Nintendo allegedly once did with the company’s original Game Boy. Nor have I brutalized the screen with my car keys as I want to do whenever someone asks whether screen protectors are worth the money. But at roughly the same weight as an iPad mini, it feels suitably compact and lightweight, though dense in the way human brains seem wired to associate with high craftsmanship.

Those disappointed by the Wii U’s sluggish controls (myself included) can rest easy: Switch’s operating environment is a full 180. It’s also spartan, a parade of square boxes signifying available games that’s like an austere rendition of the PlayStation 4’s left-right selection tool. Below that, six circular options let you explore News, the eShop, a photo Album (of screen captures), check on connected controllers (including battery levels, which is very helpful), System Settings and a Sleep button. Hold the Home button on the right Joy-Con and you’ll conjure a quick menu that lets you put Switch to sleep or enable Airplane Mode. Whatever you do, Switch’s responsiveness clocks in microseconds.

My worries at this point are premised on all the stuff Nintendo has yet to clarify about Switch. In no particular order: Will it have a virtual console that’s at least on par with Wii U’s? Will eShop purchases carry over? How robust will the online service be? How does the upcoming mobile app work, and is it (along with a smartphone or tablet) complementary or mandatory? Will finding, friending and interacting with other players be as intuitive as rivals’ approaches? And will Switch support some form of in-game accomplishments tied to player profiles? Nintendo is famously resistant to imitating others’ ideas, but crafting some sort of meta-motivational framework feels like a piece that’s missing from the Nintendo-verse.

Read more: Every launch title for the Nintendo Switch

There’s an update promised just prior to launch that’s supposed to add the online functionality, but at this point what it harbors and how well it’ll work is as hypothetical for those of us with early review units as it is for just about anyone reading this.

Yes, 32 gigabytes of internal storage (of which 25.9 gigabytes is accessible) is tiny, so let’s talk about that. The digital version of Breath of the Wild is said to consume 13.4 gigabytes. If that’s at all representative, you’re not getting much else in the door here without picking up an expansion micro SDXC card. You can find 64 gigabyte options for around $15, so it’s not some crazy hidden expense. But just as with Nintendo’s 3DS handheld, it’s also a compelling argument for buying the physical versions of games, which come on tiny cartridges, since they take up no storage internally.

The only game I’ve been able to try so far is Breath of the Wild, and while I’m not allowed to write about it yet, I can say the battery while playing in handheld mode drains quickly, definitely near the 2.5 hour side of Switch’s official 2.5 to 6 hour range. The system also seems to charge slowly while docked if you’re simultaneously using it, a probable pain point if your play schedule doesn’t involve breathers for the system to gulp down electricity.

I also have a minor use-case worry about the dock’s ability to stay in place on a shelf. I’ve been playing a lot with the Pro controller (sold separately for $69), which connects to the dock via USB-C. While I admire its ergonomics even more than Sony’s DualShock 4 (my prior high watermark), the cable comes up short at about 4 feet. The good news is that the Pro controller runs for something like 40 hours off one charge. The bad news is that if you’re playing with the cable attached and accidentally tug on it even slightly (or trip over it, as I’ve done with other systems), the Switch and dock are going to fly right off the shelf, kaboom, because they weigh so little. It’s enough of a worry for a klutz like me that I’m considering plugging the Pro controller’s cable into something that’s not the Switch dock. Affixing the dock to whatever you’ve set it on (with Velcro, say, or a two-sided adhesive) might not be a silly idea.

Summing up, Switch is so far everything I’d hoped it might be, save for the the part where I’m still generally clueless about its online abilities. Yes, so much depends on a red wheelbarrow-full of unreleased software. Whether third parties will ultimately flock or demur is a question only answerable if you’re clairvoyant. But the theory—of a device that both follows players and maybe, just maybe, revitalizes face-to-face engagement in this era of “alone together”—seems laid on solid footing so far.

Correction: An earlier version of this story reported the Switch employs an OLED screen, when in fact it is an LCD. 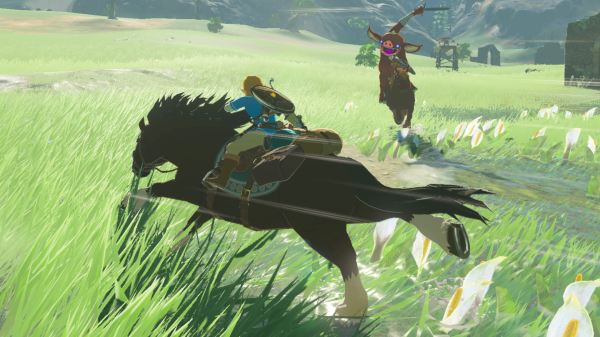 Watch Nintendo's Zelda Boss Unbox the 'Breath of the Wild' Limited Edition
Next Up: Editor's Pick