Evan Mawarire does not regret coming back to Zimbabwe, though he risks jail, abduction, torture or being “disappeared” by government thugs.

“This is where my family support network is, where my church is, where my roots are, where my life is,” the pro-democracy activist tells TIME of his hope for a new liberation struggle in the country. “For me the realization is if you don’t do something for your own nation, no one else will do it with the same passion you have.”

Mawarire, 39, turned from evangelical pastor to activist in April 2016, when a video he created criticizing the government of Zimbabwe’s President Robert Mugabe went viral under the hashtag #ThisFlag, provoking a storm of pro-democracy protests and turning him into the face of a movement. Forced into exile last year, he returned in February and was promptly arrested; he now faces a 20-year sentence for charges that include subverting the government and inciting public violence.

Now out on bail, Mawarire is keen to reignite a movement he midwifed close to a year ago that he hopes could lead to a change in the country’s leadership. He is also toying with the idea of running in the 2018 general election, but only if he “is called upon and the shoe fits.”

“I don’t want to close the door on going into politics,” Mawarire says. “This comes from the realization that there are many levels to contributing to the change that Zimbabwe needs.”

He says he decided to create the #ThisFlag clip, which spoke out against the country’s dysfunction, during a moment of clarity as he thought of his children’s future. “I kind of snapped… I have nothing to my name, not a dime, no property, nothing,” Mawarire says. “That is a horrible, horrible, prospect for my children… the longer I thought about it the more I realized we are in this situation simply because a group of people have not cared for 37 years.”

His eloquent soliloquy in the video struck a chord among Zimbabweans. The country run out of money in 2016, due to decades of economic mismanagement and corruption by Mugabe’s ruling ZANU-PF party. By June, #ThisFlag had tens of thousands of views and snowballed into an umbrella movement of various pro-democracy factions. On July 6, it led to a nation-wide shutdown— the largest protest the country has seen in a decade.

The regime took notice and Mawarire was arrested for a first time that month. But, in a scene straight out of a movie, his charges were thrown out by the magistrate on July 13 after some 150 lawyers stood up in court to represent him, while thousands amassed outside the courthouse in Harare’s Rotten Row. It was “extraordinary,” as they were all there in solidarity with what seemed to be a new liberation figure. “It gives me goosebumps to think about it” he says.

The victory was short-lived. His then-pregnant wife, Samantha, was being harassed by groups of men visiting their home and Mawarire had received a tip-off that he was “either to be arrested …or there would be an abduction” after his release from jail. Sometime at the end of July, Mawarire fled to South Africa before moving to an undisclosed location in the U.S., where his wife and three daughters still reside. Little more than six months later, he returned — and found himself back at the mercy of the authorities.

Resurrecting #ThisFlag as a symbol of popular resistance is proving harder than he anticipated; some supporters are reportedly resentful he fled last year, while others who remained had to face the brutality of Zimbabwe’s state security forces. Local NGO Counselling Services Unit (CSU) said in October that the country saw record levels of abduction, assault and torture against civil society actors and opposition members.

But the pastor remains optimistic. “I don’t think [support] has died down, if anything my return and arrest has proved to citizens that we do have a case to unite and to carry on,” he says. There is also perfect storm of socio-economic factors coming into play. While estimates vary, CIA World Factbook has unemployment in the country at 95% and many are worried the government’s introduction of a quasi-currency, called bond notes, will spell further economic disaster.

The country, once known as the breadbasket of Africa, has been using foreign currencies since 2009, when the discredited Zimbabwean dollar was scrapped after it reached a monthly inflation rate of 79.6 trillion percent. “[What] breaks my heart is seeing a generation wiped out because a government has not paid attention to things they should have many years ago,” Mawarire says. “The health, the economy … education.”

He wants young Zimbabweans to understand that “they are the ones that are going to be handed a country that is worthless if they don’t stand up.” More than half the country’s population is under the age of 25, and Mawarire hopes to mobilize what he calls “the largest group of first-time voters that we ever had in any point in Zimbabwe’s history.”

This might be idealistic; Mugabe has relied on vote rigging and campaigns of political violence to win the last two elections, and nothing suggests that the world’s oldest head of state, who turned 93 on Feb 21, is ready to loosen his grip. His wife, Grace, told supporters on Feb. 17 that her husband would trounce opponents in the next presidential elections even if he died and took part as “a corpse,” Associated Press reports.

The dictator loathes dissent, and has taken aim at Mawarire during a speech in 2016: “Beware these men of cloth, not all of them are true preachers of the Bible. I don’t know whether they are serving God. They spell God in reverse.” In 2015, activist Itai Dzamara never returned after being taken by force into an unmarked vehicle and Mawarire is no less vulnerable, despite his high profile.

But the pastor is hedging on Zimbabweans to be his salvation. “The way to be safe, at least for me, is to be with the people or stand with the people” he tells TIME. “Even if I do get arrested, even if I do get abducted, the cause remains and the support remains…victory for me looks like this, without a doubt, that Zimbabweans need to be the agents that change our government.” 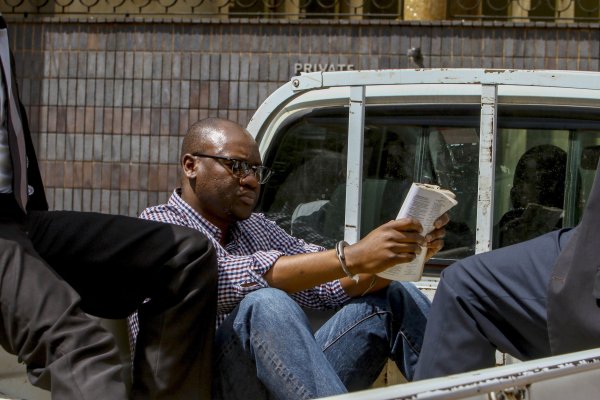