The son of a Chinese People’s Liberation Army general has allegedly incited violence against a judge in Hong Kong.

“I’m willing to give 10,000 yuan [$1,450] to anyone who beats up British ‘judge’ David Dufton,” Cai Xiaoxin, son of the late Major General Cai Changyuan, wrote on Weibo, China’s version of Twitter, according to the South China Morning Post. “I mean it,” he reportedly added.

Last week, Dufton found the officers guilty of assaulting activist and social worker Ken Tsang in October 2014, during the height of the territory’s 79-day pro-democracy protests, known as the Umbrella Revolution. He sentenced each of them to two years in jail, remarking that “the defendants have not only brought dishonor to the Hong Kong Police Force, they have also damaged Hong Kong’s reputation in the international community.”

The case attracted much attention in Hong Kong, not the least because the beating was caught by news cameras and broadcast on television.

Cai’s post was shared hundreds of times, according to the Post. Barrister Albert Luk told the Post that by inciting people to violently attack the judge Cai could be found in contempt of court.

Dufton’s ethnicity (he is Caucasian) has meanwhile been the subject of unprecedented slurs made by establishment figures disagreeing with his verdict and sentencing. Pro-Beijing lawmaker Wong Kwok-kin referred to an unnamed “white skin” judge with a “yellow heart” in the legislature last Friday. (The color yellow is associated with the Umbrella Revolution.) 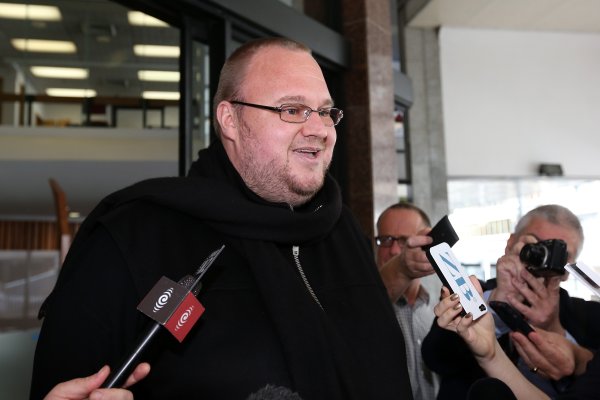 Kim Dotcom Can Be Extradited to U.S., Says New Zealand Court
Next Up: Editor's Pick