Iraqi forces launched an assault on the Western half of Mosul on Sunday, marking an intensification of the battle to reclaim the city from the ISIS militants who seized it in 2014.

The announcement of the attack marks the beginning of what could be an even tougher and more lethal phase of the fight for Mosul, the largest city that fell under ISIS control. The fight for the section of the city west of the Tigris River is expected to involve intense street-to-street fighting, complicated by the presence of hundreds of thousands of civilians.

“It’s a new dawn, a dawn of victories,” said Iraq’s Prime Minister, Haider al-Abadi, in a televised address announcing the operation on Sunday.

Mosul fell to ISIS control during the militant group’s sweeping advance across Iraq in the summer of 2014. After months of preliminary operations, Iraq’s armed forces launched an offensive to retake the city last October. Following months of bloody fighting, they succeeded in reclaiming the eastern half of the city, trapping ISIS fighters and civilians in an enclave on the western bank of the Tigris.

Iraqi special forces, federal police and allied militia groups have faced intense fighting in Mosul since the operation began. Arrayed against them, the forces of ISIS employ an avant-garde variant of insurgent warfare, including large networks of tunnels, snipers, and waves of suicide car bombers, many of them to lethal effect. The fight for the western half of the city is expected to include all of those elements, accelerating as the U.S. backed anti-ISIS forces close in on the extremists’ remaining stronghold in the city.

“Mosul would be a tough fight for any army in the world,” said U.S. Lt. Gen. Stephen Townsend, the commander of the coalition, in a statement last week.

On the first day of the operation, Iraqi forces captured a series of villages south of Mosul, in a push that also aims to retake Mosul’s airport. Separately on Sunday, a pair of suicide bombings killed five people, including three Iraqi soldiers in the government-controlled eastern section of the city, in attacks that illustrated ISIS’ continuing ability to attack beyond the conventional battlefield. The Islamic State’s bombers have carried out an unrelenting series of attacks on civilians throughout Iraq during the current military campaign, including a bombing at a car market in Baghdad that killed at least 51 people on Feb. 16.

Concern is mounting over the fate of civilians trapped in the ISIS-controlled sector of Mosul. The United Nations estimates that between 750,000 and 800,000 civilians are living in the western half of city with limited access to supplies. Stocks of food, fuel, drinking water and other vital supplies are running low in the western section, since the road connecting Mosul to Syria was severed three months ago.

“We don’t know what will happen during the military campaign but we have to be ready for all scenarios. Tens of thousands of people may flee or be forced to leave the city. Hundreds of thousands of civilians might be trapped — maybe for weeks, maybe for months,” said Lise Grande, the U.N.’s Humanitarian Coordinator for Iraq, in a statement.

The renewed offensive is also the first major turn in the conflict in Iraq since the inauguration of Donald Trump as president of the United States. Trump says he intends to launch an aggressive new strategy to defeat ISIS, but the specifics of that strategy have yet to be announced. In the meantime, Trump’s policies have threatened to complicate the already sprawling and complex fight against ISIS in both Iraq and Syria. Trump’s executive order banning immigration from seven Muslim-majority nations included Iraq, unsettling relations with a key state partner in that fight. Iraq’s parliament called for a ban on Americans entering Iraq, a step that, if implemented, would have created chaos for the more than 5,000 U.S. military personnel deployed in the country.

The Trump administration has also increased tensions with Iran, a step that could also have implications for the fight against ISIS in Iraq. Iran is a major regional power in Iraq, and Iraq’s regular army fights alongside powerful militias called the Popular Mobilization Units, some of whom are backed by Iran. 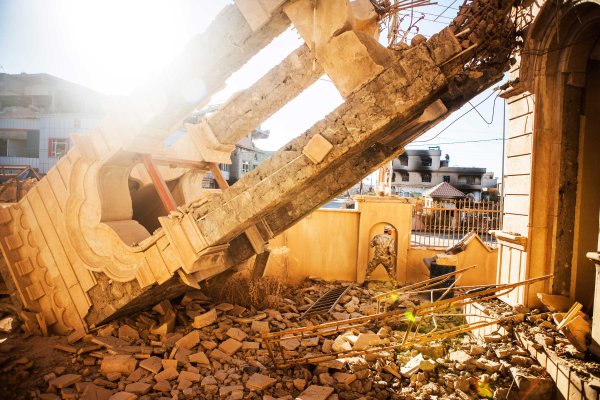 The Iraqi Photographers Documenting ISIS's Destruction
Next Up: Editor's Pick