The Mistake We Make When We Think About Donald Trump

Trump and Brady: Winners both—right?
Davidoff Studios Photography—Getty Images
Ideas
By Jeffrey Kluger
Jeffrey Kluger is Editor at Large for TIME magazine and the author of ten books, including Apollo 13, Apollo 8 and two novels for young adults. He has written more than 40 cover stories for TIME on topics ranging from space to human behavior to climate to medicine. Along with others at TIME, Kluger is an Emmy nominee for the web series A Year in Space.

Tom Brady and Donald Trump may be in very different fields, but the two men have one painful thing in common: They’d both surely like to forget the last few months.

Brady’s great misery played itself out on Feb. 5, when the once-great New England Patriots quarterback bumbled his way through the Super Bowl against the upstart Atlanta Falcons. Falling behind by 28-3, he snuffed his team’s last chance at a comeback when he hurled a desperation pass in the fourth quarter to wide receiver Julian Edelman — a pass that was easily intercepted, handing Brady the most humiliating defeat of his career.

Trump’s public humbling had been foretold for more than a year when he ran a presidential campaign animated mostly by invective and impulse and was swept aside by Hillary Clinton, who kept her head down, soldiered on, and was rewarded for her grit when she became the 45th President of the United States.

Wait. That’s not how it turned out.

Brady did fall behind 28-3 and he did hurl that bad pass, but thanks to good luck, a sharp eye or maybe just a fortuitous puff of wind, Edelman hauled it in. “I don’t know how the hell he caught it,” Brady confessed after the game was over and the Patriots had won. Hillary did soldier on and did stay focused and did beat Trump by nearly 3 million votes. But 77,000 votes out of more than 137 million cast — the political equivalent of a puff of wind — gave Trump an electoral college victory and thus the presidency.

So Brady is known as the imperturbable field general who executed the greatest comeback in Super Bowl history and Trump is the intuitive populist, who may have run an unlovely campaign, but knew how to tap into the frustrations of middle class voters. The contradictory histories — Brady and Trump as both winners and losers — are equally, historically valid. But both wound up winning, so both, we conclude, did things right. It’s the kind of reverse reasoning that rhetoricians and logicians windily call post hoc ergo propter hoc. Whatever name it goes by, it’s a problem.

History is very good at the first four parts of the who, what, where, when and why formulation. Which country won what war in what year on what continent. But the why part? Not so much.

The exact cause and effect of any event can be impossible to tease out, and that doesn’t sit well with a nominally rational species like ours. We need to see the why in events—or, as ex hoc ergo propter hoc would have it, “after this, therefore because of this.”

And so we construct competing narratives about events—sometimes even as those events are playing out—and then choose the one that makes the outcome make sense. In the moments Brady’s pass was airborne, he was the sports equivalent of the Schrödinger’s cat, the subject of the quantum physics thought experiment, both dead and alive inside a box until an observer opens the lid and determines the outcome. Brady, similarly, was both hero and has-been for a fleeting instant until Edelman’s sure hands decided the matter.

In football, the stakes involved in this kind of thinking are low. Overlearn the lessons of the Patriots’ win—assume it’s never a problem to fall behind 28-3—and you’re going to lose a lot of games. In politics—to say nothing of economics or warfare—it’s a very different matter.

In the immediate wake of the 9/11 attacks, commentators spoke in frightened wonder of the evil genius of Osama bin Laden—especially the way he got our attention when the first plane crashed into the first tower, so that the whole world would be watching when the second one hit. Never mind that the planes were being flown by amateur pilots who took off 15 minutes apart and couldn’t have hit the towers simultaneously even if they’d tried. But it served our short-term interests to see bin Laden as a brilliant monster — the better to explain how we’d been blindsided so badly — even if it left us in too much fear of a small, nihilistic man whose ostensible genius involved nothing more than patience and planning.

Market bubbles can be similarly the result of past-tense reasoning—usually until just before the crash. After this (the happy run-ups in the dot-com and housing sectors), therefore because of this (dot-coms are the investment of the future and housing goes in only one direction: up). Then it all falls apart.

Politicians and commentators are similarly overlearning the lessons of the Trump presidency. See how the President distracts us with an inflammatory tweet at the very moment there’s a larger, more important matter he doesn’t want us to notice. Smart! his supporters say. Diabolical! his detractors answer. Maybe. Or maybe Trump tweets are like Trump hiccups — they happen when they happen.

Worse will be if both parties take the 2016 results as roadmaps for 2018 and beyond. The GOP would be ill-advised to continue relying overwhelmingly on a constituency of older, white, blue-collar supporters — real as those voters’ pain may be and important as their concerns are. The Democrats, meantime, would be wrong to abandon their more diverse constituencies of women and minorities and the LGBTQ community — even if future campaigns should be less about demographic box-checking than the last one was.

George Santayana may be rightly celebrated for that whole idea that people who don’t learn the lessons of history are doomed to repeat it. But what the great philosopher forgot to stipulate is that those lessons have to be the right ones. 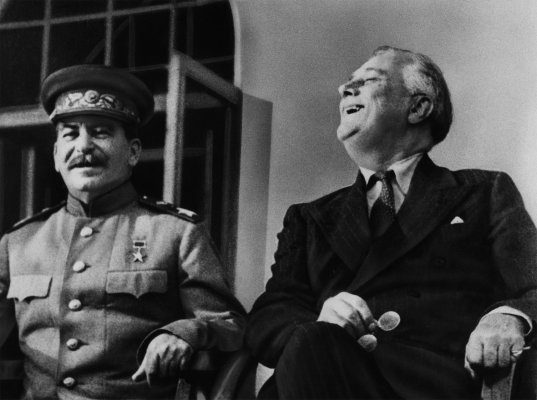 Why Populist American Leaders Love Russia
Next Up: Editor's Pick