Three former members of the U.S. women’s national gymnastics team say they were sexually abused by the longtime doctor for the sport’s governing body.

On CBS’s 60 Minutes on Sunday, Jamie Dantzscher, Jeannette Antolin and Jessica Howard alleged that Dr. Larry Nassar began abusing them as teenagers in the 1990s. In each case, the women say Nassar told them that he was performing medical procedures to improve their health and address their medical problems. As part of this, the women said, Nassar inserted ungloved fingers in their vagina or rectum on repeated occasions and for lengthy periods of time.

“He would put his fingers inside of me and move my leg around,” Dantzscher told 60 Minutes. “He would tell me I was going to feel a pop. And that that would put my hips back and help my back pain.”

The women, all minors when the alleged abuse began, recalled being conflicted over what they felt was happening and the sense that they should trust a doctor charged with their care.

“I remember being uncomfortable because of the area,” said Antolin, who was on the national team from 1995 to 2000 and competed at the 1999 world championships. “But in my mind, I was like, If this helps, I’ll do anything. It was treatment. You don’t complain about treatment.”

The three women are the most prominent gymnasts to accuse Nassar of abuse. Dozens of others, including students at Michigan State University (MSU), where Nassar was a doctor for a number of sports teams, have made similar allegations. On Feb. 17, a judge ruled that Nassar will stand trial in Michigan on three sexual-assault charges stemming from incidents at his home in the early 2000s. The alleged victim in that case was the daughter of a family friend.

Nassar has also been charged with the federal crime of possessing child pornography. Last December, he was held without bond when FBI agents investigating the abuse charges from gymnasts and students found 37,000 child pornography images and videos at his home, some of which he had stored on computer hard drives that he attempted to throw out in a trash bin. The FBI also has Go Pro video of Nassar allegedly molesting girls in a pool.

Nassar is licensed in the state of Michigan to practice osteopathic medicine. He pleaded not guilty to the charges filed against him in Michigan, and maintains that the procedures he performed on the gymnasts were legitimate.

While rare, practitioners occasionally use intra-vaginal techniques to relieve pain. But the therapist is expected to wear surgical gloves in all circumstances and have a chaperone present if the patient is a minor. The gymnasts say they were often alone with Nassar and he did not wear gloves.

Nassar was the team doctor for USA Gymnastics from 1996 to 2015 and served as team physician for several sports at MSU from the 1990s to 2015. The doctor also served as a physician for Twistars, a Michigan gymnastics center.

In January, 18 more people, some of them still minors, filed suit against Nassar over the alleged abuse.

John Manly, the lawyer for the three gymnasts and many other alleged victims, says his clients have reported abuse by Nassar beginning as far back as 1996. It was nearly a decade later before MSU or USA Gymnastics conducted their own probes into Nassar’s conduct.

MSU investigated charges filed against Nassar by a recent graduate in 2014, but did not find evidence of misconduct. USA Gymnastics said in a statement that it wasn’t made aware of the allegations against Nassar until June 2015. When USA Gymnastics first received a report of “an athlete’s concern” from a coach, the organization notified the FBI.

Neither MSU nor USA Gymnastics notified each other of their investigations. USA Gymnastics fired Nassar in July 2015; MSU terminated him several months later.

The charges against Nassar highlight a dark side of competitive sports, where adults in positions of power can exploit the vulnerability of their young, eager charges. The three former gymnasts say their sport was particularly ripe for abuse. For elite gymnasts, participating in USA Gymnastics programs is the only route to making the world championship and Olympic teams, which means the organization’s authority figures have tremendous influence over an athlete’s career.

As the national team physician, Nassar was present at the training camps held outside of Houston at the home and gym of the prominent national team coordinators Bela and Martha Karolyi. For an elite young gymnast, an invitation to one of those monthly camps was coveted.

Howard, who saw Nassar at the ranch for hip problems, said on 60 Minutes that she interpreted her time with the doctor as a sign of her potential as an athlete. “I was lucky to be at the ranch working with him,” she said.

The gymnasts said they talked about their experiences with each other, but all felt that they had no choice but to continue. “The girls would say ‘Yeah he touches you funny,’” Howard, a three-time rhythmic gymnastics national champion, said. “He started massaging me. And he had asked me not to wear any underwear. And then he continued to go into more and more intimate places. I remember thinking something was off but I didn’t feel like I was able to say anything because he was, you know, this very high-profile doctor.”

In a written statement, USA Gymnastics board chairman Paul Parilla and CEO Steve Penny said: “Regarding Dr. Larry Nassar, USA Gymnastics is appalled that anyone would exploit a young athlete or child in the manner alleged. When USA Gymnastics first learned of athlete concerns regarding Dr. Nassar in the summer of 2015, the organization acted without hesitation.”

But as testimony by USA Gymnastics officials in other cases of sexual abuse by coaches revealed, the organization apparently had a policy of not acting on abuse allegations unless a complaint was reported by a victim or the victim’s parent. As an investigation conducted by the Indianapolis Star revealed, that meant coaches who had been fired for suspected sexual misconduct could easily be hired by another training facility.

USA Gymnastics has hired an independent reviewer to investigate its policies and procedures regarding reports of sexual abuse. The organization says it will consider modifying its practices depending on the results of the review, which is due later this year. 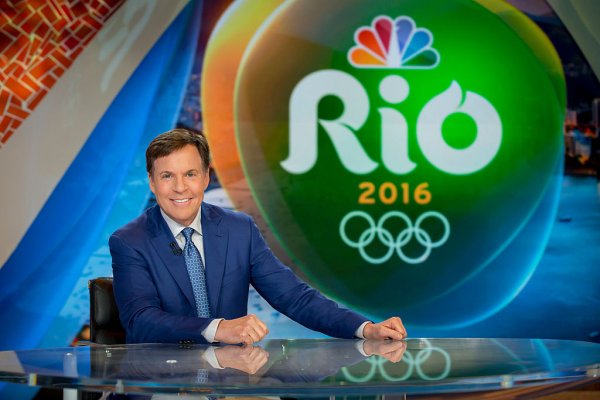 Bob Costas Says He’s No Longer Hosting the Olympics
Next Up: Editor's Pick