Republicans used town-hall meetings in 2009 to help channel outrage at the sitting president and take back Congress the next year. But now that they’re in control of Washington, Republican lawmakers are finding they’re the ones in the hot seat.

Since the beginning of the year, Republican town halls across the country have turned into raucous affairs, with local constituents showing up and chanting, asking pointed questions and sometimes disrupting events. Members of Congress are steeling themselves for boisterous town halls in the coming months, when they expect continuing confrontations with protesters in their districts angry over President Trump’s actions.

Viral videos of protesters challenging lawmakers over the upcoming repeal of the Affordable Care Act, Trump’s connections with Russia and the ban on refugees from seven Muslim-majority countries have helped fuel further protests.

For Republicans in Congress, a nagging question is how to deal with the grassroots outrage. Some are cutting down on their schedule of town hall events, and there are fewer scheduled for the recess next week compared with Democrats. Twenty-one Republican lawmakers have town hall meetings scheduled next week, according to a tally by the Capitol Hill newspaper Roll Call, while 27 Democrats have events.

Some Republicans, fearful of embarrassing spats with protesters, are turning instead to more carefully managed “virtual meetings” with call-ins from constituents. The number of town halls Republicans are holding in the first couple months of 2017 is down compared with the number of events in 2015.

Others are bracing themselves for inevitable encounters with protestors.

“I’m not afraid of protesters. This is an open country; people have an opportunity to come express themselves,” said Senate Majority Leader Mitch McConnell, who was confronted by protestors at the airport last week in Louisville during a trip home. “As long as they do it peacefully I’ve got no problem with it.”

Rep. Jason Chaffetz, who heads an oversight committee, faced an angry crowd at home in Utah earlier this month, where a crowd chanted “do your job” and demanded that he investigate Trump’s financial conflicts of interest. The Utah Republican struggled to make himself heard over the crowd.

“I was a placekicker at one point in college so you get used to people kicking and screaming at you,” Chaffetz told TIME. “The far-left progressives, if they think they’re making progress by shutting down the dialogue, I think the public figures that out pretty quickly. It’s not productive. In fact, it’s counterproductive and it exposes the Democrats for who they are.”

Rep. Mark Sanford, the former governor of South Carolina, said that he was embracing the open forums as a way to interact with his constituents. On Saturday, the Tea Party Republican is holding a town hall in conjunction with the progressive grassroots group Indivisible, which has been focused on protesting President Trump since his election.

“I believe that there’s a requirement for any of us who hold office to be available whether we like what we hear or we don’t,” said Sanford. “I believe in the Socratic process of bouncing ideas back and forth and that there’s something fundamentally american about agreeing and disagreeing on ideas that one feels strongly about.”

The Democratic Congressional Campaign Committee has counted two Republican-held in-person town halls next week during the recess, by Rep. Scott Taylor of Virginia and Rep. Leonard Lance of New Jersey.

Progressive groups are scrambling to channel the outrage. Indivisible, along with MoveOn.org and former President Obama’s group Organizing for Action are developing tools to help protesters find town halls in their district and develop questions.

Priorities USA Action, the super-PAC that funded advertisements for Hillary Clinton during the presidential election, announced on Friday it is launching digital ads to provide activists with information about events in their area.

Many Republicans have dismissed the swelling protest movement as “astro-turf” paid for by Democratic donors.

“They have a strategic approach. I think we’re going to have a demonstration a weekend and if they can have the same subject last for two weekends, they’ll consider that a victory,” said Rep. Steve King of Iowa. “It’ll happen until the public revolts at the idea or they run out of money.”

Correction: The original version of this story misstated Rep. Andy Harris’ plans. An aide in his office says Harris plans to hold town hall meetings once a replacement plan for the Affordable Care Act is put forward and that he did not not cancel a town hall meeting. 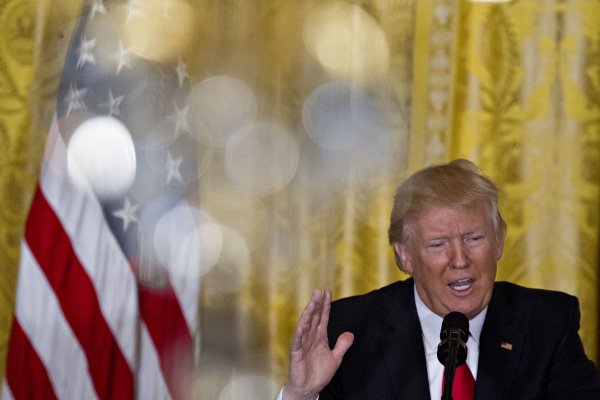 GOP Agenda Stuck in Neutral
Next Up: Editor's Pick