Rob Kardashian and Blac Chyna‘s romance has come to an end — PEOPLE can confirm the fiancés have called it quits.

“They split a while ago. The wedding plans are off,” a source close to Kardashian tells PEOPLE. “They are both trying to be mature about it. It was less dramatic this time.”

The volatile couple, who first split in March 2016, experienced their fair share of ups and downs, right from the outset.

The pair went public with their relationship in January 2016 and initially raised eyebrows due to Chyna’s complicated history with the Kardashian-Jenner family: Chyna shares a son with Rob’s sister Kylie Jenner‘s longtime boyfriend Tyga, and is also best friends with Amber Rose, an ex of Kanye West, who is now married to Rob’s sister Kim Kardashian West.

Rob, 29, proposed to Chyna, 28, in April 2016, and a month later, they announced they were expecting their first child. The two welcomed their daughter, Dream Renée, in November.

The proposal itself raised issues as his family chose to remain silent and didn’t acknowledge the news of their engagement. At the time, sources told PEOPLE it caused major friction within the Kardashian-Jenner clan, with Kylie and sister Khloé Kardashian taking the news the hardest.

The family eventually came around, but filming their E! reality show Rob & Chyna put a strain on the relationship and stressed out Rob, who had previously lived as a reclusefor two years prior to his relationship with the model/entrepreneur. Much of their fighting was documented on the show, including screaming matches, therapy sessions and even a paternity test.

Things took a turn for the worse in their relationship just before Christmas when a fight nearly ended their engagement. Chyna moved out of their shared home with their newborn in tow — not much of a surprise as the two had spent some time living separately following Dream’s birth. Chyna’s Instagram was allegedly hacked around that time and she claimed in a since-deleted post that Kardashian was behind the hack.

But the new year appeared to have brought good tidings to the couple, who spent New Year’s Eve together. And weeks later, Kardashian shared a sweet video to Instagram that showcased home footage of the couple kissing, cuddling and laughing throughout their yearlong relationship. “1 year down lol woohoooooo happy anniversary babbbbbbiiiiiiiieeeeeee,” he captioned the video.

In happier times, Rob exclusively told PEOPLE that Chyna got him through his “darkest times.”

“I’ve been friends with Chyna for a long time,” he said in August. “She was someone I reached out to for advice. She would cook for me and we’d just talk. She’s surrounded me with a lot of positivity. From the moment we met, I knew I wanted to be more than friends.” 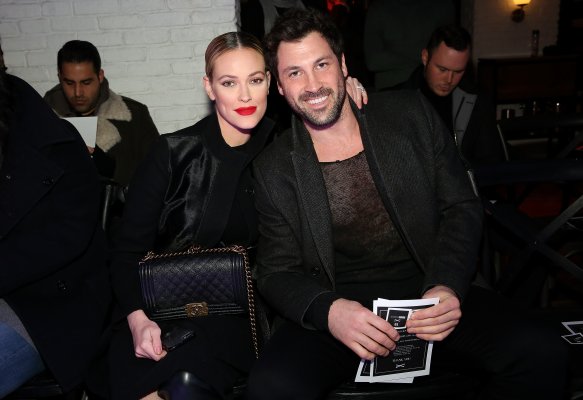 Peta Murgatroyd and Maksim Chmerkovskiy Show Off Son Shai
Next Up: Editor's Pick