One Social Media Mistake That Can Make You Seem Narcissistic

Social media is an easy way to keep friends up-to-date on the good things happening in our lives, like when we get a promotion, or run a new personal best, or just really, really love our new haircut. But those self-focused posts can be perceived as bragging and can even cast us in a negative light—especially among those who aren’t in our real-life friend circle, according to new research.

In other words, say the study authors, those closest to you might appreciate your all-about-me updates. But you might want to be careful about the impression they could make on other members of your social networks, like colleagues or potential employers.

For the new study, which appeared in the journal Cyberpsychology, Behavior, and Social Networking, researchers asked 136 volunteers in the United Kingdom to rate their impression of four (theoretical) women, based on their Facebook timelines.

RELATED: These 8 Stores Have the Best Return Policies

If you’ve ever rolled your eyes at a Facebook friend’s endless self-promotion, you may be able to guess what happened: When participants were shown posts in which the author talked about herself, they had lower opinions of her. In fact, they were less likely to find her physically attractive, think they’d be friends with her, and have confidence in her abilities.

Complimentary content posted by the women’s friends didn’t have the same negative effect: When participants viewed posts such as, “I don’t know what I’d do without you, you are such an amazing friend,” they were more likely to see the woman as someone they’d also be friends with.

This doesn’t mean that all of your Facebook friends hate your selfies and most personal status updates, though. The authors point out that the participants in their study were viewing the profile of someone they didn’t know personally. So it’s possible that “the negative impact of perceived bragging may be enhanced, or even apply exclusively, in zero-acquaintence relationships,” they write.

But they also point out that many people have broad social networks, and may be friends with or followed by people they’ve rarely or never met in real life. It’s possible that self-focused posts aimed at one group (your close friends) may be misinterpreted as bragging by everyone else.

Most people portray themselves accurately online, says lead author Graham Scott, PhD, a lecturer in psychology at the University of the West of Scotland, so they shouldn’t worry much about being perceived differently online versus offline by those closest to them. (Research also shows, for the record, that not everyone who posts selfies is a narcissist.)

“The danger comes when people who we don’t know as well offline, and who aren’t in our main social group, view our posts,” he says. “These can seem more ambiguous to them because they’re more psychologically distant and thus more likely to misinterpret something we say.”

Also, he says, people should decide exactly what they want to use each of their social-media platforms for. “If they want to use it to network, that’s fine, but they need to be aware that a lot of different individuals from different walk of life are going to be viewing what they post,” he says.

RELATED: 9 Products You Need for a Better Selfie

This isn’t the first study to back up the idea that self-centered social media posts are generally seen as unattractive; a2015 Harvard study, for example, found that even “humblebragging”—the use of false modesty to hint at something good about yourself—makes people less likeable.

In a press release for the new study, Brenda K. Wiederhold, PhD, editor of Cyberpsychology, Behavior, and Social Networking, summed up the research in this way: “While humble bragging seems to be perceived as the least attractive form of bragging, it is important that we develop greater awareness of how our social networking posts may be perceived by our friends, co-workers, and acquaintances.” 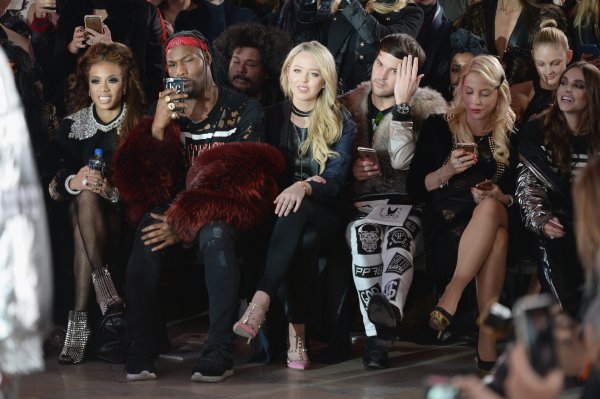 What Really Happened During Tiffany Trump's NYFW 'Snub'
Next Up: Editor's Pick