“She was surrounded by photographers, and the two women who moved were leaning away — they clearly didn’t want to be in those photographs,” says Binkley, who was seated a few seats down from the first daughter.

She adds: “But I don’t think Tiffany really noticed that, because she was active with her friends and the photographers.”

However, Nikki Ogunnaike, senior fashion editor at Elle, tweeted that the show started late due to chaotic seating changes, with editors at the show “fleeing” so they wouldn’t have to sit around Tiffany. (Her account is now private.) In response to a similar tweet from Alyssa Vingan Klein, editor-in-chief of Fashionista.com, Ogunnaike said she was with others down the hall.

Later on, just before the show began, executives from Philipp Plein came over to ask the current occupants to clear the seats for Plein’s family members, including his sister and girlfriend, Binkley says.

“It’s easy to assume from a photograph that she sat there, humiliated, with empty seats by her, which wasn’t the case,” Binkley says.

The incident made headlines and led to Whoopi Goldberg offering to sit next to Trump, 23, later this week. Plein himself also defended her.

“Tiffany Trump is not a politician, she’s a teenager,” Plein told TMZ.

Binkley adds: “No one was mentioning Trump or addressing the Trump family directly. This was the only real Trump clash I encountered the whole week.”

Other photos show Trump with no empty seats around her.

Binkley says that if she had known that her tweets would gain traction after posting, she would have followed up sooner on what happened after the show.

Though NYFW was more political this year than Binkley has ever seen it, she says no designers mentioned the president or the Trump administration specifically in their shows. 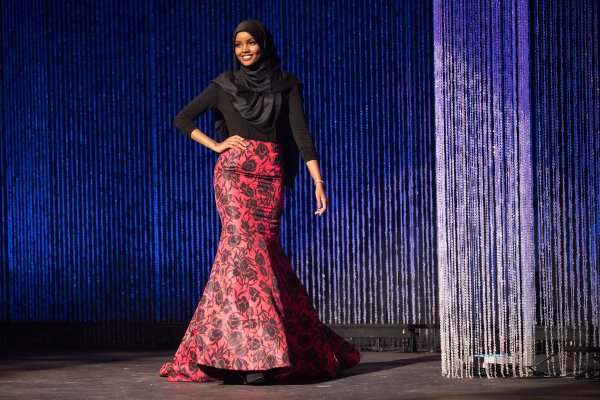 Meet the Muslim Model Who Walked in Kanye West's Yeezy Show at NYFW
Next Up: Editor's Pick