Four months ago, Halima Aden was just another college student in St. Cloud, Minnesota. But now the teenager, who made headlines in November as the first Muslim woman to compete in the Miss Minnesota beauty pageant wearing a hijab, is a full-fledged model. She walked in her first runway show Wednesday — and it just happened to be Kanye West‘s Yeezy show.

“It’s unbelievable. I never thought that I would see a hijab-wearing model walking in such a prestigious event, but it makes it even more exciting that it was me,” Aden, 19, tells PEOPLE.

Just five days before her runway debut, she signed with IMG Models, one of the top agencies in the world.

“I literally screamed, I was just so excited, I couldn’t believe it,” Aden says of the moment she got the call from IMG. “I felt like: Finally. I get to represent. I get to be the change I wanted to see for other young Muslim women, and just for women in general, to never change and stay true to themselves.”

While she didn’t grow up wanting to be a model, Aden’s goal when she took on the Miss Minnesota pageant was to provide young people with the Muslim role model she didn’t have as a little girl. Working with IMG allows her to do just that.

“I didn’t really have modeling on my mind, I just wanted to do the pageant because I wanted to spread a positive message about Muslim women,” Aden says. “For a really long time I felt misrepresented, even growing up, I had no one to look up to, there weren’t any hijab-wearing models that I knew, or people in the media that you could relate to.”

Already she has an impressive portfolio; she’s spent the last few days jetting around the country for shoots.

“I think this is my fifth job, it’s really exciting. The fact that a Muslim woman could have media attention — and it being positive — has been amazing,” Aden says. “It drove home the message that diversity is American, it’s beautiful, and it’s something that we should be proud of.”

“I didn’t win the pageant, but I’m winning big now. Thanks to the relationships I formed at the pageant, I am where I am now.”

Plus, she got to meet Kanye.

“He was so nice, and I just remember being like, ‘Oh my god! I’m standing in front of Kanye! Who would’ve ever thought,” Aden says. “He was just making sure I was welcomed into the show.” 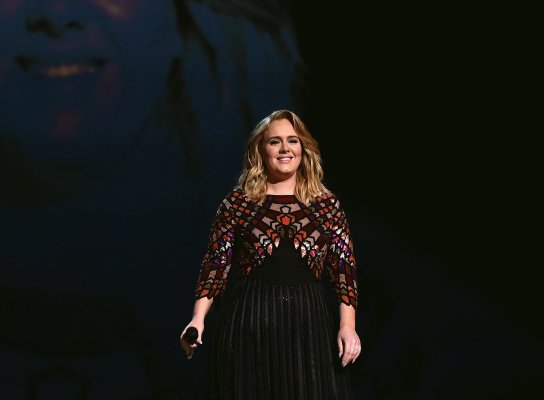 Try the 7-Minute Ab Workout Adele's Trainer Swears By
Next Up: Editor's Pick