Jordan Peele: Get Out 'Explores Why Black People Are Afraid of White People'

For Jordan Peele, comedy was a 15-year detour. Five seasons on MADtv. The award-winning Comedy Central sketch show Key & Peele. And Keanu, his movie with comedy partner Keegan-Michael Key about a kitten catnapped by gangsters. All pit stops on the way to his ultimate goal: horror director. Peele’s directorial debut, Get Out, which hits theaters on Feb. 24, is the realization of a dream that he says has been “on the back burner all along.”

In a midtown Manhattan hotel some 12 blocks from where he grew up, Peele, 38, explains why he and the genre got off to a rocky start. “I was deathly afraid of horror movies until about 11 or 12, and then I began to respect something that could affect me so deeply.” A passionate cinephile as a kid, he and his best friend had a weekly tradition of scrounging up loose cash for a trip to Tower Records to round out their VHS collections (Peele’s counted more than 300). But as his love of film inspired dreams of directing, it also set a high bar.

“I felt like I could never make a movie as good as my favorites,” he says. So when he discovered a knack for sketch and improv comedy, while in college at Sarah Lawrence in New York, he pursued it. “If I do my job right,” he says he thought, “maybe I’ll get to a point where I can shift gears.”

He did it right—if an Emmy, a Peabody Award and a run as President Obama’s most famous impersonator are any indication—and now, finally, he’s shifting gears. In Get Out, Rose (Allison Williams), who is white, brings her boyfriend Chris (Daniel Kaluuya), who is black, to meet her parents (Catherine Keener and Bradley Whitford) in a tony Connecticut hamlet. When he asks if she has told them that he’s black, she reassures him that her dad isn’t racist: “He would have voted for Obama a third time, if he could have!” They arrive, and a warm welcome gives way to ominous hints that something is seriously awry. Ultimately, Chris’ life depends on heeding the film’s title.

Sharp and sardonic, Get Out has already garnered rave reviews, including a rare 100% “fresh” rating on Rotten Tomatoes, and may have an outsize opening weekend for the genre. The film is a spooky social thriller in the mold of Rosemary’s Baby. As a fan of that film, Peele says he could relate to the experience of female oppression through Mia Farrow’s performance. “I’m allowed into a female’s perspective in this situation where people are making decisions about her body for her,” he explains. “I’m not identifying with the men in this movie.” When he sat down to write Get Out, he began to think the same could and should be done for race.

The result is an examination of racism—not of the cross-burning, violent kind, but of the insidious variety that persists in liberal, upper-class circles. “When Obama was elected, for eight years, we lived in this postracial lie,” Peele says. He kept noticing “subtle, seemingly harmless interactions”—like dialed-up zeal for Obama—that served as a reminder that racism still thrives. “If we were in a postracial society,” he says, “I would not feel like a token black guy in a room full of white people trying to connect with me about basketball.”

Fans of Key & Peele will find familiar themes in the movie. Its opening scene recalls a 2013 sketch in which white people nervously summon their children inside as Peele, in a hoodie, walks past their homes. “The conventional dynamic people understand is white fear of the black neighborhood,” says Peele. “In recent times, we’ve been dealing with the fact that black people have a lot to fear in a white neighborhood. This movie explores why black people are afraid of white people.”

Peele, whose wife, the comedian and Brooklyn Nine-Nine actor Chelsea Peretti, is white, has charitably laughed away questions about a possible autobiographical strain to the movie’s plot points, though not its broader take on what it’s like to be a black man in America. He wrote it before he met Peretti, envisioning the interracial relationship between Chris and Rose as both a vehicle to introduce Chris into his imperiled situation and as a way in for the audience. Inspired by Guess Who’s Coming to Dinner, he wanted moviegoers to be able to relate to the universal source of Chris’ anxiety: the stress of meeting potential in-laws.

Some will say the film’s subversive nature begins with the simple fact that its main character is black. Though it’s by no means unprecedented for the genre—think Duane Jones in Night of the Living Dead, Denzel Washington in Fallen, Tony Todd in Candyman—black characters have a rich history of being offed early in horror films. It’s become such a trope, in fact, that more than a handful of websites have dedicated themselves to proving or disproving the notion of what one site calls “The Black Death.” For Peele, though, the race of his lead is hardly the most revolutionary aspect of the movie. The fact that it’s about race is.

The era during which Get Out was conceived feels worlds away from the one in which it’s finally being seen. The Obama-era microaggressions that inspired the story persist, but they are eclipsed now by the increasingly frequent and overt displays of hatred and intolerance of the kind that many had mistakenly assumed to be history: a burning cross on the grounds of a historic black church in Texas, swastikas and racial slurs spray-painted in the home of an interracial couple. Peele’s metaphor for the vast spectrum of racism in America is that classic horror villain: the monster. “It has the side of it that’s sort of cute, peeking above the water, and then it has this deep, dark thing that for awhile was lurking below—and doesn’t seem to be anymore.” He’s not sure how Get Out will contribute to the conversation. He’s just hopeful that it will.

Get Out represents eight years of Peele’s thinking and writing on race. There’s more, he promises, where the film came from. Never one to self-censor, he recently addressed critics who suggest that comedians refrain from taking on politics. “Be careful what y’all wish for,” he tweeted. What did he mean exactly? He scratches his stubble and smiles. “Be more scared of our art than our tweets,” he says. “You don’t want comedians against you.” Or, for that matter, horror directors. 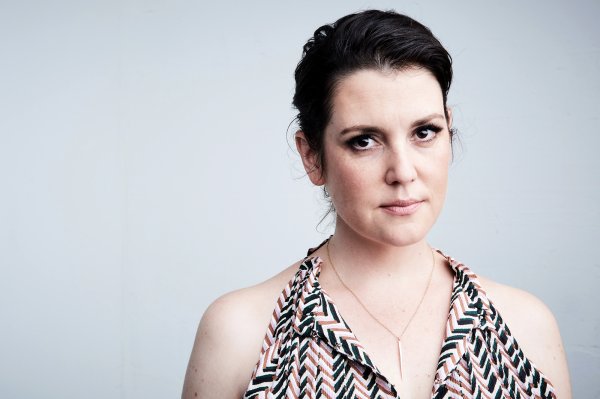 Melanie Lynskey on Her Alien Childhood and the Importance of Picking Up Dog Poop
Next Up: Editor's Pick