Rapper Jidenna Gets Passionate and Political at His Debut Album Premiere

On Thursday night, rapper Jidenna gave the premiere performance of his debut album The Chief, the full-length follow-up to his breakout 2015 single “Classic Man.” Born in Wisconsin and raised between Nigeria and Massachusetts, the musician stayed on the radar in 2016 with guest spots on HBO’s Insecure and Netflix’s Luke Cage, giving fans something to savor while awaiting his first album.

At a swanky premiere party at the Kola House nightclub in Manhattan’s Meatpacking District, the sharp-suited rapper took to the stage to perform his new music as the first of Pepsi’s Sound Drop artists, playing for a packed crowd that included Janelle Monáe. (He’s a protégé of the musician and Hidden Figures actress, who signed him to her her record label.) Where the Grammy-nominated “Classic Man” cemented Jidenna’s sharp, almost acoustic sound and image—in contrast with the staccato loops and casual style of contemporaries like Migos and Chance the Rapper—The Chief is an eclectic mix of African-influenced and American rap, all telling his story as a Stanford-educated rapper navigating the American experience. It spans not only moods and genres but subjects, from heartache to masculinity to politics.

“It’s hard to have Moses without Pharaoh,” Jidenna riffed in an impassioned moment onstage, referencing the political landscape. “For the last eight years, we had a beautiful family as the leaders of this country, and we got comfortable. We got so comfortable that we forgot how to be aggressive about being progressive.” After his remarks were greeted with whoops, he descended from the stage to dance exuberantly through the crowd. 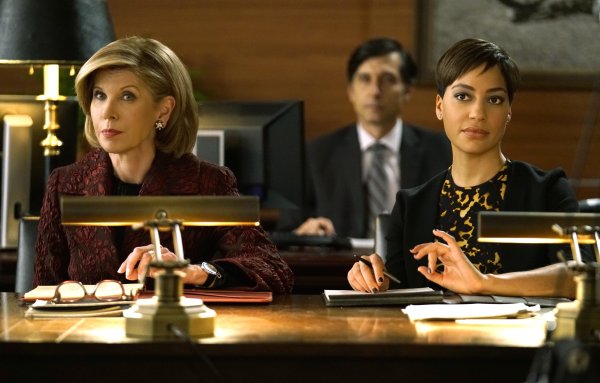 How The Good Fight Was Rewritten to Be a Show About the Era of Donald Trump
Next Up: Editor's Pick