Here's What Was in the First-Ever Daily CIA Brief to a U.S. President

The brief that the U.S. President receives each day from intelligence officials has been a key form of communication between the CIA and the President since 1961, when authorities first delivered a pocket-sized pamphlet to John F. Kennedy. Since then, the daily briefings have persisted and evolved with each leader, with the format of President Donald Trump’s intelligence briefings bringing the subject back into the headlines.

While the contents of Trump’s briefings are, unsurprisingly, not open to the public, important parts of the history of the President’s Daily Brief have been declassified, and in 2015 the CIA released the earliest incarnations of the brief.

When authorities gave President Kennedy the first version of the intel briefing in 1961, it was then called the President’s Intelligence Checklist, or PICL (pronounced “pickle”). The Bay of Pigs Invasion had just taken place in April, and Kennedy wanted to be sure he was receiving succinct information about national security threats daily, according to the CIA. His Senior Military Aide, Major Gen. Chester Clifton, suggested the information should come in a form small enough to slip into the President’s pocket, so he could carry it with him throughout the day.

At 8-by-8.5 inches and with three or four items per page, the pamphlet contained 14 summaries of activity around the world. The first item was the belief that the Soviet Party Central Commission was starting secret meeting that day, at which it would change high-level personnel within the organization; another item stated “first Soviet jet fighters probably delivered to Cuba.”

Some of the intelligence was more subtle, such as a paragraph about how the Philippine Foreign Minister was worried about the “direction of U.S. policy.” Due to redactions, it’s harder to tell what some of items actually say — one simply reads “Japan,” and another “Brazil.”

The first PICL was evidently a success, as Kennedy kept receiving them and they grew in length from the original seven pages presented the first day. After Kennedy’s assassination, President Lyndon B. Johnson started receiving slightly longer reports less frequently and did not rely as much on the PICL, until the CIA revamped the PICL as the President’s Daily Brief (PDB), which would combine the brevity of the PICL with the analysis that Johnson favored.

The PICL was fully phased out in November of 1964, and Johnson got the first non-trial PDB on Dec. 1 of that year. Since then, Presidents have received their PDBs over different mediums and at different times each day. Henry Kissinger, the National Security Advisor to President Nixon, for example, pushed for longer versions with more context and analysis. George H.W. Bush preferred an in-person briefing, so he could communicate with the briefer and request more information. Starting in 2014, President Obama read his briefings daily on a tablet.

And today’s PDB isn’t the only legacy of the PICL. It also gave the Agency a nickname: “the pickle factory.” 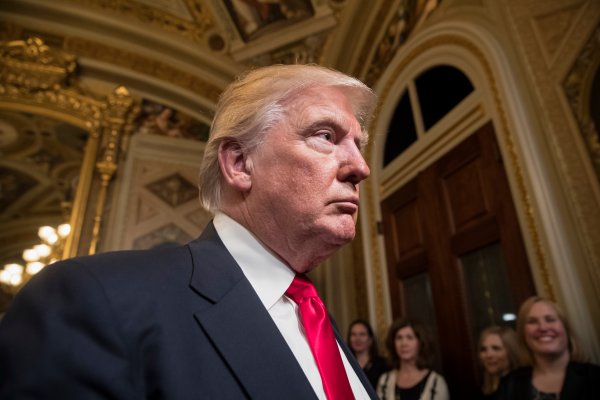 Trump Set for Visit to CIA
Next Up: Editor's Pick