Sorry, Brits: Abe and Trump Have the Real 'Special Relationship'

President Trump rolled out the red carpet for Japan’s Prime Minister Shinzo Abe on Feb. 10 for three days of lavish praise, elaborate dinners, lots of golf and a ride on Air Force One. More important, the two leaders appeared to make real progress on major economic and security deals. Compare that with what’s beginning to look like an awkward Trump relationship with Britain and it’s easy to see that the U.S. and Japan have the new “special relationship.”

There’s a reason Abe was the first foreign leader to fly to meet Trump in November, just days after his victory. As China rises and North Korea flexes, Abe needs a lot from the U.S. President. First is his commitment to sustained engagement in Asia. In particular, Abe wants Trump to continue to honor the 1960 U.S.-Japan Treaty of Mutual Cooperation and Security and reaffirm that it applies to islands in the East China Sea claimed by both Japan and China.

Abe also wants the U.S. to boost Japan’s military capabilities. He wants missile-defense protection, all the more important given North Korea’s test of a ballistic missile on Feb. 12, and closer links to U.S. early-warning radar and satellite networks. Finally, Abe has long dreamed of acquiring a better offensive strike capability to deter both China and North Korea.

Trump has a wish list too. He wants a free-trade agreement that will open long-restricted sectors of Japan’s economy to U.S. companies. To Abe’s dismay, Trump killed the Trans-Pacific Partnership, an enormous deal involving the U.S., Japan, and 10 other countries, not including China. A new deal with Japan would help Trump prove he cuts better deals than Barack Obama did. Trump will also welcome the U.S.-Japan Growth and Employment Initiative that Abe brought with him. By increasing Japanese investment in U.S. infrastructure and proposing joint work on robotics and artificial intelligence, Abe pledges to create good jobs for U.S. workers, Trump’s top priority.

Trump must be pleased to have the leader of the world’s third largest economy, a country he has criticized for years, courting his favor on a global stage. And Abe can afford to indulge Trump because, unlike Britain’s Theresa May, he is in firm political control at home. Japan offers Trump another advantage: he’d receive a warm welcome in comparison to the furious protests awaiting him during his planned state visit to the U.K. in the summer.

Yet there’s danger for Japan, because its future depends on economic dynamism, not military strength. It must not simply contain but more deeply engage with China. In the long run, good relations with Washington are crucial–but it’s China’s President whom Abe should really be courting. 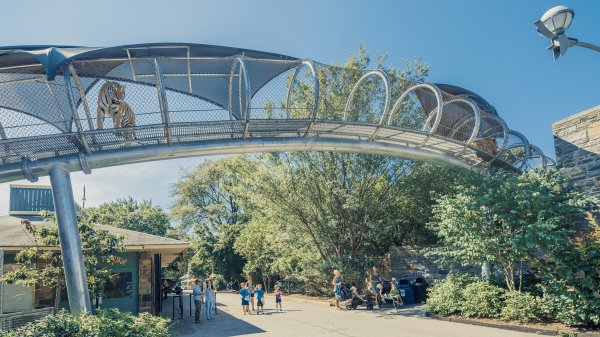 The Future of Zoos: Challenges Force Zoos to Change in Big Ways
Next Up: Editor's Pick