There is no end in sight in the legal battle between Kesha and Dr. Luke after the singer released emails allegedly from the music producer.

In a new court filing this week, the “TiK ToK” singer revealed emails she says were between Dr. Luke (né Lukasz Gottwald) and her manager Monica Cornia regarding his criticism over her diet. The filing is the latest step in her quest to break ties with him over allegations that he was mentally and sexually abusing her.

“She is working really hard,” Cornia allegedly wrote to Luke in June 2012 at 1:43 a.m. “And to get in trouble for drinking a Diet Coke and called out in front of the whole room when she’s not even there is not okay.”

Luke allegedly responded by writing that “nobody was calling anybody out,” and that a discussion was held about having discipline while on a diet.

“There have been many times we have all witnessed her breaking her diet plan,” Luke allegedly wrote back to Cornia. “This particular time it happened to be diet coke and turkey while on an all juice fast. we just wanna see her stick to the plan for her benefit and the benefit of her career.”

In a statement to PEOPLE, Luke’s lawyer, Christine Lepera, says, “Kesha and her attorneys continue to mislead by refusing to disclose the larger record of evidence showing the bad faith of Kesha Sebert and her representatives which is greatly damaging to them. It also shows the tremendous support that Dr. Luke provided Kesha regarding artistic and personal issues, including Kesha’s own concerns over her weight.”

The statement continues, “Rather than agree to a thorough disclosure, Kesha and her representatives improperly publicized, without Court permission, three out-of-context emails which do not present the full picture regarding the events they concern.”

Another alleged conflict discussed in the released emails was a disagreement over Kesha’s 2012 hit “Crazy Kids.”

In a May 2012 email allegedly between Cornia, Kesha and other managers, Cornia describes a fight between the “We R Who We R” singer and Luke over lyrics for her hit, “Crazy Kids.”

Kesha (né Kesha Sebert) was reluctant to try out the lyrics inside the recording studio, Cornia allegedly wrote, because “she doesn’t trust that [Luke] wouldn’t change his mind and turn around and use it.”

“For example, these emails do not show that the lyrics of “Crazy Kids” were, in fact, rewritten at Kesha’s request. Any claim by Kesha to the contrary is deceiving the public-just like her other meritless claims of wrongdoing by Dr. Luke. Dr. Luke looks forward to full vindication in Court.”

In late January, Kesha, 29, and Luke, 43, filed requests to amend counterclaims — and for a jury trial — in their ongoing case.

Kesha’s lawyer claims Luke didn’t pay her royalties for more than two years, that she is still owed royalties and that she hasn’t been properly compensated for “Timber,” her last Top 40 hit with Pitbull.

In October 2014, Kesha sued Luke, alleging he had drugged and raped her, as well as verbally, physically and emotionally abused her for 10 years. Luke has since adamantly denied the accusations and is countersuing for defamation and breach of contract. Last February, a New York judge denied Kesha’s request for a preliminary injunctionthat would allow her to record music outside of Luke’s purview until the lawsuit comes to a close. Two months later, the same judge dismissed Kesha’s abuse claims. And in August, the singer dropped a similar lawsuit in California to focus efforts on appealing the New York dismissals. 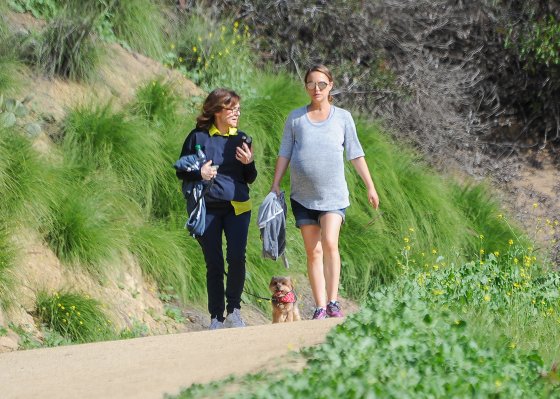 Natalie Portman Shows Off Her Growing Baby Bump While Hiking
Next Up: Editor's Pick