President of the European Commission Jean-Claude Juncker during the press conference at Mediterranean Conference Centre after the European Council Summit in Valletta, Malta, on Feb. 3, 2017.
Mateusz Wlodarczyk—Sipa USA/AP
By Charlotte McDonald-Gibson / Brussels

Speaking days before he confirmed he would not be standing for a second term in office, the former Prime Minister of Luxembourg talked to TIME about the best way to counter Russian propaganda, how the E.U. is partly to blame for the rise of populism across Europe, and President Donald Trump’s “highly unfriendly” remarks about the E.U:

TIME: President Trump has been openly critical of the E.U. and said in a recent interview that “others will leave” after Britain’s vote to quit the bloc. What was your reaction?

Juncker: I don’t think anyone else is tempted to take the same route. We were a little bit disappointed listening to President Trump’s first declaration when he was congratulating the British for having taken that decision, and more or less inviting others to do the same. That was highly unfriendly and not helpful at all.

What is the best way for Europe to respond?

Do we have to respond? If we invited Ohio to leave the United States, would they respond? I don’t think so, so we don’t have to respond to that. We have to show to the world – as far as the future of the European Union is concerned — that we are united.

The person tipped to be the next U.S. ambassador to the E.U, Ted Malloch, said you were “a very adequate mayor of some city in Luxembourg” and suggested you returned there. What do you think of Mr Malloch?

I was not a mayor, I was a prime minister, but for him that doesn’t make a difference. We are listening to what he is saying, and if he wants to be an ambassador for the U.S. in the European Union, he has to improve his knowledge and watch his words from time to time.

How are you explaining the benefits of a strong and unified E.U. to a skeptical Trump administration?

As complicated and complex and as difficult as we are, the unity of Europe is a pre-condition for a better organized world, and if the European Union would fail or decompose or other members left, the U.S. would have a more difficult role to play in the world.

How damaging would it be if the U.S. removed their sanctions on Russia now?

There is no other way than having the US and the European Union acting and moving together. That will happen. I don’t think there will be a unilateral decision of the U.S. without having consulted the Europeans.

President Trump has also said more European countries must meet the NATO goal of 2% of GDP spent on defense. Is there some common ground there?

The President is right when he asks Europeans to pay their share. That is not new and we are ready to do this. But it cannot be done overnight. If the Germans had to invest 2% of their GDP in the defense effort, this would request from the German budget €24 billion expenditure.

The British Prime Minister Theresa May has suggested the U.K. act as a bridge between the E.U. and the U.S. Would you welcome that?

To put it brutally, we don’t need the United Kingdom government to organize our relations with the U.S. and in fact according to President Obama, Britain is weaker being outside the European Union than being a member of the European Union. That is the case.

On Brexit, how confident are you that a deal can be reached on the status of Britons currently living in the E.U., and vice-versa?

Are there opportunities for the E.U. in the current global uncertainties?

The supposed stepping away by the U.S. administration when it comes to international trade relations, and the fact that the British are leaving the European Union, is opening new avenues [in trade]. We have oceans of opportunities before us. Nobody should believe that we will not use these opportunities. We will use them fiercely.

There are elections in France, Germany and The Netherlands this year, and in all three populists are making gains. Why do you think they are getting support?

I think this is largely due to our faults. I think the European Union and the Commission gave the impression that we are in command of everything. We were trying to have influence in so many things which are better in the hands of national, local and regional authorities.

Are you concerned about Russian meddling in the upcoming elections in Europe?

I’m certain that the Russians are trying by all the means they have to have a propaganda influence on European and international affairs. We have to react to this. Fake news has to be countered by real facts.

With the E.U. facing so many challenges, has it lost sight of its original aims?

We are not proud enough of what we have achieved. This was a continent of divisions, of wars, of conflicts, of divergences, differences… When I am in Asia, in Africa, people admire what we have managed to do. Europe is beautiful seen from other continents.

What are you doing to win back trust?

We are focusing on the big issues. That is the way we are trying to re-convince European citizens of the value of the European Union. [But] if traditional parties are following the populist parties, that is a major danger. If traditional parties are saying exactly the same thing, then we are lost. We have to say the contrary. The populists are spreading slogans. We have to offer solutions and answers. 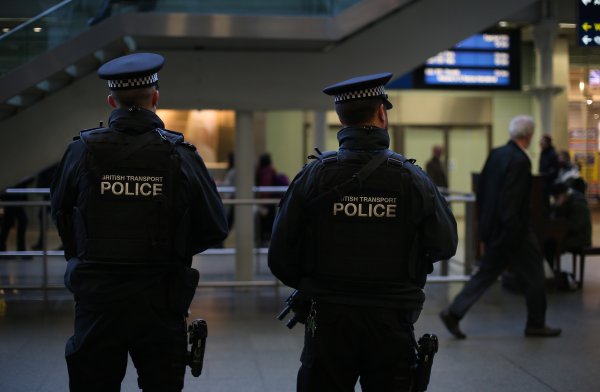 Hate Crimes Are on the Rise in the U.K. After Brexit
Next Up: Editor's Pick