A Muslim woman shows her ink-stained finger after voting in the gubernatorial election in Jakarta on Feb. 15, 2017
Achmad Ibrahim—AP
By Yenni Kwok

Jakarta voters lined up at polling booths on Wednesday to cast their votes in the Indonesian capital’s gubernatorial election, which has exposed religious and racial fault lines in the world’s most populous Muslim nation.

The vote is one of the 101 regional elections to be held simultaneously across the archipelago, but has hogged all the attention. The city’s incumbent governor is Basuki Tjahaja Purnama, an ethnic Chinese Christian. Known by his Hakka nickname Ahok, he is in court on blasphemy charges after he said, in a campaign speech, that voters were deceived by hard-line Muslims who cited a Quranic verse in support of their view that non-Muslims shouldn’t hold office.

Agus is backed by his father’s centrist Democratic Party, while Anies is backed by the right-wing Gerindra Party of Prabowo Subianto — Jokowi’s main rival in the 2014 presidential election. Gerindra aligned with conservative Islamic party PKS in the previous presidential election and has done so in the Jakarta polls. Ahok’s candidacy is supported by Jokowi’s party — the centrist and secular PDIP.

Having accusing Ahok of insulting Islam, hard-line Muslim groups, like the Islamic Defenders Front (FPI), have been organizing massive anti-Ahok protests since last October and now find themselves courted by his rivals.

Agus and Anies, who were once seen as moderate Muslim figures, have been hoping to win support from hard-liners. They attended the latest anti-Ahok protest — a prayer rally at the Istiqlal Mosque on Saturday, and even reiterated the claim that Muslims shouldn’t have non-Muslim leaders.

“It’s always intimidating how easily the mob can be provoked and how quickly things for minorities can take a turn for the worse,” Sonia Eryka, a Chinese-Indonesian style blogger who plans to vote for Ahok, tells TIME. “I think this [election] is one of the defining phases for us and this country.”

Indonesian democracy is constitutionally based on secularism, guaranteeing equal rights to all of its citizens regardless of religion as well as ethnicity. But Suratno, the chairman of Paramadina University’s Lead Institute think-tank in Jakarta, tells TIME that the Jakarta election will test “whether Islamic populism is having an effect at the polling booths.” Ahok’s victory, he says, is important for “the fight to safeguard democracy and to prevent the rise of political Islam and Islamic populism.”

Ahok has been languishing in the opinion polls for months because of the blasphemy case, but he is surging back. A survey by pollster Indikator on Friday showed he led the polls with around 39% of respondents favoring him. Anies came in second at nearly 35.4%, followed by Agus at about 19.5%. If no candidate wins more than 50% vote, there will be a second round of voting in April.

The Jakarta governor may be further helped by a scandal embroiling rival Agus’ father. Less than 24 hours before polls were set to open, the former head of Indonesia’s anticorruption agency, Antasari Azhar, held a bombshell press conference.

Antasari, who served nearly eight years of an 18-year sentence for a murder he says he didn’t commit, told journalists that former President Yudhoyono orchestrated the trumped-up charges that saw him languishing in jail until he was granted clemency by President Joko “Jokowi” Widodo last November.

“I demand SBY open his mouth. He knows my case,” Antasari said on Tuesday afternoon, referring Yudhoyono by his initials. “I want him to open up to the public on what he did and who he ordered to criminalize me.”

Antasari also claims that, weeks before his arrest, he was asked by tycoon Hary Tanoesoedibjo — a Chinese-Indonesian politician and a business partner of U.S. President Donald Trump — not to detain Agus’ father-in-law on graft charges. (In this election, Tanoesoedibjo signaled his support to Anies.)

Yudhoyono has vigorously denied the accusations. He alleges that Jokowi’s clemency was politically motivated and Antasari’s statement is an attempt to discredit him and to ruin the chances of his son Agus in the election. “The slanderous attack and character assassination are directly related with the regional election in Jakarta,” the former President said.

Results, which will begin trickling in Wednesday afternoon local time, will show whether or not he is believed. 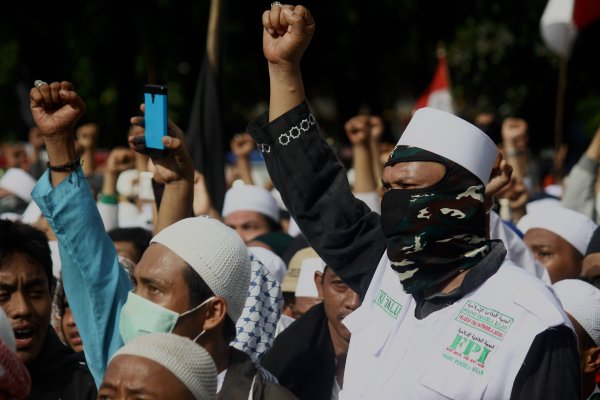 Sectarian Harmony In Indonesia's Capital Faces a Major Test
Next Up: Editor's Pick