The Actually True and Provable Facts About Non-Citizen Voting

The Trump administration continues to double down on its false and widely-criticized assertion that 3 to 5 million non-citizens illegally voted in the 2016 election.

Actually, it hasn’t. Nevertheless, President Trump announced earlier this month, despite the lack of evidence, that Vice President Mike Pence will lead a federal investigation into voter fraud.

Tons of ink has been devoted to debunking the president’s claims that our elections are marred by widespread voter fraud. But few have focused specifically on his administration’s larger false claims about non-citizens. It is important to put this particular allegation to bed once and for all.

Like voter fraud generally, non-citizen voting is incredibly rare. Simply put, we already know that ineligible non-citizens do not vote in American elections — including the 2016 election — except at negligible rates. Here are the facts.

Multiple nationwide studies have uncovered only a handful of incidents of non-citizens voting. Based on state prosecution records, votes by non-citizens account for between 0.0003 percent and 0.001 percent of all votes cast. Election officials agree that there is no serious problem of non-citizen voting in our elections. The National Association of Secretaries of State, whose Republican-majority membership includes the chief elections officers of 40 states, said they “are not aware of any evidence that supports the voter fraud claims made by President Trump.”

Federal law and the law of every state prohibit non-citizens from registering to vote or voting in elections (save for a few municipalities that allow non-citizen residents to vote in local elections). Experts believe that the severity of the penalties for violating these laws serve as a significant deterrent.

Also, it is relatively easy for a non-citizen to get caught. If an ineligible person intentionally registers or votes, not only do they risk being recognized, but their name will be on permanent lists of voters for later detection. And, as discussed below, lots of people scrutinize those lists looking for potentially ineligible voters, increasing the chances of getting caught. Again, when discovered, non-citizens face fines, time in prison, and deportation.

Perhaps because of the increased penalties non-citizens face from criminal prosecution, research also shows that non-citizens commit crimes at lower rates than persons born in the United States. Undocumented immigrants or persons with undocumented immigrants in their family are often more reluctant to engage with government officials generally, which would include registering to vote and voting.

Penalties for a non-citizen voting or registering to vote are severe.

Under federal law, any non-citizen that votes can be fined up to $100,000 and imprisoned for up to one year or three years if they intentionally misrepresented their citizenship status. States have their own equally harsh penalties. In one recent high-profile example, a permanent resident in Texas was sentenced to eight years in prison for voting.

Even more serious, a non-citizen can be deported for casting a single vote they were not eligible to cast. For non-citizens working towards naturalization, merely being registered to vote can serve as a basis for denying citizenship.

It’s not hard to identify non-citizen voting — and many people are looking.

Unlike voter impersonation fraud, which is also exceptionally rare, non-citizen voting involves ineligible persons registering and voting in their own names. If a non-citizen were to vote, their name would be permanently listed in the record of persons who voted in that election as well as on the list of registered voters in that jurisdiction for as long as they remain registered. Those lists can be reviewed or compared to lists of non-citizens to identify anyone that was ineligible to vote. List comparisons are often unreliable because the databases states rely on do not contain up-to-date citizenship status and because of common names causing false matches. These flaws, however, make it likely that investigations will overstate the number of ineligible voters rather than let some go by unnoticed.

The registration and voting records enable several different stakeholders to identify any non-citizens who voted in an election. First, state election officials are required by law to regularly scour the voter rolls for ineligible voters. Many have used the list comparison technique to comb through their entire list of registered voters, and still found minimal evidence of non-citizens voting. In 2012, Florida conducted this type of analysis of its list of 12 million registered, active voters. At first the state believed it had identified 180,000 potential ineligible voters by searching a state database with out-of-date citizenship information. Upon further investigation, the state narrowed that list down to 2,600 and sent it on to county election officials for review. After the counties conducted their own investigations, Florida removed just 85 ineligible registrants from their statewide list and only one person was convicted for fraud. Investigations in Colorado, Iowa, Michigan, and Ohio ended similarly.

Political parties and candidates, who have the keenest interest in weeding out ineligible voters who may support their opponents, also have access to and review lists of registered voters. This is particularly true in races close enough to result in recounts. In those races, lawyers for parties and candidates will scrutinize each individual absentee and provisional ballot to ensure that the voter is eligible. In this past year’s North Carolina gubernatorial election, which did not even reach the stage of a full recount, the challenging party claimed to have identified ineligible voters in half the state’s counties. Many of those votes were valid and none were cast by non-citizens. In virtually every state, political parties and candidates also station representatives as poll watchers in polling places on Election Day. In 39 states, partisans can challenge a person’s right to vote at the polls. In most of those states, challenges may be based on the voter’s eligibility, including their citizenship. In 28 states, private citizens may challenge a voter’s registration prior to Election Day.

Finally, in many polling places, poll workers and voters are likely to know the people who show up to vote and who is eligible. Most voters vote in a polling place assigned based on the town or neighborhood they live in, and an average polling place sees approximately 400 voters on Election Day. Poll workers in small jurisdictions have reported in interviews that they are confident in their knowledge of the eligible voters in their community.

The three sources President Trump has relied on for his false claim of non-citizen voting are completely unreliable.

First, the president — and his Senior Advisor Stephen Miller — cited a study by Jesse Richman and David Earnest, two professors at Old Dominion University, which claimed 14 percent of non-citizens are registered to vote. That study has been thoroughly debunked by prominent experts for relying on a sample so small that the findings could be explained by response error. The report’s own author said it does not support the president’s claim.

Next, the president cited an anecdote about a German golfer, in which the golfer became frustrated after he was turned away from voting but others were not. This story has unraveled since it first became public, with reports that the golfer is himself ineligible to vote, that President Trump heard the story third-hand, and that the voter in the story is actually a friend of the golfer’s. What is worse, the reason the voter in the story gave for his frustration was that other people in line “did not look as if they should be allowed to vote.”

President Trump also cited Gregg Phillips, an individual that first claimed in November via twitter to have evidence of ineligible voters. There is no evidence to support Mr. Phillips’ claim, but he has a history of claiming voter fraud where there is none. Mr. Phillips has refused to release the information behind this most recent allegation for fear of media “spin.”

Let’s have an honest debate about voting in this country — not one filled with misinformation. Voter fraud, including voting by non-citizens, is just not happening like the president says. 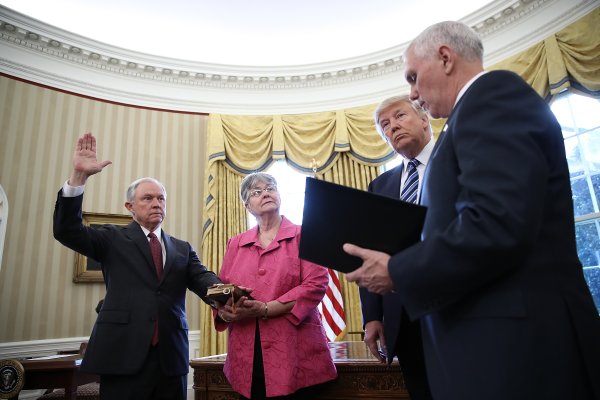 This Will Be Jeff Sessions' First Test As Attorney General
Next Up: Editor's Pick