Katy Perry took to the Grammy stage Sunday night to perform her new single “Chained to the Rhythm” live for the first time in a performance that was more stripped-down than her typical style—but still a spectacle. The pop-disco tune has given the singer a chance to make a bold political statement: she chose to wear a white pantsuit and sneakers for the performance, a subtle nod to her vocal support of Hillary Clinton and ongoing connection to political issues. The streamlined, mirrored set and monochromatic outfit marked a definite departure from her colorful, peppy performances of past years.

Some keen-eyed viewers also noted a Planned Parenthood pin on her suit jacket’s lapel, as well as an armband that spelled out “PERSIST.” She and featured singer Skip Marley closed out the song in front of a blown-up image of the text of the Constitution. “No hate,” she called out at the end.

Earlier in the evening, she labeled her next phase as an artist an era of “purposeful pop.” 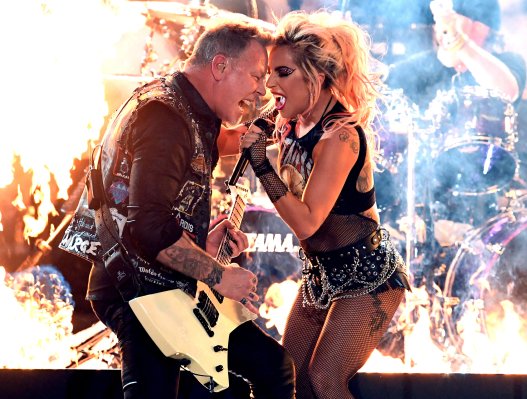 Metallica's Mic Malfunctions During 2017 Grammys Performance With Lady Gaga
Next Up: Editor's Pick