Watch Pregnant Beyoncé Mesmerize in a Regal Performance at the Grammys

A resplendent Beyoncé ascended to her throne once more at the Grammys on Sunday night, where she took to the stage to perform two songs off of Lemonade—”Sandcastles” and “Love Drought”—while very pregnant with twins.

Beyoncé’s mom Tina Knowles introduced her daughter in a touching prelude to the performance, which ultimately served as ode to motherhood. Singing in all her glowing, expectant glory, the Queen incorporated the poetry of Warsan Shire and trippy digital projections of herself and her dancers into a mesmerizing all-woman show.

“Your mother is a woman, and women like her cannot be contained,” went the poetry as Beyoncé showcased her growing belly. Decked out in a gold glittering gown and dramatic headdress, the regal star—who’s generally known for her athletic dancing—instead chose to keep it relatively sedate for the evening with “Love Drought” and “Sandcastles,” powerful downtempo songs about love, heartbreak, and healing. At the end of the songs, she thanked the audience, which had risen to its feet in a standing ovation—Blue Ivy and Jay Z included.

She’s nominated for nine awards, the most of any artist this year. 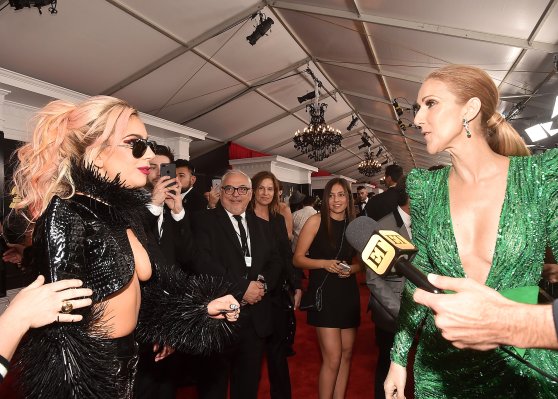