Kellyanne Conway can now join Sean Spicer among those in the Trump administration who’ve been lacerated by the newly sharp-edged SNL.

The Feb. 11 episode of Saturday Night Live continued the show’s very recent trend of meaningful engagement with a presidential administration that’s more visibly interested in the franchise than any before it. Hosted by Alec Baldwin — the show’s resident impersonator of President Donald Trump — the show took on both White House Press Secretary Spicer, played by Melissa McCarthy in a repeat of her performance the previous week, and Conway, the controversial Counselor to the President. The latter, particularly, was a brilliantly uncharitable performance that seemed designed to rattle her public image and, more significantly, her standing in the administration. It was a startling reminder of just how hard-edged SNL can be when, finally, it wants to be.

Conway was depicted in an unsubtle homage to Glenn Close’s character in Fatal Attraction, breaking into CNN host Jake Tapper’s home in order to violently plead with him to be featured on his show and create more news for herself. As a take on the character, it’s light years more developed in sophistication and edge than the show’s first gloss, whereby born provocateur Conway was actually frustrated by her freewheeling boss and trying to clean up his messes. It was also gruesome, gratuitous fun, finding giddy joy in the art of going almost too far. Conway, as played by Kate McKinnon, was untrammeled and unbound by the laws of physics; the taped bit ended with her falling out of a window and breaking several bones, only to snap herself back together like a supervillain — a twist that seems designed to bait Conway into responding. Time will tell if it was an effective troll, but it was certainly fun.

And it was, best of all, a startlingly new take on a woman who seems to defy comedy by the very outsizedness of her persona. The sketch’s idea, that Conway is obsessed with appearing on TV, lacks nuance — TV has seemed at times obsessed with having her on it, including in the case of Tapper’s marathon session last week — but is nuance the point, here? There was a vividness to this Conway that fixed itself in the mind in the way many recent SNL impersonations hadn’t been able to do. It was a spiritual sibling to McCarthy’s Spicer — an imitation intended to wound that did so by depicting the subject as desperate and unhinged. Baldwin’s Trump, shown later in the episode in a People’s Court-themed sketch, is coolly assured of his own brilliance; everyone around him, in the show’s telling, are doing the sort of scrambling that makes for memorable comedy.

And that the show is memorable, helping perhaps to define the personas of the people it takes on, is an argument for the relevance of a show that had seemed to have lost its purpose immediately pre- and post-election last year. The president’s seeming focus on the show has given each episode an urgency and heat that goes beyond merely being “live”; another bit, in which comedian Leslie Jones donned male drag to play him, felt among other things like yet another poke in his eye. (This scrappiness is welcome, given that the show’s format, rigidly predictable, is at once a tie to a more staid reality than the one we’re living in and, as the Baldwin episode demonstrated, a generator of plenty of slack.) Indeed, McCarthy’s sketch, depicting Spicer as conducting a crazed and violent war on the press, while as technically good as it had been the first time around, lost something upon repetition, in part because Spicer seemed to have been toned-down and sidelined a bit in the week between the two sketches. Saturday Night Live will need to keep finding targets to portray as the real ones react; one doubts, though, that they’ll have much trouble with that. 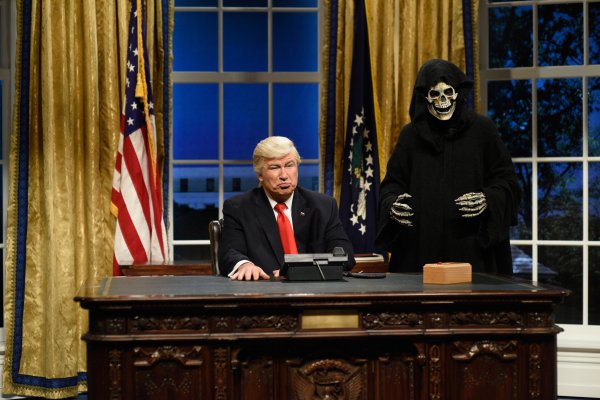