As the legal battle over President Trump’s travel ban continues its way through the nation’s courts, commentators have begun to speculate about the chances that the case will reach the Supreme Court.

That outcome is certainly a possibility. Both sides have, in various ways, claimed that fundamental constitutional rights are at stake. The Trump Administration has argued that the Constitution provides the Executive with sufficient authority to determine who may and may not be allowed into the country. Such arguments have been reinforced with a healthy dose of national security references. Opponents of the travel ban have argued that it violates numerous constitutional rights, among them the 5th and 14th Amendments right of due process and equal protection. When claims are made of such a direct clash between constitutional rights, the chance of a case being appealed to the Supreme Court increases. When national security is involved, the likelihood increases further still.

Forty-six years ago the Court faced a situation in which the Executive branch also claimed that national security and executive privilege superseded other constitutional provisions. In June 1971, the New York Times began publishing extracts of a secret government report relating to American involvement in Vietnam. The 47-volume report had been leaked to the Times by Daniel Ellsberg, a RAND corporation analyst who believed the material contained within the report showed the government was lying about the reason the United States became involved in Vietnam. He believed that the public had the right to know the truth. Within days the Administration sought and received a restraining order against the Times, preventing further publication of the report, which came to known as the Pentagon Papers. The Times claimed the protection of the First Amendment right to freedom of the press. Eventually, twelve days after publication of the first article, the case made its way to the Supreme Court.

As anyone who has studied the history of the Vietnam War is aware, the government lost in a vote of 6 to 3.

Although the issue argued in New York Times v. United States was, on the surface, about whether the Nixon Administration’s efforts to prevent publication of the Pentagon Papers violated the First Amendment, and the current issue is the extent of the authority of the President to limit foreigners’ entry to the United States, the question of the extent to which national security provides a defense for executive action means there are remarkable similarities between the debate about the Pentagon Papers and the current debate about the travel ban.

The Trump Administration would undoubtedly agree with Justice John Marshall Harlan II’s comment in dissent that “the scope of the judicial function in passing upon the activities of the Executive Branch of Government in the field of foreign affairs is very narrowly restricted.” The courts might reasonably demand that the judgment regarding national security be made by the appropriate government officer, Harlan argued for the three dissenters, but because such decisions are political not legal, it is not the province of the Court to judge whether there is an actual threat to national security. That decision lies with the government. Such a view echoes Trump’s position: on February 4 he tweeted: “The opinion of this so-called judge, which essentially takes law-enforcement away from our country, is ridiculous and will be overturned!”

Likewise, the admonition of the Times by Justice Harry Blackmun, himself a Nixon appointee, has uncanny echoes of Trump’s recent tweets attacking Judge James Robart, the Washington State judge who issued the order putting a temporary halt to the ban. Blackmun wrote: “I hope that damage has not already been done. If, however, damage has been done … then the Nation’s people will know where the responsibility for these sad consequences rests.” Trump’s response: “Just cannot believe a judge would put our country in such peril. If something happens blame him and court system.”

Opponents of the travel ban can also find support for their positions in the various opinions of the six justices who constituted the majority. Although the justices could not agree on a single rationale in support of allowing the publication to continue, several comments are relevant to the current debate. Justices William Brennan, Potter Stewart, and Byron White all noted that, while the Executive might in some circumstances legitimately prevent publication of the Papers, in this instance the Administration had failed to prove that such action would actually harm national security. Applied to the travel ban, opponents have forcefully argued that there is no concrete evidence that banning travelers from the seven named countries will prevent terrorist activity, a view Judge Robart hinted at in his February 3 hearing.

Likewise, Justice White, hardly a liberal on the Court, argued, “To sustain the Government in these cases would start the courts down a long and hazardous road that I am not willing to travel, at least without congressional guidance and direction.” White’s argument was that the implications of the restraint on publication had such “sweeping potential” that claims of national security and executive authority were simply insufficient to justify the action. Once again, opponents’ claims that the executive order was arbitrary and unjustified finds support in the earlier case.

None of this suggests, of course, that the case will actually make it to the Supreme Court, nor that the Court will necessarily agree to resolve the dispute if it is appealed to them, nor does it indicate how the Court would rule in the case should it get that far. But it does show that the battle between executive authority, national security, and key constitutional provisions is an ongoing debate, and, contrary to the President’s claim, the Court does have an important role to play.

Emma Long, Lecturer in American Studies at the University of East Anglia, is Associate Editor of History: The Journal of the Historical Association. 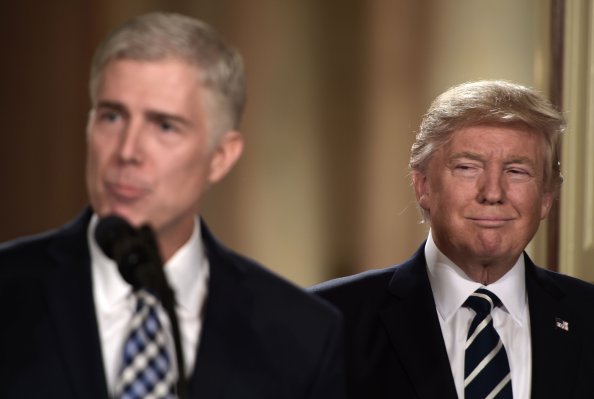 The Tricky Politics of the President and the Judge
Next Up: Editor's Pick