A federal appeals court dealt a blow to President Trump Thursday when it declined to lift a nationwide suspension on his travel ban.

But what exactly does that mean, and what happens now? Here’s what you need to know about the court’s decision and where Trump can go from here.

What did the court rule?

In a 3-0 decision, the Ninth Circuit, based in San Francisco, kept in place a restraining order put on Trump’s travel ban by a judge in Washington state. In other words, travelers who had been stopped by Trump’s executive order, which suspended the U.S. refugee program and banned citizens of seven Muslim-majority countries, can continue entering the country.

“We hold that the Government has not shown a likelihood of success on the merits of its appeal,” the decision said, “nor has it shown that failure to enter a stay would cause irreparable injury, and we therefore deny its emergency motion for a stay.”

The judges wrote that the executive order could violate the Fifth Amendment’s due process clause by denying lawful permanent residents entry to the country or barring refugees seeking asylum.

“The public has a powerful interest in national security and in the ability of an elected president to enact policies,” the judges wrote. “The public also has an interest in free flow of travel, in avoiding separation of families, and in freedom from discrimination.”

In the wake of the decision, Trump tweeted “SEE YOU IN COURT,” and the Justice Department said it was “considering its options.” Trump then elaborated to reporters, saying, “It’s a political decision, we’re going to see them in court, and I look forward to doing that. It’s a decision that we’ll win, in my opinion, very easily.”

If Trump wants to go back to court, he has a few options.

When will this all take place?

The timing differs depending on which recourse the Trump Administration decides to take. It could take a while for the case to wind up to the Supreme Court on the merits (the final of phase outlined above)— there’s a good chance Trump’s nominee Neil Gorsuch would actually be on the Court by then to hear the case. An en banc appeal on the Ninth Circuit would move faster. The Administration has just 14 days to request that appeal. And waiting for the wheels to roll on the next round of Robart’s decisions could come soonest of all; both sides have to file their motions for a preliminary injunction hearing by Feb. 17. 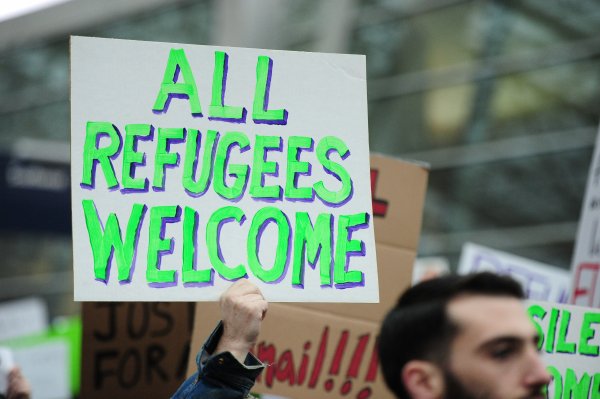 This Is How Private Citizens Could Help Refugees Come to the U.S.
Next Up: Editor's Pick