The 5 Candidates in the Battle Royale for French President

Every four years, plenty of Americans wish they were given more than two serious options for president. The French, however, are comparatively spoiled for choice with five candidates in this year’s ballot.

This diverse array of contenders will all but certainly be winnowed down to a head-to-head by France’s two-round voting system. Unless one candidate wins a (highly unlikely) majority in the first round, the two candidates who receive the most votes in round one (April 23, 2017) will face off in a second round (May 7, 2017).

Here are the 5 people vying for the French presidency in 2017.

Marine Le Pen
Any conversation about the French presidential race must begin with the Front National’s Marine Le Pen, because she’s the only candidate who consistently makes the second round in polls. She leads the current pack with about 25 percent of the vote in the first round. The far-right firebrand, who has dubbed herself “Madame Frexit,” speaks loudly and often about withdrawing France from the E.U. and Eurozone. While the French president doesn’t have power to unilaterally pull France out of the EU, she can use her (likely limited) influence in parliament and campaign aggressively for a public Brexit-style vote. And while an IFOP poll from July showed that nearly 70 percent of French people support EU membership, if 2016 taught us anything, it’s never take referendum outcomes for granted.

Le Pen has managed to repackage the virulent xenophobia and nationalism of her father (and Front National founder) Jean-Marie Le Pen to fit the times; she rails against Muslims rather than Jews. Instead of being anti-immigrant, she talks about “intelligent protectionism” and “economic patriotism.” That has understandable appeal for the 33 percent of French citizens who see globalization as a threat and the 53 percent who view refugees as a social burden.

Emmanuel Macron
The former investment banker represents a dying breed in European politics: centrist, technocratic and pro-European. The 39-year-old served as economy minister for current president François Hollande (who is so unpopular that his approval rating was hovering at 4 percent just months ago), but Macron has always had an independent streak that led him to launch his own political party, En Marche! (‘On the Move!’) about a year ago. Traditional socialists eye him suspiciously, given his economic liberalism and commitment to market reforms; his social progressiveness irks the conservative Republicains. He is an avowed supporter of the EU, the UN, NATO and German Chancellor Angela Merkel’s policies on refugees—in other words, he’s the globalist candidate at a moment when that idea has fallen far out of fashion.

Nevertheless Macron is holding his own. His political fortunes were boosted this week with the growing scandal engulfing Francois Fillon (more below). Although Macron trails Le Pen 25 to 22 in first round polls, those same surveys show him beating the FN candidate with two-thirds of the vote in the runoff. For now, he looks like France’s preferred Le Pen alternative. That might be enough to win.

Benôit Hamon
Hollande’s center-left successor won the Socialist Party primary only a couple of weeks ago. The former education minister represents the left-wing flank of his party; he supports reducing the French work week to 32 hours from its current 35, as well as a universal basic income of €750 ($800) a month for all citizens over 18. That plan would cost France €480 billion a year, or just over a fifth of its annual GDP.

As a result, Hamon has gotten creative with his tax proposals, including by proposing to legalize and tax marijuana. He has also proposed a robot tax that forces companies that use automation to replace human workers to pay a higher tax rate. If these proposals seem a bit “out there” to you, they do to plenty in France too; Hamon is running fourth at 15 percent in polls. But floating them now means they might seem less radical when he sets himself up for a 2022 run.

Jean-Luc Melenchon
The far-left candidate, who quit the Socialist Party in 2008, has managed to unify several longstanding Marxist far-left movements behind him. His presidential platform is defined in large part by his anti-austerity stance and his views on globalization (he’s not a fan), meaning that he has much more in common with Le Pen on this particular score. He talks constantly about fiscal justice and has wholeheartedly embraced technology—the 65-year-old announced his presidential run in Lyon and Paris simultaneously via hologram. He argues for the end of nuclear power in France and wants to embrace a “new ecological order.”

Melenchon is currently polling around 10 percent, which means he’s currently on the outside looking in. There’s been rumors about a possible uniting of forces with Hamon to give the French people a serious leftist option; together, Hamon and Melenchon would net 25 percent adding the latest polls together. Of course, that would mean one of the candidates putting aside his own ambitions, a long-shot given the years of party rivalry and political egos.

François Fillon
Finally there’s the center-right candidate of Les Republicains, the former prime minister under Nikolas Sarkozy, and the presumed front-runner—until about two weeks ago. That’s when news broke that Fillon hired his wife as his parliamentary aide and put her on the public payroll. Which is not against French law… but to date there is no evidence that she actually worked to receive that €830,000 paid out over 15 years.

That’s a bad break for Fillon who was gaining traction until the scandal erupted. Despite denying wrongdoing, he’s now at 20 percent and sinking fast. As the center-right candidate, he vowed to streamline the bloated French public sector by a half million jobs, abolish the long-standing 35 hour French work week, extend the retirement age and scrap the wealth tax. And while he’s pro-EU and has been critical of Brexit—unlike Le Pen—he has been antagonistic toward Muslims and openly wistful for a historically white and Catholic France.

Also like Le Pen, he wants to partner with Russia to crush ISIS and Islamic terrorism more broadly. His Republicains supporters thought he was the ideal candidate to take on a surging Le Pen—right-wing enough to steal votes from her, but mainstream enough for non-Le Pen voters to accept in a second round run-off. But it’s no longer clear that he can survive even to the first round.

Who’s going to win? All signs point to Le Pen winning the first round, but after then all bets are off. Current polls suggest either Macron or Fillon could beat her in a runoff. But all it takes is another terrorist attack, another political scandal, or another European crisis for another surge of uncertainty. Watch this space. 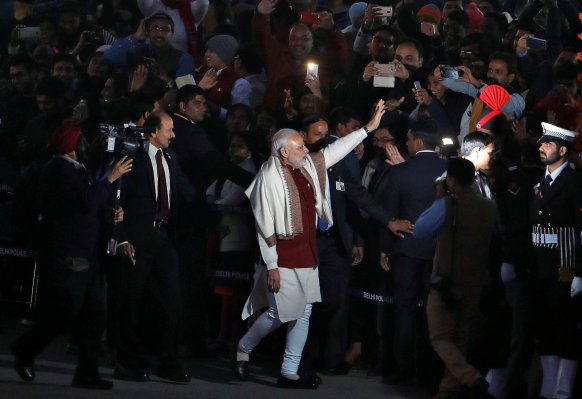 These 5 Votes Could Help Shape the World in 2017
Next Up: Editor's Pick