U.S. President Donald Trump has assured Chinese President Xi Jinping in a phone call that he will uphold the “one China” policy, according to a White House statement on Thursday evening, in a move likely to ease diplomatic friction between the world’s two largest economies.

According to the statement, Trump used the first direct contact with his Chinese counterpart to say the U.S. will abide by the 1992 Consensus agreed by Beijing and Taipei that declares Taiwan and China to be part of the same nation, even if both sides disagree as to that nation’s sovereign power.

The consensus has been the bedrock of warming relations between these old adversaries, which effectively split in 1949, when routed Nationalists fled across the Taiwan Strait following the communist victory in China’s civil war. Since then, Taiwan has become a self-ruled island, but Beijing continues to regard it as a renegade province, to be retaken by force is necessary.

Women walk past a newsstand displaying a Chinese news magazine fronting a photo of Chinese President Xi Jinping and that of U.S. President Donald Trump in Beijing on Feb. 9, 2017
Andy Wong—AP

Trump’s acceptance of a phone call in December from Taiwan President Tsai Ing-wen — breaking almost four decades of no direct contact between U.S. and Taiwanese leaders — threatened to send Sino-U.S. relations into a tailspin. So did his repeated statements that U.S. recognition of “one China” was “up for negotiation.”

The breakdown in relations that such a stance would have inevitably caused appear to have been averted by Thursday evening’s phone call — even if Trump had chosen to speak to 18 different world leaders before picking up the phone with Xi.

In response to the call, the Chinese President said his nation would “work with the United States to enhance communication and cooperation so that bilateral ties can advance in a sound and stable manner and yield more fruits to benefit the two peoples and people of all countries in the world,” according to the Chinese Communist Party mouthpiece Global Times newspaper.

The call came after Trump neglected to send a goodwill message to China on the first day of the Lunar New Year holiday, as has been the norm for recent U.S. Presidents. However, on Wednesday Trump did send Xi a letter that wished “the Chinese people a happy Lantern Festival and prosperous Year of the Rooster,” and expressed his desire “to develop a constructive relationship that benefits both the United States and China.”

Professor Wang Yiwei, director of the Institute of International Affairs at Beijing’s Renmin University, says Trump’s letter and phone call mean Sino-U.S. cooperation is moving forward after a difficult start. “That is very important as both China and the U.S face so many challenges, and many are similar, like commerce, and we should be working on those together,” he tells TIME.

Still, many other issues of friction exist between the superpowers, including Beijing’s aggrandizement in the disputed waters of the South China Sea, how to rein in rogue state North Korea and combating climate change. Trump also pledged to label China a currency manipulator during his presidential campaign and to impose 45% tariffs on Chinese exports, threatening to spark a trade war.

Trump’s trade team is stacked with China hawks, and his defense chief James Mattis said earlier this week that the U.S. would come to Japan’s aid in the event of a military confrontation over the Diaoyu/Senkaku Islands, which are also claimed by Beijing. On Tuesday, a report by a panel of top China experts warned that this “key bilateral relationship stands at a precarious crossroads.”

It remains to be seen whether Thursday’s call has permanently lowered the temperature of bilateral relations. The White House statement described the conversation as “extremely cordial” and said that the two leaders “extended invitations to meet in their respective countries.”

That would be the next stage of rapprochement, and it is likely no accident that the Xi-Trump call came on the eve of Japanese Prime Minister Shinzo Abe’s visit to the White House. Abe is expected to dine with the U.S. President four times and fly on Air Force One to Trump’s resort in Florida, where the two leaders will enjoy a weekend of golf. Such extravagant courting of China’s historic rival while relations with Beijing were on ice would have further infuriated the Chinese leadership.

That leadership is treating Thursday’s phone call with the utmost delicacy. Reader comments on state news reports of the conversation were suspended at the time of publication, presumably as officials attempt to head off any negative reaction. Trump’s open baiting of China had not gone down well with the jingoistic Chinese public.

“Trump finally confirmed the ‘one China’ policy, he has finally woken up,” posted one user on China’s Twitter-like microblog Weibo on Friday. “He is a businessman who lacks a politician’s qualities, but as a businessman he is still cunning. China must always stay alert.”

—With reporting by Yang Siqi / Sanya 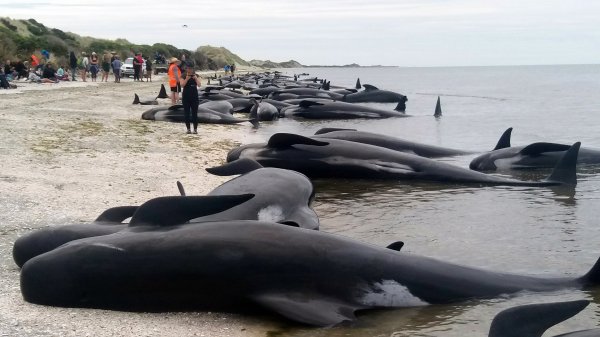 Over 400 Pilot Whales Stranded in New Zealand
Next Up: Editor's Pick