This Is How Private Citizens Could Help Refugees Come to the U.S.

The immediate reaction to President Trump’s Executive Order on “Protecting the Nation from Foreign Terrorist Entry into the United States” has focused on the ban on visas to citizens of seven Muslim countries. Far less attention has been given to its drastic impact on the U.S. refugee program.

The President has ordered an immediate halt to all refugee admissions, pending a 120 day review of security measures necessary to prevent the entry of terrorists. He has explicitly barred the entry of Syrian refugees until such time that he determines that resettling them here is “in the national interest.” And he has cut refugee admissions for the 2017 fiscal year, set by President Obama at 110,000, to 50,000.

The mandated review of security measures for admitting refugees is unnecessary, and President Trump must know it. The vetting measures already in place are the strictest for any group of persons seeking entry to the U.S.

The singling out of Syrian refugees is particularly troubling. There are no refugees in the world more needy of resettlement to a country where they can begin to rebuild their lives. Last year, 13,000 Syrian refugees entered the United States after undergoing rigorous screening. Not one has participated in an act of terrorism here.

Most remarkably, the Administration has provided no reason for cutting planned refugee admissions by more than 50% for the current year. This will mean that 60,000 fewer refugees will be welcomed to the United States—refugees not just from Syria, Iraq, and Iran, but also those who have fled violence in Sudan, the Democratic Republic of Congo, Burma, Eritrea, the Central African Republic, Colombia, and Pakistan. This cut will be in place even after a determination by the Administration that secure screening procedures are in place.

The reduction in U.S. commitment could not come at a worse time. The number of persons displaced by violence and conflict are at levels not seen since the end of World War II. The United Nations refugee agency has determined that 1.19 million refugees worldwide are in need of resettlement. Trump’s cut is not likely to be made up for by other countries; it will simply mean that tens of thousands of refugees who would have been brought to the United States will continue to live in limbo.

There are two responses that should be considered. First, Congress should assert its prerogatives. Under U.S. immigration law, the President is required to “provide for periodic discussions” with Congress regarding “the possible need for adjustments in the allocation of admissions among refugees.” This was not done before the announced cut, and Congress should now insist on such consultations to seek a plausible explanation from the Administration for the reduction.

Second, if the President is unwilling to return admissions to the previous level, Americans should press for a program that would allow for private sponsorship of refugees.

A program of private sponsorship would work this way: Refugees could be referred by UNHCR and cleared by the State Department (after the appropriate security screening). Private citizens and groups would volunteer to sponsor the approved refugees, paying all costs associated with their admission for a year and helping them adjust to life in America. This would increase the number of refugees admitted at no additional cost to the U.S. taxpayers, and give Americans who cherish this country’s tradition of welcoming refugees a direct way to show their commitment.

Canada has permitted private sponsorship for almost 40 years, and during that time nearly 300,000 refugees have benefitted. The Canadian government has also helped launch a global initiative to assist other countries interested in adopting similar programs.

Private sponsorship would not require new legislation from Congress. It could be put in place by the Department of State, provided the White House increases the number of refugees who can be brought to the U.S. Public support for the proposal must be directed at persuading the President to restore refugee numbers to their previous level.

It is a virtual certainty that the generosity of Americans would more than compensate for the unexplained and unjustifiable cut in the refugee program imposed by Trump.

Aleinikoff is Director of the Zolberg Institute for Migration and Mobility, The New School, and Senior Associate, The Migration Policy Institute. From 2010-15, UN Deputy High Commissioner for Refugees. 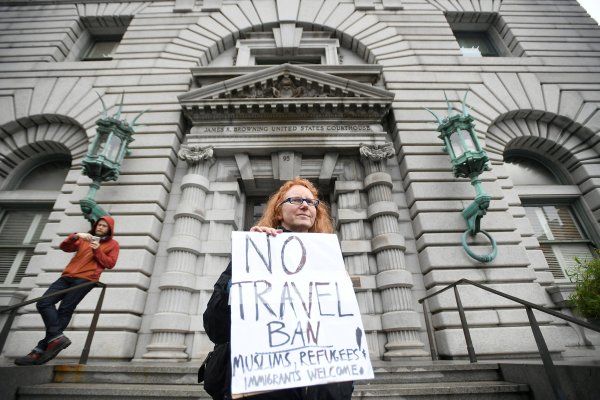 Court Rules Against Trump on Travel Ban
Next Up: Editor's Pick