Fashion’s always functioned as a reflection of the world at large and this winter’s New York Fashion Week is no exception.

From editors to designers, the fashion flock is using their platform this season to talk about the issues that are important to them. For some, like Vogue editor-in-chief Anna Wintour, it’s standing up for reproductive rights access by sporting a pin that declares support for Planned Parenthood. For others, like the models in Tommy Hilfiger’s Venice Beach show, it’s wearing a white bandana to show solidarity and a commitment to inclusivity. And if two’s a trend, then we’re calling it now: bold statement tees with even bolder political messages are this season’s logomania with a conscience — the runways are teeming with them.

Fashion as activism might seem to be en vogue right now in the wake of an overtly political year, it’s worth remembering that some designers have always created clothes with a statement. One only needs to look as far as Pyer Moss’ Kerby Jean-Raymond, whose collections have examined Black Lives Matter.

With that in mind, here’s a look at some of the political statements made so far at NYFW.

Indonesian designer Anniesa Hasibuan made history last year by becoming the first designer to have a NYFW collection with hijabs; for this collection, she cast her show using all immigrants and second-generation children of immigrants, according to ELLE.

Designer Prabal Gurung sent his models down for their final runway walk in feminist slogan tees.

Tome drew deep inspiration from feminist art activists the Guerilla Girls, going so far as to emblazon one of the group’s poster’s on the back of a jacket.

Milly designer Michelle Smith named her collection, “Fractured,” saying that the inspiration came when from post-election feelings of “defeat.”

Project Runway alum and designer Christian Siriano debuted a “People are People” shirt that emphasized human rights; the proceeds from the sales go to the ACLU.

Statement-making shirts might be the new logomania for the fashion world; at least, that’s the conclusion we came to after seeing brand Creatures of Comfort’s tees, and half the proceeds will go to the National Immigration Law Center.

Designer Adam Lippes declared his allegiance to Planned Parenthood with a sign for his show.

Vogue editor-in-chief Anna Wintour wore an “Fashion Stands With Planned Parenthood” pin while sitting front row at Brock Collection on the first day of NYFW. The pin is the result of an initiative by the Council of Fashion Designers of America and Planned Parenthood, led by designer Tracy Reese, to raise awareness about the importance of the organization’s work.

Designer Thakoon Panichgul and his team sported white bandanas, an initiative started by Business of Fashion to promote “human unity and inclusiveness amidst growing uncertainty and a dangerous narrative peddling division.”

The models at Tommy Hilfiger’s Venice Beach show — featuring a collection made in collaboration with model Gigi Hadid — all sported white bandanas on their wrists. Gigi Hadid recently marched in New York to protest President Donald Trump’s executive order on immigration. In November, Hilfiger told WWD that any designer “should be proud to dress” Melania Trump. 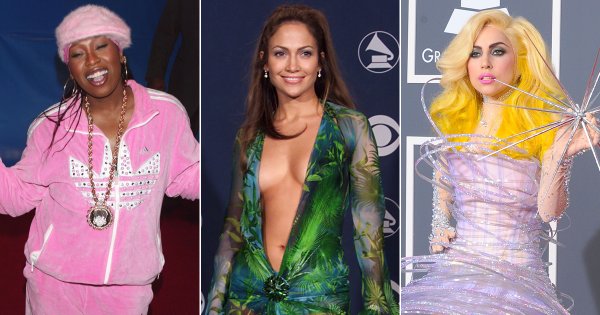 The 25 Most Memorable Grammy Looks of All Time
Next Up: Editor's Pick