The world, Donald Trump wants you to know, is “a horrible mess.”

Radical Islamic terrorists are gathering strength. Christians are being executed en masse in the Middle East. Illegal immigrants lurk in the shadows. Gangs operate with impunity in our cities. The U.S. murder rate, the President falsely claims, “is the highest it’s been in 47 years.” Drugs are “pouring” across the border. “Bad people (with bad intentions)” are flooding through our airports.

Fear has always been an effective form of political rhetoric, and one deployed to great effect by countless presidents. As George W. Bush rallied support for the war on terrorism, his Administration introduced a color-coded threat matrix that never dropped below yellow. To push his crime bill, Bill Clinton warned that without a crackdown on violent juveniles, “our country is going to be living with chaos.”

“People react to fear, not love,” explained Richard Nixon, a scaremongering maestro whose cries for “law-and-order” were a coded message to white citizens worried about black crime. “They don’t teach that in Sunday school. But it’s true.”

And no President has weaponized fear quite like Trump. He is an expert at playing to the public’s phobias. The America rendered in his speeches and tweets is a dystopian hellscape. He shapes public opinion by emphasizing dangers—both real and imaginary—that his policies purport to fix.

“He is a master at it to a degree that I haven’t seen,” says Barry Glassner, a sociologist at Lewis & Clark College and the author of The Culture of Fear. “His formula is very clean and uncomplicated: Be very, very afraid. And I am the cure.”

Fear has been a fixture of Trump’s oratory since the start of his campaign, which began with an attack on Mexican immigrants. On the trail he sometimes called to the stage the bereaved parents of children who were killed by people in the U.S. illegally. His inaugural address was a dark rumination on “American carnage”: the factories “scattered like tombstones,” the “crime and gangs and drugs that have stolen too many lives.” In his speech at the Republican nomination convention, Trump described the U.S. in a “moment of crisis,” then he cast himself as its savior: “I alone can fix it.”

He has carried this approach into the White House. Trump’s daily tweets and remarks enumerate the daunting array of dangers facing ordinary citizens, from terrorists posing as refugees to the crime rate in inner cities. In many cases, Trump exaggerates the threat. The murder rate is actually down sharply from peak levels a generation ago. No refugee admitted to the U.S. has killed anyone in a terrorist attack since intense screening measures were imposed in 1980.

In some ways, Trump’s dark language have been matched by the left. In the early weeks of his Administration, some critics have sounded apocalyptic warnings about his presidency, with scholars and activists alike making comparisons to Adolf Hitler’s genocidal Nazi regime.

Even Presidents who sometimes wielded fear as a weapon tended to encourage the public to face threats with resolve. Trump is different. His approach is to seed fear, not assuage it. “Believe me. I’ve learned a lot in the last two weeks,” he told a gathering of police chiefs on Wednesday, “and terrorism is a far greater threat than the people of our country understand.”

Such remarks are part of a deliberate effort by the White House to demonstrate its vigilance in the face of danger. “I think what we need to do is to remind people that the Earth is a very dangerous place these days,” White House spokesman Sean Spicer explained Tuesday. “That ISIS is trying to do us harm. And that the president’s commitment is to keep the country safe.”

That’s one reason why, despite the controversy they have generated, Trump’s executive orders have so far proven broadly popular. A Morning Consult/Politico poll found that 55 percent of American voters support the order to temporarily suspend the U.S. refugee program and bar citizens from seven majority Muslim nations from entering the country.

“The American people are afraid,” says a senior Administration official. “That’s what the President’s reflecting.”

Trump’s approach is particularly jarring because of the contrast with his predecessor. Unlike past Democrats and Republicans, President Obama largely shied away from using fear as a political weapon, Glassner says. Critics often excoriated him for his sanguine comments about the state of the war on terrorism. But hope, not fear, was Obama’s political metier.

Trump has a different approach, one that benefits from the echo chamber of social media. “He’s created an entire climate” of fear, Glassner says, “through this constant social media work that then creates a feedback loop. He tweets. The media writes about it. Cable TV has a panel that takes it seriously.” When he pumps alarm into the system, it lingers.

Trump’s approach is more the rule than the exception. “The whole aim of practical politics,” H.L. Mencken wrote almost a century ago,” is to keep the populace alarmed (and hence clamorous to be led to safety) by menacing it with an endless series of hobgoblins, all of them imaginary.”

Never has that adage been truer than now. 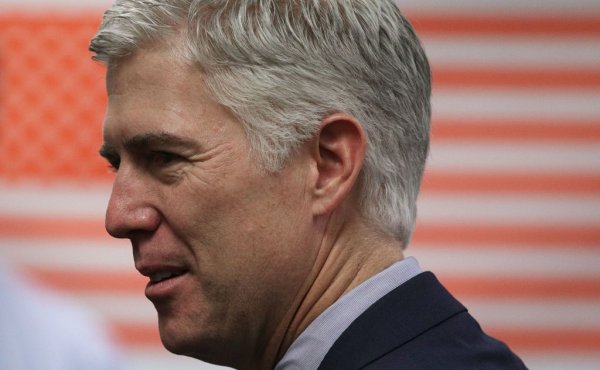 Gorsuch 'Disheartened' By Trump's Tweet on Judge
Next Up: Editor's Pick