A Syrian Family Waits to Learn Their Fate

Taimaa Abazli, her two children and her husband (not pictured) take an overnight bus to Athens, where they will learn which country will grant them asylum.
Lynsey Addario for TIME
By Aryn Baker/Athens

There is no call more important to the Syrian refugee stranded in Greece than the one from the Greek Asylum Service informing her that finally, after months of agonized waiting, there is a European nation willing to take her in. The polite man on the other end of the line won’t name the country; instead, he instructs the refugee to take a chartered bus to Athens for an in-person interview–these usually take place within the next 24 hours. “It is a destiny-defining moment,” says one refugee, who put off buying diapers for his newborn daughter in order to save up for a battery charger for his phone. “You can’t afford to miss that call. You bring your phone with you everywhere you go. You never let it die.”

Taimaa Abazli, a 24-year-old mother of two, missed that call. She had a good reason: her 4-month-old daughter Heln had just been diagnosed with an acute bronchial infection, and in the frenzied rush to the hospital she left her phone at the hotel where she and other refugees had been staying. By the time she and her husband Mohannad realized their mistake, it was too late to call the asylum office back. The appointment was scheduled without their being able to explain that the hospital wanted to keep Heln on an IV drip for three days, or that taking the infant on a 10-hour bus ride to Athens might put her at greater risk of developing pneumonia.

To Taimaa, nothing was more important than her daughter’s health. Mohannad worried that if they missed the interview, the family’s entire future would be at stake. The couple argued well into the evening, and Mohannad prevailed. Against doctor’s orders, Taimaa checked her daughter out of the hospital, and she and her family boarded the overnight bus to Athens, with Heln bundled up against the cold, still struggling to breathe.

Under any other circumstance, Taimaa says, she would be excited to take a journey that promised to reveal, after months of waiting, the first solid glimpse of her future as a legal resident of Europe. She fled Syria with her husband and a young son a year ago, when the borders between Greece and northern Europe were still open. But by the time they reached Greece, after a harrowing journey by land and sea, mainland Europe’s attitudes toward the refugees streaming in from Middle Eastern battlefields had hardened. Last March the borders slammed shut, trapping some 60,000 asylum seekers in a country already on the verge of economic collapse.

The European Union, recognizing Greece’s burden, pledged in 2015 to take up to 66,400 of its refugees within the next two years. But the rise of far-right and nationalist parties throughout Europe has substantially slowed those efforts, keeping the asylum seekers in limbo. Some countries, such as Austria, Denmark and Poland, are refusing to take in refugees altogether, while countries like Slovakia and the Czech Republic have accepted fewer than a dozen each. So far, little more than 12% of Greece’s asylum seekers have been relocated elsewhere in Europe. U.S. President Donald Trump’s recent refusal to accept Syrian refugees for resettlement in the U.S. may further embolden Europe’s anti-migrant sentiment, prolonging the pain for families who want nothing more than to get started on their new lives. “When it comes to accepting refugees, European countries are still far behind schedule,” says Roland Schönbauer, the U.N. refugee agency spokesman in Athens. “It’s not a big task to accommodate 50,000 people in the richest region of the world. These people are not going back. Where will they go?”

Like the tens of thousands of other refugees in Greece, Taimaa–one of three new mothers whom TIME is following for its yearlong Finding Home project–has spent the past 12 months in a constant state of uncertainty. She doesn’t know where her family will go or what their future holds. In Syria she was a music teacher; now she dreams of opening a beauty salon, but it’s hard to make plans when she doesn’t even know what language her customers will use.

The Greek Asylum Service says it tries to match applicants’ preferences, language abilities and family ties with recipient countries, but refugees say the process is more like a lottery. Taimaa and Mohannad spent much of their bus journey to Athens debating the relative merits of Germany and Holland. Taimaa had hoped for Germany, but friends who had been relocated there told her the conditions for arrivals were little better than in Greece. The couple also fears that Germany’s historically pro-refugee Chancellor, Angela Merkel, will not be re-elected in September, further threatening a tenuous acceptance in the country. Ireland, says Taimaa, would be far better. At least she already speaks some English.

The bus pulled up to the asylum office at dawn, disgorging several dozen refugees into the frigid morning air. They huddled around their suitcases, stamping their feet and blowing on their hands to keep warm until the office opened two hours later. Taimaa and her family were among the first in line.

They emerged several hours later. “What did you get? Is it good?” one of the other refugees shouted out. Mohannad didn’t say anything at first. He put his thumb up, then rotated it sideways, then down, and back to sideways. “Estonia,” he whispered, bewildered. “I don’t even know where it is on the map.”

“Est-WAN-ya?” Taimaa rolled the unfamiliar word around in her mouth. Her husband corrected her pronunciation. “Estonia?” she said again. “That’s the first time I’ve even heard of it.” For the little that Syrian refugees know about the small Baltic nation, Estonians likely know even less about them. The country, which has the smallest Muslim population in Europe, has taken in only 89 refugees under the European migrant-relocation program–significantly fewer than the 550 it has pledged to take in by the end of 2017. It has no mosques, and prospective asylum seekers are expected to adhere to Estonian values, no matter their own religious and cultural traditions.

Within a few hours of getting the news, Taimaa had already consulted her far-flung network of fellow refugees for information about Estonia. The reviews were mixed. The country was praised for helping the newcomers integrate by assisting them in finding affordable housing, schooling and jobs. But the language was difficult to pick up, the people could be cold, and it was hard to build a community, let alone find a Middle Eastern grocery store. Estonians like to eat pork–which Muslims like Taimaa are forbidden to eat. She worries that her family might struggle to fit in and could face strong anti-Muslim sentiment. “From the information they gave us about [Estonia], it’s very bad for us. You don’t have the freedom to practice your religion,” she says.

But after the initial shock had worn off, Taimaa was more sanguine. She checked her daughter into the Athens children’s hospital and was relieved to find that the prognosis for Heln was good, despite the delayed treatment. In the end, she admits, refugees don’t have a choice about where they will go. There is no process of appeal. For Taimaa, Estonia offers a chance for security and stability: “We have to be grateful to the country that is taking us, that it’s welcoming refugees and giving them a house and many other things that we need and lost back in our country.” If there is no mosque, she adds, she can always pray at home.

After a year in limbo, the only thing she wants now, she says, is to get started on her new life, whatever it holds. But even that is up in the air: they still have one more interview at the Estonian embassy–a formality that some refugees warn can be grueling. Officials try to make sure the asylum seekers are a good cultural fit, and there are rumors that the refugees will be asked why they don’t eat pork and that the women will be told to take off their headscarves for photos. After that it could take several more weeks for the Estonians to organize the transfer. In the meantime Taimaa has to keep waiting. Everything is different now, she says with a sigh. But nothing has changed. 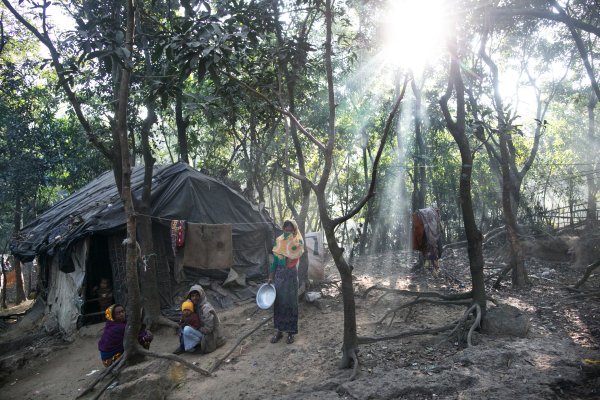 These 5 Countries Prove the Refugee Crisis Isn't Just About the Middle East
Next Up: Editor's Pick