How the Enlightenment Predicted Modern Populism

In a speech to the military, Ayatullah Khamenei said President Trump had shown America’s “real face”
SIPA/Newscom
Ideas
By Bryan Walsh
Bryan Walsh is the author of End Times: A Brief Guide to the End of the World. Previously, he was TIME’s International Editor, its energy and environmental correspondent and was the Tokyo bureau chief in 2006 and 2007. He lives in New York.

By nearly all objective signs, the 2016 election should have been a cakewalk for a mainstream candidate. The economy had mostly recovered from the 2008–2009 recession. Unemployment was low, and despite the occasional small bump, so was violent crime. The Middle East may have been in bloody chaos, but few U.S. soldiers were dying there, as they so recently had by the hundreds in Iraq and Afghanistan.

Yet it was the candidates of anger who captured the public imagination — first Bernie Sanders with his rebellion against globalization and free trade, and then, conclusively, Donald Trump, who added dark notes of fear and loathing. By the time of his Inauguration speech, Trump was painting a frightening portrait of “American carnage,” one that bore little relation to American reality, but one that still resonated in the angry minds of his core supporters and throughout the suddenly restive West.

We all now live in this age of anger, and many — including much of the political and media class — have treated it like a strange new phenomenon, driven by the mostly white, working-class voters (“the forgotten men,” as Trump calls them) who put a fearmonger in the Oval Office. But in his erudite new book, Age of Anger: A History of the Present, which was conceived before Brexit and Trump, the Indian nonfiction writer and novelist Pankaj Mishra argues that our current rage has deep historical roots. And they date all the way back to the dawn of the Enlightenment.

A quick high school history recap: in the 18th century, the thinkers of the Enlightenment, men like Voltaire and Adam Smith, sought to free humankind from what they saw as the constraints of religion and tradition so human beings could pursue their individual interests. These same ideals, Mishra argues, underpin the modern embrace of free-market capitalism, which took sole position on the world stage after the collapse of state socialism in 1989. This was the “end of history,” in political scientist Francis Fukuyama’s phrase, and despite the significant speed bump of 9/11, it seemed inevitable that it would transform — and modernize — every corner of the world, leading to untrammeled economic growth for all.

But the progress of reason was always shadowed by irrationality. Humans aren’t purely rational actors — at least most of us aren’t — and while the spread of the Enlightenment permitted many to pursue knowledge and wealth through self-interest, it was profoundly disruptive for others, as the sometimes oppressive security of religion and tradition was swept away. The result was what Mishra — borrowing from Nietzsche — terms “ressentiment,” or “the mismatch between personal expectations, heightened by a traumatic break with the past, and the cruelly unresponsive reality of slow change.” It was a toxic mix of envy, humiliation and powerlessness. And it led to rebellion.

For some — from the anarchists of the 19th century to the soldiers of ISIS today — that rebellion takes the form of ever more horrifying acts of violence. But the more pervasive shift is psychological. Even though the economy has recovered from its 2008 crisis, the promises of growth for all have still not materialized for many, and the idea that “the future would be materially superior to the present,” Mishra writes, “has gone missing today.”

What’s left behind is a rage that is in many ways justified, as global capitalism — though it has raised living standards around the world — seems to do little but show people what they can’t have. And that rage is channeled by increasingly authoritarian leaders — like Russia’s Vladimir Putin, India’s Narendra Modi and Trump — who promise they alone can provide easy solutions at the expense of even easier enemies. What they offer has failed before in history, at incalculable human cost — yet at this moment, they seem to be the only ones speaking.

That is the most sobering part of Mishra’s book. Nineteenth century rebels had real political alternatives, even if some, like communism, would prove catastrophic. But where do we turn now? Mishra nods toward the need to move beyond the “religion of technology and GDP and the crude 19th century calculus of self-interest,” although just how we do that, and where it might take us, he doesn’t say. The best we might be able to do, in this age of anger, is fight ressentiment with resistance. 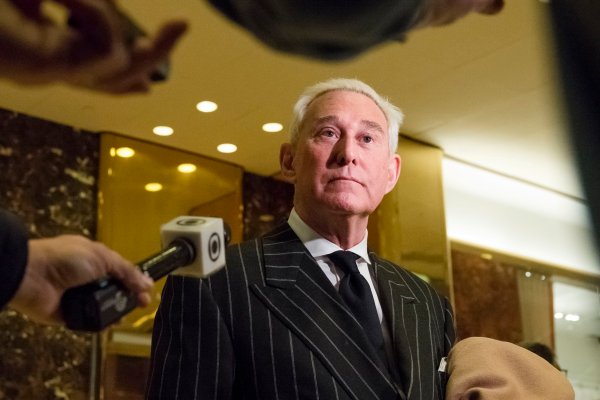 9 Questions with Roger Stone
Next Up: Editor's Pick