Ted Cruz Congratulated a Woman With MS. Her Reaction: ‘What Did He Just Say?’

A Maryland woman who suffers from multiple sclerosis said it was “unnerving” that Sen. Ted Cruz congratulated her for “dealing” with the disabling disease during Tuesday night’s Obamacare debate.

Carol Hardaway was among the participants who posed health care questions to Cruz and Sen. Bernie Sanders at a Washington, D.C. town hall forum hosted by CNN. The 63-year-old substitute teacher directly asked Cruz whether she would keep her Medicaid coverage after President Donald Trump’s threatened repeal of the Affordable Care Act—a law she said helps her pay for treatment and medications for M.S.

Hardaway told TIME on Wednesday that the odd wording didn’t “sink in” until she left the venue. “When I got home, I was like, ‘What? He’s congratulating me? What did he just say?’ And I replayed it again, and I said, ‘No, he didn’t,’” she said. “It was a little bit unnerving to be honest.”

Hardaway was diagnosed with M.S. nearly 30 years ago and said the incurable disease that disrupts the nerves has affected her ability to walk, talk and see. “You feel as though you just can’t move anymore,” she said.

Hardaway fell into the high-risk pool among health insurance seekers, which meant she had to pay exorbitant costs for medication and deductibles until she enrolled in Obamacare. “If they repeal Obamacare, I’m done,” she said. “I don’t know what I would do because the medications that I’ve been able to access have literally given me back a quality of life.”

Hardaway said a producer for the show reached out to her to participate in the debate. She agreed to show how the health care law has changed her life. “I feel like somebody has to put a face to what I’ve been going through,” she said. “For me, it’s personal because the system is working for me.”

A Cruz spokesperson released a statement on the exchange on Wednesday. “As he did with every questioner last evening, Sen. Cruz’s goal was to identify with their battles, and to express his concern for and understanding of the immense difficulties they have had to overcome and in many cases may still be overcoming,” the statement said.

Hardaway said she was more upset that Cruz did not give her a direct answer on her Medicaid question than that he congratulated her. But she still found his words surprising. 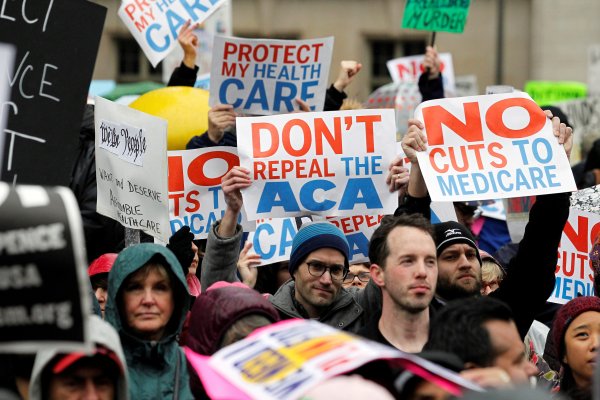 Republicans Are Starting to Worry About 'Trumpcare'
Next Up: Editor's Pick