The Fistfight Behind the Rule That Silenced Elizabeth Warren, as Described in 1902

The rule in question states that, “No Senator in debate shall, directly or indirectly, by any form of words impute to another Senator or to other Senators any conduct or motive unworthy or unbecoming a Senator.” It was adopted following an infamous fight on the Senate floor that took place in 1902.

But what exactly happened in 1902?

The details were described on Feb. 28 of that year by the Senate Committee on Privileges and Elections, which presented a full report on a “personal encounter” between Senators “Pitchfork Ben” Tillman—whom TIME later called “one of the most unabashed racists in Southern history”—and John McLaurin, both of South Carolina. The story, the committee declared, was not possible to sum up any better than had already been done by the official record on the proceedings of the previous week.

The exchange in question, as quoted in that report, begins after Tillman has said that a friend, whom he will not name, told him that Wisconsin Senator John Spooner had come by votes for a treaty in an unsavory way:

Eventually, the Senator from South Carolina was called to order. Asked which one he meant, Teller responded as such: “This one, and the other one, too, for that matter.”

As to what had actually happened during the “encounter,” one contemporary report noted that Tillman “literally” climbed over another Senator to “spring like a panther” upon McLaurin. “As they clashed, Tillman aimed a right-hand smash at his colleague’s face,” the report continued. “Partially warding it off, McLaurin received the blow upon the forehead, just about the left eye, and promptly returned it, apparently striking Tillman’s nose.” And, in the course of breaking up the fight, the assistant sergeant-at-arms also received a punch in the face for his trouble.

The two were declared in contempt of the Senate. “That the conduct of the two Senators was an infringement of the privileges of the Senate, a violation of its rules, and derogatory to its high character, tending to bring the body itself into public contempt, cannot be questioned or denied,” the Committee stated. Though it was found that Tillman and McLaurin were not equally guilty — in short, Tillman started it — both were formally censured.

“Tillman survived the dishonor, was later re-elected to the Senate twice, and died in office. McLaurin served out his term, but did not seek reelection,” TIME would later note. “The bad blood between the two men was caused in part by McLaurin‘s unfounded charge that Pitchfork Ben was an ‘intellectual.'”

Seizing the opportunity, Massachusetts Sen. George Hoar proposed the addition of what became Rule XIX(2) to the Senate rules.

On Wednesday, Warren’s fellow Democrats spoke out to criticize the use of the rule to silence Warren—and they are not the first to take issue with its applications. As Neil MacNeil and Richard A. Baker note in their history of the Senate, the rule was intentionally vague, leaving the behavior in question up for interpretation, so that nearly anyone could be accused of breaking the rule and nearly anyone could avoid it, too.

While Rep. Horace Towner argued in Munsey’s Magazine in 1916 that the rule’s consequence was that it had made the Senate unfortunately boring and “somnolent,” that more pressing concern was voiced in 1951 by Sen. Herbert Lehman of New York, who raised the issue of the problem of Rule XIX’s breadth—the same issue Warren’s allies are attempting to raise today: that “any member of the Senate” can act as “the independent judge of what is and what is not a reflection and imputation of conduct or motives unworthy or unbecoming a Senator.” 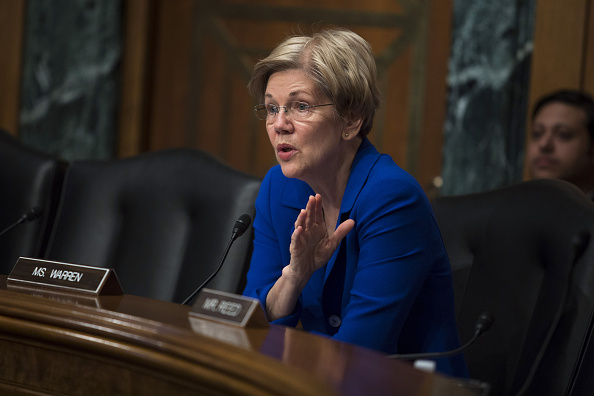 The Internet Is Turning Elizabeth Warren's Silencing Into a Rallying Cry: 'Nevertheless, She Persisted'
Next Up: Editor's Pick