In Kopi Es Tak Kie, a small café in Jakarta’s Chinese quarter, Glodok, the singsong of myriad Chinese dialects has for decades mingled with the more staccato Bahasa Indonesia. The business opened in 1927 as a street stall dispensing steaming mugs of coffee brewed from local java beans. After 10 years, it moved into its current whitewashed premises, where customers huddle around Formica tables to gossip beneath the din of clattering crockery.

Regulars whisper that Indonesia’s top gangsters used to congregate here to slurp noodles and to plot. Recently, though, the clientele has turned significantly more salubrious: photos of Joko Widodo, the Indonesian President popularly known as Jokowi, pepper the walls.

But what the President would have heard emanating from the streets of Jakarta recently grates with the cultural harmony on show at Tak Kie.

A virulent Islamist movement led by the Islamic Defenders Front (known after its Indonesian initials as the FPI) has taken to the streets in an attempt to oust Jakarta’s governor, Basuki Tjahaja Purnama. Popularly known by his Hakka nickname Ahok, the ethnic Chinese Christian previously served as deputy governor under Jokowi, whom he succeeded when Jokowi became President.

Ahok is now standing for another term, hoping to win a mandate in his own right. However, the FPI insists that no Christian — especially a Chinese one — should lead the capital of world’s largest Muslim-majority nation, citing a Quranic verse that warns against allying with Christians and Jews. The issue is particularly charged because the high-profile gubernatorial job is seen as a stepping-stone to national politics.

The FPI’s campaign threatens to drive a wedge between Indonesia’s Muslim majority and its 3 million ethnic Chinese citizens. The famously blunt-speaking Ahok did not help the situation when he told a crowd on Sept. 27: “Ladies and gentlemen, you don’t have to vote for me — because you’ve been lied to by those using [the Quran’s] Surah al-Maidah verse 51. That’s your right.”

Ahok’s citation of a Quranic verse, and his disputation of the hard-line interpretation of it, infuriated the FPI. A doctored recording of the governor’s speech — carefully edited to amplify the outrage of protesters — went viral. Led by firebrand cleric Habib Muhammad Rizieq Shihab, the FPI accused Ahok of blasphemy and organize three massive protests that paralyzed downtown Jakarta. Another is slated for Saturday.

The FPI is demanding that Ahok be jailed and also that Jokowi step down, since as his party is endorsing Ahok’s candidacy. Jokowi has met with FPI leaders in an attempt to quell their rancor, though many say this act simply legitimized their complaints.

Ahok has appeared in court to fight blasphemy charges while simultaneously campaigning for office in polls slated for Feb. 15. He is the most senior official ever to be charged with the offense and could face five years in prison. The blasphemy case, and the gubernatorial election, are being billed as a litmus test for Indonesia’s young, secular democracy, which is increasingly under threat from a radical Islamist right.

“The Ahok issue has been a rallying point that has brought many different strands [of radical Islam] together,” Sidney Jones, director of the Jakarta-based Institute for Policy Analysis of Conflict, tells TIME. “That is why the demonstrations have been so big.”

And increasingly militant. “The FPI is not a solid organization with one command system, like the police or military,” Indonesia’s national police chief Tito Karnavian tells TIME. “In Central Java, they have members who are also supporting ISIS groups.”

At one recent FPI demonstration outside the Jakarta Police Headquarters, many protesters appeared in camouflage gear. One jacket bore an embroidered AK-47 and the rubric “Defend Palestine.”

“The leader of Jakarta must be Muslim because he must give direction to the people,” said protester Muhammad Mahdi, 33. “But how can Ahok if he doesn’t follow our [Shari‘a] laws?”

Since the end of colonial rule in 1945, Indonesia’s leaders have sought to guard against religious extremism by rooting governance in the state ideology of Pancasila — belief in one God, a just and civilized humanity, national unity, democracy through deliberation, and social justice for all. But groups like FPI want to implant Shari‘a in Indonesia, placing religious doctrine above the rules written by government and courts.

“The Chinese community worry because FPI are growing bigger and more powerful,” says Latif. “We know that the FPI likes to attack people, sweeping businesses.”

Sweeping refers to the harassment of business owners by groups like the FPI, who seek to stop behavior that is contrary to Shari’a, such as the sale of alcohol or the employment of female staff who are not dressed according to conservative Muslim codes. The practice has often been employed by business rivals, who pay mobs under the cloak of Islamic righteousness, disguising what are essentially hoodlums for hire.

FPI’s own sweeping has even extended to shops that requested Muslim employees to don Santa hats in the run-up to Christmas. In cosmopolitan Jakarta, there are no end of potential targets. In Glodok market, rows of char siu pork hang outside shops selling Chinese liquor, as well as the tangerine trees, lanterns and trinkets synonymous with China’s Taoist Spring Festival.

Indonesia’s Chinese population has fallen victim to repeated pogroms over the years, most savagely in 1965 when an failed leftist coup against the dictator Sukarno sparked an anticommunist purge that claimed, depending on estimates, up to 2 million lives — predominantly of ethnic Chinese, irrespective of their political affiliation.

That massacre helped usher in the reign of similarly autocratic President Suharto, who put proscriptions on Chinese language and festivals. However, the “father of development” also cut business deals with Chinese tycoons; at his fall in 1998, Indonesia’s largest conglomerates were all controlled by ethnic Chinese.

More anti-Chinese riots followed Suharto’s toppling and, if left unchecked, many fear the actions of Islamist groups like FPI could trigger a bloody repeat. Especially as FPI’s anti-Ahok rhetoric has been echoed by secular, right-wing nationalists who fear the exploitation of Indonesian natural resources by Chinese firms, which they even accuse of inculcating a fifth column to spread communism.

“An alliance between the ultranationalist right and the hard-line Muslims could create more anti-Chinese sentiment than we’ve seen here since 1998,” says Jones.

Although most Chinese Indonesians are, like Latif, small-scale traders, and some are very poor indeed, there is a perception among many Indonesians that the community is fabulously wealthy. There are bitter complaints of reverse discrimination — apocryphal tales, for instance of even poor Chinese securing bank loans with greater easy than aristrocratic Javanese or Sumatrans.

Ahok’s rise has led to an unfortunate resurgence in these sorts of racial tensions and in identity politics. In early November, former President Susilo Bambang Yudhoyono, whom Jokowi replaced, warned that Indonesia would “burn with the anger of those seeking justice” unless Ahok was prosecuted. (Yudhoyono’s presidential term, from 2004 to 2014, corresponded with an emboldening of Islamist movements hobbled during the postcolonial authoritarian period. Not entirely coincidentally, Yudhoyono’s son Agus is running against Ahok for the post of Jakarta governor and appears a chief beneficiary of the FPI’s ire.)

Until the blasphemy controversy erupted, Ahok looked certain to win re-election. The grandson of a Guangdong tin miner, he has won plaudits for cutting through red tape since assuming Jakarta’s top job in 2014. The city’s previously opaque finances are now published online, and he nixed a stalled — though increasingly expensive — monorail system, instead fast-tracking a Light Transit Rail project. Construction for the latter is ongoing throughout the sprawling city of 30 million that accounts for a sixth of national GDP, but where infamous snarled traffic is a tremendous drag on productivity.

Ahok has also developed a reputation as a straight talker with no tolerance for corruption or incompetence. City residents speaks in glowing terms to TIME of being able to contact their local authorities through social-media accounts set up by Ahok in order to report illegal trash piles (another notorious Jakarta problem) and then to see them miraculously cleared away. Videos of Ahok berating inept transport officials have gone viral, striking a cord with many tired by decades of endemic corruption, though his famously blunt style has also made him enemies beyond FPI.

Ahok’s program of bulldozing slums and rehousing the occupants elsewhere is rife with accusations of inadequate consolation and compensation. “Ahok has this image of the city becoming like Singapore — a clean, sanitized streetscape with concrete rivers,” says Elisa Sutanudjaja, the director of the Jakarta-based Rujak Center for Urban Studies and noted Ahok critic. “And with that view in mind he tried to clean out these communities.”

Sutanudjaja, who is also ethnic Chinese, blames Ahok for sowing communal division with his brusque manner. “Public officials have a certain standard not to provoke or offend people,” she says. “It’s not related to his ethnicity but about his position as a public official. It’s like having Donald Trump saying ridiculous things.”

Nevertheless, latest polls published by the newspaper Kompas on Thursday put Ahok at eight percentage points ahead of rivals. Whether he can stay out of jail is another story. But for now, it looks like Jakartans are rejecting the FPI’s invective.

A lot of Chinese aren’t buying into identity politics either. “I still don’t know who I will vote for,” says Latif, hilariously. “Ahok is too loud, too rude. A lot of Chinese people don’t like him.”

— With reporting by Febriana Firdaus / Jakarta 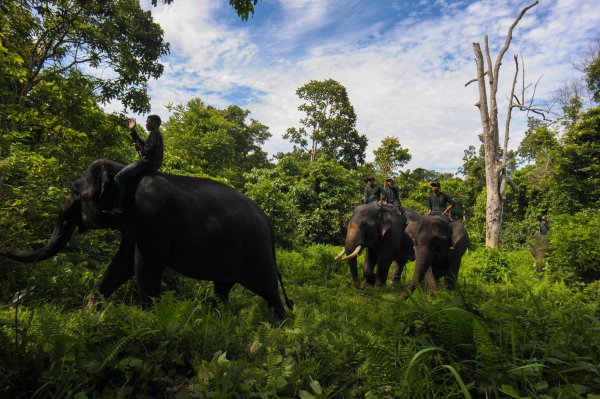 Sumatra's Last Intact Rainforest Is Under Threat
Next Up: Editor's Pick