The Biggest Problem with Spotify Is Being Fixed Now

For the longest time, I’ve stayed away from Spotify for one major reason: The inability to organize a collection of favorite music made it a nonstarter for me.

Starting today, that’s changing. As part of a significant redesign, Spotify is adding a “Your Music” section to its apps and website. At last, you can sort your favorite tracks by artist, album or song. It works just like iTunes–and like every other on-demand streaming music service that has offered this feature for ages. Spotify had been testing a similar “Collections” feature for months, but never rolled it out under the old design.

The fact that Spotify has grown to 24 million active users without a proper music collection feature is not lost on me. Much of that may be due to Spotify’s business model, which offers a free, ad-supported version to lure in users. If you’re only using the free version of Spotify–and therefore not trying to replace your MP3 collection with it–the inability to cultivate a streaming record collection may not be a big deal.

But I suspect that many people don’t care about sorting through an album or artist view anyway. We live in the age of the playlist, which is indeed the main way that Spotify users have organized and cataloged their music up until now. I like a good playlist as much as anyone, but growing up on tapes and CDs has conditioned me to think in terms of the entire album, not just a few favorite songs. While Spotify has always allowed you to “star” favorite albums, doing so only added them to a massive, unorganized list of tracks.

Spotify has good reason to add a “Your Music” collection now. In December, the company expanded its free service, so you can listen to playlists or individual artists on shuffle mode from a smartphone, or listen to any track on-demand from a tablet. Having full access to your collection on a smartphone might nudge more users toward paying for a $10 per month subscription, which also removes advertisements, provides greater sound quality and supports offline listening.

Spotify is rolling out the redesign and “Your Music” feature to iOS, its website and its desktop apps starting today, and support on other platforms is coming “soon.” 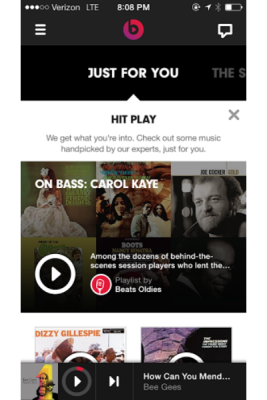 Beats Music's Move to an Open API Brings It Up to Par with Competitors
Next Up: Editor's Pick