Water protectors protest as police line the hill at Standing Rock on Nov. 24, 2016, during an ongoing dispute over the building of the Dakota Access Pipeline.
Jessica Rinaldi—Boston Globe/etty Images
By Valerie Volcovici / Reuters

The U.S. Army Corps of Engineers will grant the final easement needed to finish the controversial Dakota Access Pipeline, according to a court filing Tuesday.

The line had been delayed for several months after protests from Native American tribes and climate activists. The $3.8 billion line, which is being built by Energy Transfer Partners , needed a final permit to tunnel under Lake Oahe, a reservoir that is part of the Missouri River.

The Standing Rock Sioux tribe, whose reservation is adjacent to the line’s route, has said they will fight the decision. The Army Corps had previously stated that they would undertake further environmental review of the project. The tribe was not immediately available for comment.

The 1,170-mile line will bring crude oil from North Dakota‘s Bakken shale region to Patoka, Illinois, and from there connect to the Gulf of Mexico, where many U.S. refineries are located. The tribe had fought the line for months, fearing contamination of their drinking water and damage to sacred sites on their land.

Their protests, along with those of climate activists, resulted in the Obama administration’s decision to delay a final permit that would allow construction under the Missouri River.

President Donald Trump, days after being sworn in, issued an executive order directing the U.S. Army Corps to smooth the path to finishing the line. Tuesday’s filing was made in U.S. District Court in Washington D.C. 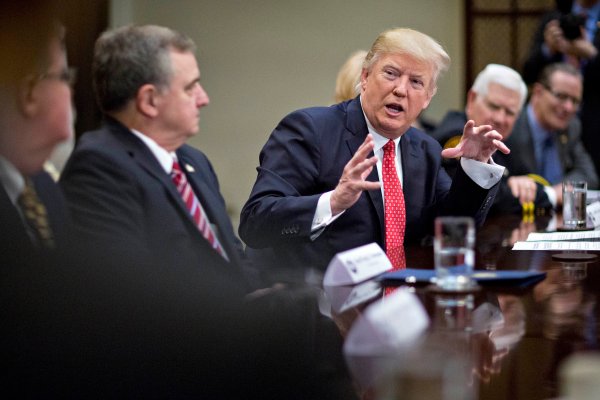 President Trump Falsely Claims the U.S. Murder Rate Is the Highest in 45 Years
Next Up: Editor's Pick