These 5 Keyboards Can Make Your Workday So Much Better

When was the last time you really thought about your keyboard? Maybe never — it came with your computer, perhaps, or was waiting for you in your cubicle, and you’ve been happily clicking and clacking away ever since.

But given the sizable chunk of the day many of us spend inputting text and numbers into computers, it’s worth taking a step back and asking: Do I really love my keyboard? A keyboard upgrade, after all, can mean more satisfying typing, less wrist pain and even make you the envy of the office.

Here are five replacement keyboards that we’ve tried and we recommend, ranked from cheapest to most expensive.

Who says you have to break the bank for better typing? This AmazonBasics model doesn’t have the bells and whistles of high-end keyboards, but it’s plenty comfortable and quieter than a Russian stealth submarine. Considering the affordable price, I’d recommend this one if the keyboard that came with your computer broke and you’re looking for a replacement without cracking open your piggy bank. My biggest complaint? It doesn’t have those little kickstands in the back to give it vertical lift, which I like.

This Logitech keyboard was designed for hardcore video gamers, who need ultra-responsive keys to stay on top of their competition. But it also works great even if your only upcoming boss battle is over those overdue Excel spreadsheets. It’s extraordinarily comfortable thanks to an attached wrist pad, it’s spill-resistant (so it’s better able to survive the occasional coffee clumsiness), and its programmable key lighting can make your desk feel like a discotheque. This one’s got the best price/performance mix of the bunch. One caveat: It’s on the loud side, though it’s not as bad as some of the other entires on this list.

You know how certain smells can trigger a rush of nostalgia, instantly beaming you back to another time and place? That’s what it’s like to type on this Unicomp keyboard, which is designed to replicate classic IBM clackers. This one’s more comfortable than keyboards of yore, though, thanks to an arching design that improves the ergonomics. But there’s a price to pay for old-school cool: It’s so loud that I couldn’t use it for more than an hour without getting the sneaking suspicion that my coworkers wanted my fingers to fall off. If you’ve got a home office, though, go bananas.

If you own an Apple computer, it makes some degree of sense to stick with an Apple keyboard. It’s not required — any keyboard, generally speaking, should work with any computer. But if you pick up one of the other models on this list, you’ll have to learn your way around a slightly different layout than what you’re used to. All that said, Apple’s Magic Keyboard is a great option if you like Apple keyboards. But it can feel cramped if you’ve got bigger hands, and the key travel is shallow, like on Apple’s laptops. Some people like that feeling, but I prefer deeper, more satisfying travel. One plus: This was among the quietest keyboards I tested, if you’re concerned about annoying your family or officemates to death. (Apple also makes a larger keyboard for about $50.)

Another gaming-optimized model that doubles as a personal light show, the Razer Blackwidow Chroma V2 has a feature that I firmly believe should be standard on every desktop keyboard: A headphone jack. In this case, it’s on the right side, letting you enjoy some tunes while you type away without a wire getting between you and the keys. Otherwise, the Razer is similar to the Logitech in terms of typing comfort, but it’s hard to justify the price if you’re not a competitive gamer. That said, this is the one I’d get if money is no object. And its customizable lighting makes it undeniably cool-looking — I got lots of curious office onlookers while testing this one out.

Correction: The original version of this story incorrectly described the Logitech G213’s wristpad. It is not detachable. 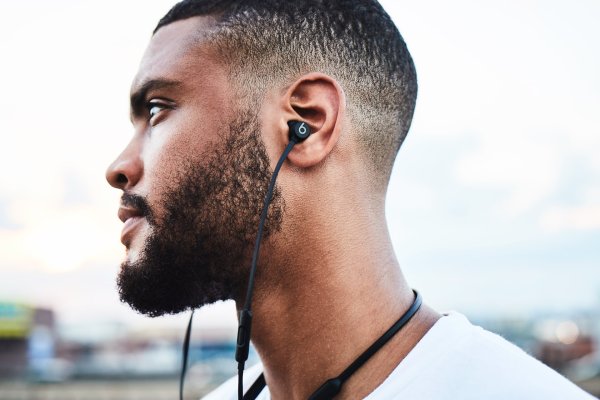