Everything We Know About the Second Season of Stranger Things

Warning: This post contains potential spoilers for the second season of Stranger Things.

In a summer of disappointing blockbusters, one rare show became a cultural phenomenon: Stranger Things. Netflix’s nostalgia-packed sci-fi series scored intense engagement and rave reviews, which sets expectations for the second season high. The new season will still focus on the same core group of characters, and producer Shawn Levy told Vanity Fair that while it will be “bigger and potentially darker” they’re still aiming for the first season’s “magical storytelling.” It premieres on Oct. 27, just in time to freak you out, but until then, here’s everything we already know about the second season.

MORE: The 10 Best References You Might Have Missed in Stranger Things

Fans were treated to a number of revelations about the second season after a full trailer dropped at Comic-Con: The town might be an even risker place to be thanks to an arachnid-looking monster the kid’s dubbed “the shadow monster” who’s already laid a bunch of eggs. But it looks like the kids are determined to trap whatever it is. Luckily, there are reinforcements. Powerful Eleven responds to Mike’s call for help by trying to get back to the “real world.”

And those monstrous Upside Down creatures Will was incubating by first season’s end? They might be contaminating the area. Will’s take: “it” doesn’t want him, it wants “everyone else.”

The action picks up in 1984 around Halloween, about a year since the local government lab unleashed all that Upside Down chaos. (See the date Oct. 30 on the surveillance screen in the trailer.) As the official description puts it, “everything seems back to normal…but a darkness lurks just beneath the surface, threatening all of Hawkins.”

But the story will venture outside the Indiana town too, creators Ross and Matt Duffer told Entertainment Weekly. It’s also going to plunge us even deeper into the “alternate dimension” to answer long-simmering questions and expand on the story’s mythology.

A press release described the setup this way: “It’s 1984 and the citizens of Hawkins, Indiana are still reeling from the horrors of the demagorgon and the secrets of Hawkins Lab. Will Byers has been rescued from the Upside Down but a bigger, sinister entity still threatens those who survived.” One more teaser-y revelation: MKUltra came to Hawkins to begin experimentation back in 1953.

Good news: The young core cast will return, including Will and Eleven. Bad news: The creators promise Barb won’t be “forgotten,” but she is definitely a goner, which will be a chief concern for at least one person, her friend Nancy.

Bonus: a number of newcomers will show up to live that small town hero life. So far there’s a new protagonist Max, a “tough and confident” 13-year-old female (Sadie Sink); her bad boy 17-year-old brother “of a violent and unpredictable nature” Billy (Dacre Montgomery); and an “emotionally damaged” young woman Roman (Linnea Berthelsen), according to Netflix.

The first teaser trailer makes it clear that the Upside Down’s horrifying history of kid-snatching is back with a vengeance. “The World is Turning Upside Down,” reads the official description, and from the looks of the massive “Shadow monster” literally storming into town, the multi-limbed creepy crawler could be invading the real world during prime school hours. (That is, if you believe Dustin’s “uh oh” face.)

Be warned though. There’s a chance that everything we see through Will’s eyes may not actually be happening. “He seems to be seeing images from the Upside Down—the question is whether they’re real or not,” Matt explained to EW, teasing that he might be suffering from “post-traumatic stress disorder.”

Things aren’t that much better for the kids who survived the “other side.” In what will likely be the beginning, Will Byers basically got rescued from the Upside Down in the first season to…participate in a sinister-looking lab experiment and Eleven survived her brave face-off with the Demogorgon in the first season to…have more standard freakouts as she watches the world fall apart. Only time will tell if our heroes triumph.

As all the kids are still reeling from Demogorgon trauma, prepare to learn more about the lives of the squad. For Mike’s part, he’s feeling a bit lost. “He’s kind of given up in the sense that he has nobody to fight for anymore,” Finn Wolfhard, who plays the character, said at a June panel.

MORE: The Stars of Stranger Things and 13 Reasons Why Are Having a Bromance Moment on Twitter

Season 2 will have nine total episode “chapters.” Some of the most intriguing titles are: “The Pumpkin Patch,” “The Storm” (possible nod to the ominous storm clouds in the trailer) and “Pollywog” (remember the finale? fans speculate this is all about the slimy Demogorgon spawn that Will coughed up the last time we saw him). Finally it ends with “The Lost Brother,” which could mean Eleven has a powerful sibling, or simply that we’re about to lose another kid.

Even more compelling, Gaten Matarazzo (Dustin) revealed that he bonds with a pet. “It’s obviously not from this planet or this dimension,” he explained to EW.

From Stephen King to Steven Spielberg, Stranger Things has already referenced enough influences to fill a Demogorgon pool party, and this season will be no exception. Expect a heavy James Cameron vibe, as the Duffers promised in an interview with EW. The kids will even hit middle school in Ghostbusters costumes on what looks like a regular school day, proton packs and all. Also influential will be the gothic adventure game Dungeons and Dragons (again), and teasers hint that the show could draw a parallel to the 1973 movie Mad Max. (The inaugural chapter isn’t so subtle: “Mad Max.”)

The Return of Barb

Barb’s back (in memory at least.)

“Especially this season, Barb’s a big part of Nancy’s story line and that drive to — I don’t know how to say it otherwise — to find justice,” Natalia Dyer who plays Nancy told EW, referencing the demand for justice for the fan favorite who died in season 1. “There are a lot of loose ends there that Nancy feels need to be addressed.” 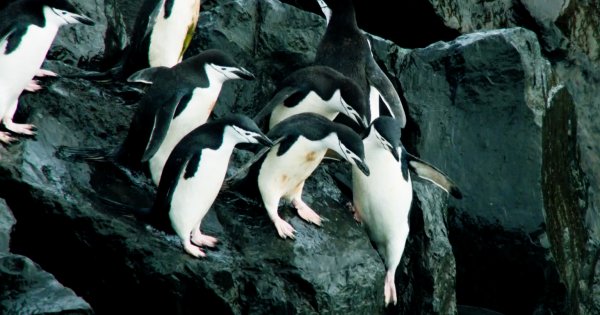 Watch These Courageous Penguins Cliff-Dive for Food in an Exclusive Clip From Planet Earth II
Next Up: Editor's Pick