As President Donald Trump’s cabinet picks begin to complete the confirmation process, one of the nominees has drawn particular attention for the notable delays facing his hearings: Secretary of Labor nominee Andrew Puzder, who said on Monday that he once hired an undocumented immigrant as a household worker and whose scheduled hearings have been delayed several times.

But, while Puzder has yet to go before the Senate, at least some of the arguments he is likely to make on the topic of U.S. labor law will be familiar to those who have followed the history of the minimum wage.

The Hardee’s and Carl’s Jr. CEO is sure to be grilled by the Senate on his past statements about the rejection of higher wages and dismissiveness of unions, as well as charges against his companies of wage- and hour-law violations of the Fair Labor Standards Act (FLSA). Puzder has been particularly outspoken on the Affordable Care Act (ACA), claiming it has increased the cost of health insurance for everyone and thus keeps people from going out to eat.

His lament of a “government-mandated restaurant recession,” however, asserts nothing new. The hospitality industry has long blamed their woes on the fickleness of consumers, who could always substitute their own labor for the services offered by such businesses unless prices or quality enticed consumers away from home-cooked meals.

A half-century ago, when Congress sought to extend the FLSA to new groups of workers, predominantly female and often African American, Puzder’s predecessors in the restaurant business fought inclusion of their service industries into the nation’s wage and hour law. A legislated requirement to increase worker wages and provide overtime led employers to predict ruin. Since labor costs in restaurants constituted over a quarter of expenses, they argued that paying their employees the new minimum wage, proposed to rise from a $1.25 in 1965 to $1.40 an hour by1967, would require them to increase prices. Higher prices, they argued, would force the consumer to stop eating out. “The potential customer may eat at home, or if forced to eat away from home can carry his own meal in his meal bucket,” testified J.W. Putsch, Chairman of the Government Affairs Committee of the National Restaurant Association and the American Motor Motel Association, during 1965 hearings before Congress.

Along with the supermarket, Putsch confessed, “we consider the housewife our most serious competitor.” He offered Congress a lesson in home economics: “In her dual role as cook and administrator of the family budget, she is able to limit greatly our ability to raise menu prices. If the cost of eating out goes up, the housewife is quick to react.” High prices meant “we lose a whole family of customers.”

The spokesman for the American Institute of Laundering concurred in contending that the housewife would clean soiled garments herself or go to a cheaper local self-service laundromat rather than pay more at the dry cleaner. Women’s unpaid domestic labors were interchangeable with service sector jobs—but, unlike the employee, the housewife came under no minimum wage law. She worked for free.

To ease such business concerns, Congress included in its 1966 amendments to FLSA a lower subminimum “tipped wage” for workers who earned at least $20 a month in tips. At the time, the tipped wage was set at 50% of the minimum wage. The National Restaurant Association had insisted, “No wage law could fairly be applied to our industry which did not adequately consider the tremendous number of tip employees . . . and the true extent of their tip income.” The idea was that employers would make up the difference between the tipped wage and the minimum wage if tips fell short.

Restaurateurs would have it both ways: the tipped wage would encourage workers to hustle without paying them more. On the one hand, industry lobbyists argued that employers had no knowledge of the extent of tips nor did they have control over their division among workers. On the other, they insisted that workers regularly earned more than the minimum wage. Asked the head of the American Hotel and Motel Association, “If an employee with a complete sense of honesty reports tips in excess . . . is the employer forgiven the necessity of paying any cash wage?” A lower tipped wage relieved that dilemma, excused restaurant and lodging establishments from paying the minimum wage, and thus saved them from the housewife’s revenge.

The world of 1960s restaurant executives “in business to serve people with people,” as Putsch put it, may seem lost amid today’s self-service and food on the go. But employers make similar arguments about the need to keep wages low because otherwise customers can just choose to stay home. Andrew Puzder, for one, has even put a futuristic twist on this logic, so certain he is of the need to prevent labor cost increases that he has spoken of the benefits of replacing employees with robots, which are “always polite…always upsell, they never take a vacation, they never show up late, there’s never a slip-and-fall, or an age, sex, or race discrimination case.”

And so it is important to note that J.W. Putsch’s dire prediction in 1965 never materialized. After the increase in the minimum wage in 1967 and 1968, industry employment trended upward. Indeed, except during the economic recessions in 1990-1991 and 2007-2009, restaurants have continued to grow. Meanwhile, some 10 million tipped workers—predominantly adult women, many of whom are single mothers—actually receive less than 30% of the minimum wage. They are among the low-income families that the ACA potentially has benefited; with higher wages and better benefits, they could afford to more frequently patronize establishments like those in Puzder’s fast-food empire.

History has already showed that the idea that better-compensated restaurant workers hurt the industry is unfounded, and newer studies show that continues to be the case: Though Puzder relied on a market survey that equated higher health care with lower fast food spending when making his case against ACA, most studies dispute this conclusion, given that the restaurant industry continued to grow last year at around a 6% clip. A comparison of insurance premiums and industry growth, for example, found no correlation between higher health costs and lower fast-food employment.

If, as Secretary of Labor, Puzder wants to encourage restaurant-going, he’ll need to look to new ideas for growth rather relying on the discredited arguments of a half-century ago.

Eileen Boris is Hull Professor of Feminist Studies at the University of California, Santa Barbara. 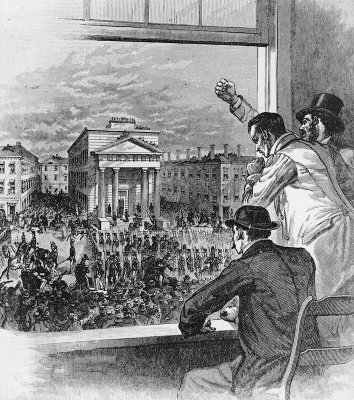 What the Fugitive Slave Act Can Teach Us About Sanctuary Cities
Next Up: Editor's Pick