Campaign Websites in 2014 Aren’t Always What They Seem

Hardball politics and campaign trickery are as American as apple pie, but even in that rough and tumble world, some rules apply. A new Republican fundraising tactic reminiscent of “spoofing” telemarketing scams has some asking where the line is these days between clever campaigning and fraud.

At first glance, AnnKirkpatrick.com looks like any normal campaign website. A big picture of the smiling Arizona Democrat stands next to a “Kirkpatrick For Congress” banner above a fat “DONATE” button, all in the same colors as those used by the real website for Kirkpatrick, who’s fighting to keep her House seat. Read closer and the text of the site reveals lines like “Kirkpatrick is a huge embarrassment to Arizona,” but anyone who didn’t bother to read the site closely (or who couldn’t due to bad eyesight) before trying to make a donation to Kirkpatrick’s campaign would find that they’d just contributed to the coffers of the National Republican Congressional Committee—the House GOP’s campaign arm backing Kirkpatrick’s opponent.

Annkirkpatrick.com is one of a series of websites (TIME has found 16, so far) the NRCC has set up that are clearly designed to trick the viewer—at least at first—into thinking they’re on a legitimate campaign website. The tactic smacks of “spoofing” scams, whereby spammers masquerade under fake phone numbers or email addresses to win trust (it’s how you might have once received an email that looked addressed from a friend but turned out to be a plaintive plea from wealthy Nigerian prince). But the line between clever and criminal is an ambiguous one in American politics, and anyone claiming to be shocked by less-than-truthful campaign materials hasn’t been around much.

No one has formally accused the NRCC of wrongdoing publicly, and it’s not at all clear the group has crossed a legal line. The NRCC stands by the tactic and mocks Democrats for failing to grab up Internet real estate important to the party’s candidates. “Democrats are behind the game in digital,” NRCC spokeswoman Andrea Bozek said. “They should be buying the URLs for their candidates. I think that’s a pretty basic campaign tactic.”

Bozek said the NRCC has been promoting such sites for the past year and intends to roll out more of them as the midterm elections heat up, while also buying up domain names for their own candidates by the hundreds as a defensive maneuver.

Not surprisingly, the Democratic Congressional Campaign Committee, the NRCC’s counterpart, feels differently. “It’s not the DCCC’s practice to make websites that that could be confused with the opponent’s site,” spokeswoman Emily Bittner said.

These aren’t the first instances of candidates using web addresses that look at first like rival websites, and the tactic has bipartisan bona fides. Democrats in Florida, for instance, own Jollyforcongress.com, which one might think to be a site for David Jolly, a Republican running in a House special election. The difference is that jollyforcongress.com redirects to a site with all the look and feel of a negative ad, rather than a spoof site. At issue is whether or not the NRCC’s new line of spoofed fundraising websites cross the line or, per Federal Election Commission regulation, “clearly indicate opposition to the named candidate.” In at least one instance, reported by the Tampa Bay Times on Monday, a Florida doctor accidentally donated to the NRCC through a spoofed website for Democrat Alex Sink (that site has since been taken down and the NRCC gave the doctor his money back).

At least one campaign law expert thinks the NRCC has gone too far.

“The law seems pretty clear to me and the sites along these lines that I’ve looked at the past few months seem to clearly violate Federal Election Commission regulations,” said Paul S. Ryan of the Campaign Legal Center. “In my view it is not the case that these websites clearly and unambiguously show opposition. On the contrary the URLs of these websites would lead a reasonable viewer to think the websites are supporting the candidate.”

“If it were a consumer product we were talking about it would be illegal—or at least you’d get the better business bureau all over you,” said Kathy Kiley of the Sunlight Foundation. “It’s just another example of how un-transparent and shady the system of funding political campaigns has become.”

Sheila Krumholtz, executive director of the Center for Responsive Politics, a nonpartisan group that tracks the influence of money in politics and public policy, said it’s not clear the NRCC has crossed a legal line and that regulators need to weigh in on the matter. But don’t expect that anytime soon: The FEC is notoriously gridlocked on a host of enforcement matters.

“One side may legitimately feel that they have been defrauded from donations that were intended for them and the other side will naturally suspect sour grapes in politics,” Krumholtz said. “This is something only the FEC can decide.” 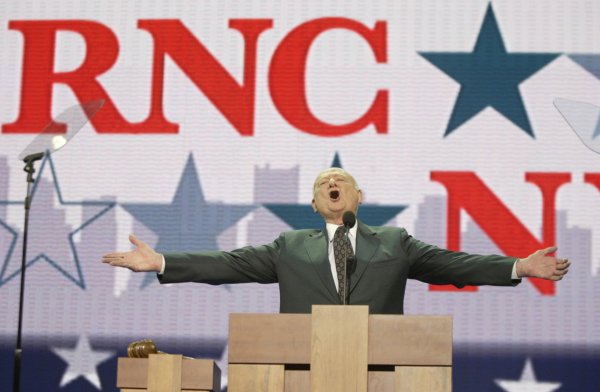