Despite Trump's 'One China' Pledge, Plenty of Obstacles to Smooth Sino-U.S. Ties Remain

A Chinese magazine with a cover story naming then-President-elect Donald Trump their Person of the Year for 2016.
Greg Baker—AFP/Getty Images
By Kevin Lui

On his 20th full day in office, President Donald Trump finally had his first conversation with his Chinese counterpart.

He reportedly told Xi Jinping, during what was described as an “extremely cordial” call, that the U.S. would honor the “one China” policy. But while that has eased immediate tensions between the world’s top two economies, potential flash points remain.

The democratic aspirations of China’s freest city, Hong Kong, could be one. A pro-independence group in Hong Kong sent a letter Wednesday to the White House, urging Trump use the power of executive orders to intervene in Beijing’s continuous encroachment of rights and freedoms in the city.

“Blocking the arrogant, lawless and dishonorable communist regime from harming the world through Hong Kong is of the common interest of the U.S. and the city,” read a statement from the Hong Kong National Party.

“We can see that the majority of [Trump’s] team take a firm, hawkish and unfriendly stance towards China,” convener Chan Ho-tin tells TIME.

During his campaign, Trump was markedly more hostile toward China than previous candidates.

Trump repeatedly took aim at Beijing on the campaign trail — during one debate with Hillary Clinton, Trump not only claimed falsely that climate change was a Chinese-invented hoax but also accused it of “using our country as a piggy bank to rebuild” itself. He also suggested, when President-elect, that the U.S. shouldn’t “have to be bound” by its four-decade recognition of China as one single entity “unless we make a deal.”

Then there was the call from Taiwan President Tsai Ing-wen, which Trump took, prompting frantic reactions from people living in the mainland, and a forceful response from Beijing that closer U.S.-Taiwan links were “out of the question.”

Then, during his Senate confirmation hearing, Secretary of State Rex Tillerson characterized China’s construction of militarized artificial islands in the South China Sea as “akin to Russia’s taking Crimea” from Ukraine in 2014, and suggested that the U.S. should block China’s access to those islands. His comments drew fiery responses from the Chinese state and state-run media alike in the following days.

More recently, Defense Secretary James Mattis reassured Japan’s Prime Minister Shinzo Abe during his visit to Japan and South Korea that a group of disputed islands in the East China Sea — known in Japan as the Senkakus and in China as Diaoyu — would remain covered by the joint U.S.-Japan security pact.

At one point, there were fears that relations between the U.S. and China may well head toward a downward spiral, with state media in China warning after Tillerson’s comments that “the two sides had better prepare for a military clash.”

But longtime China analyst Willy Lam tells TIME that, judging by Trump’s call and his letter to Xi — which says he looks forward to a “constructive relationship” — the U.S. leader is dialing down his China rhetoric — at least for now.

These instances “show that Trump might not be carrying out the threats he made during the campaign, for example, labeling China as a currency manipulator and slapping a 25% tariff on Chinese products,” Lam says.

He suggests that China is “somewhat hopeful” that Trump would climb down from his hard-line posture during the campaign and be willing to talk.

“Even though it’s difficult to predict anything about Trump, it seems that he’s amenable to negotiations first,” Lam adds.

As for whether a more confrontational Trump administration would be a forceful defender of freedoms in Taiwan and Hong Kong in the face of China, Lam sees the two places as merely the “Taiwan card” and the “Hong Kong card” in Washington’s dealings with Beijing. 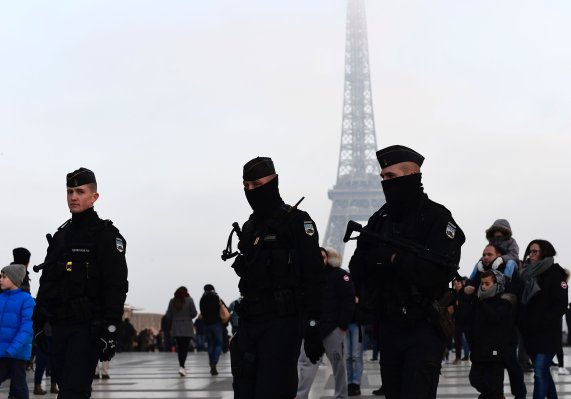 Paris Builds Bulletproof Walls to Protect the Eiffel Tower
Next Up: Editor's Pick