Prime Minister of Belgium, Charles Michel speaks to the media prior to The European Council Meeting on March 7, 2016 in Brussels
Dean Mouhtaropoulos—Getty Images
By Charlotte McDonald-Gibson/Brussels

Belgian Prime Minister Charles Michel has warned other countries in the European Union (E.U.) not to be “naïve” as they embark on lengthy and difficult Brexit negotiations, and said they must resist the temptation to engage in parallel trade talks with Britain.

Michel spoke to TIME ahead of a Friday summit of E.U. leaders in Malta, where the British Prime Minister, Theresa May, will brief her counterparts on her visit to Washington in January. After talks with President Donald Trump, the British government announced that they would start preliminary talks towards a U.K.-U.S. free trade deal.

E.U. officials have warned that Britain cannot legally begin formal trade negotiations with other nations until they have officially left the bloc, which is expected to happen in 2019 — but Michel said they needed to be “realistic” about Britain’s position.

Most important, he said, was for the 27 nations to remain united and not to pursue individual self-interest if Britain attempts to divide and rule. “It will not be easy, and I know the U.K. will certainly try in these negotiations to have parallel negotiations and bilateral negotiations with a few countries,” he said. “But you have to be strong and convince the 27 countries that our interests are to have a common negotiation.”

May received the go-ahead from the U.K. parliament this week to trigger Article 50 of the Lisbon Treaty in March, which will formally mark the start of a two-year negotiating period before Britain leaves the E.U. The two sides need to reach an exit deal tackling practicalities like outstanding U.K. payments to the E.U. They will also need to forge new trade deals with the bloc after Britain leaves the single market.

While some British politicians have suggested that the two sets of negotiations could run concurrently, Michel said that was not an option: “We need more clarity on the first point before we can start the negotiations on the second point. And we have to be concurrent – point one and then point two.”

May on Thursday published her policy for negotiating with the E.U, which included confirmation that Britain will leave the single market and set limits on migration.

Britain’s vote to leave the European Union in June last year triggered soul-searching about the future of the bloc, and the leaders in Malta will also discuss the path ahead. The election of Trump, who openly supported Brexit, has also caused concern in European capitals. Donald Tusk, the E.U. President who is chairing Friday’s meeting, wrote to the leaders ahead of the summit to warn them that “the new administration [is] seeming to put into question the last 70 years of American foreign policy.”

Michel said that the election of Trump showed it was time for the E.U. to stand up for its values of “freedom, respect, tolerance”, but said it also needed to take “strong decisions” to tackle voter concerns and stem Euroscepticism.

“In the last months in Europe we have seen the Brexit, we have seen the election of Trump… it means that it is time now to move in Europe,” he said. “It is very important to take very strong decisions. Not only to discuss, not only to have a dialogue, but to decide in which direction we want to move. I’m convinced that is crucial for the future of Europe.”

One area where the E.U. needed to act swiftly, he said, was in introducing measures to boost security on the E.U’s external borders. Record numbers of people have been travelling illicitly to Europe from Libya in the past year, and stemming these numbers is top of the agenda at the Malta meeting. Under consideration is greater cooperation with the Libyan coastguard to stop people leaving in the first place.

But it is also a humanitarian emergency, with more than 5,000 people dying on the Mediterranean in 2016. NGOs and United Nations officials have also warned the E.U. against forcing people back to Libya when migrants face death, rape, torture and inhumane detection.

Michel said he saw no contradiction between promoting the E.U’s global humanitarian values in the face of Trump’s isolationist stance, while at the same time pursuing border policies which have been criticized for putting more lives at risk.

“We have to find a good balance and certainly it’s not white or black,” he told TIME. “It’s very important to promote our common values, to promote our dignity, to show our respect… That does not mean it is possible in the future in Europe to have all the refugees [from] around the world.” 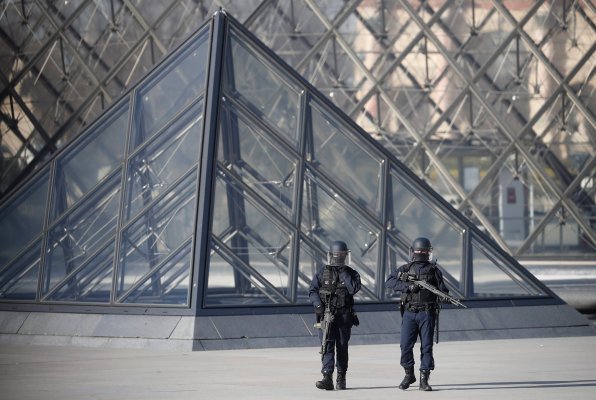 French Soldiers Halt Attempted Attack at the Louvre
Next Up: Editor's Pick