The White House and the Pentagon Are Defending the Yemen Raid

U.S. government officials on Thursday said a Special Forces raid in Yemen on Sunday, the first major military mission authorized by President Donald Trump, was successful—even though it resulted in the death of a Navy SEAL commando and likely several civilians.

The New York Times reports that Trump’s press secretary, Sean Spicer, and Navy Captain Jeff Davis, a Pentagon spokesman, briefed reporters with a detailed chronology of Sunday’s mission, during which Navy SEAL Team 6 came under attack as it neared the home of a suspected al-Qaeda collaborator.

Some reports suggest that the Trump administration moved rashly on the decision to carry out the mission, and that it may have been a risky one. However, “This was a very, very well-thought-out and executed effort,” the Times quoted Spicer as saying.

According to the Times, planning for the operation began last year under the administration of former President Barack Obama, and it was authorized by Trump last Thursday during a White House dinner with Defense Secretary Jim Mattis, several other officials, the President’s son-in-law Jared Kushner and his close aide Steve Bannon.

The timeline laid out by Spicer on Thursday suggested that the operation had already been vetted and approved by Obama.

“The operation was laid out in great extent,” Spicer reportedly said.

The Times also conceded that “the mission’s casualties raise doubts about the months of detailed planning that went into the operation during the Obama administration.”

Members of Obama’s security team cited by the Times, however, dispute this narrative, claiming that Trump inherited notes that emphasized the potential risks. Colin Kahl, a national security adviser to former Vice President Joe Biden, has tweeted his contention that Spicer’s account is inaccurate.

“Obama made no decisions on this before leaving office, believing it represented escalation of U.S. involvement in Yemen,” was one of a number of Kahl’s responses on social media. The Times reports that Kahl’s colleagues support his statements that the operation had not been given the greenlight by Obama.

Meanwhile, multiple reports about the operation claim that it did not go smoothly; the convoy, a joint force of American commandos and troops from the United Arab Emirates, reportedly came under heavy fire as it approached the target, a heavily guarded home that it was hoped would yield valuable data.

Militants may have used women and children as human shields when the Special Ops unit fired back, and by some accounts women took up arms and began firing, as well. U.S. air reinforcement was then called in to support the team, according to a statement by the U.S Central Command.

The statement said that civilians “were likely killed” in the aerial firefight, and that those casualties could include children. Al-Qaeda’s branch in Yemen has reportedly claimed that an 8-year-old girl, the daughter of al-Qaeda member Anwar al-Awlaki who was killed by U.S. forces in 2011, was among those who died on Sunday.

Trump has defended the value of the operation, the Times reports, which he says gleaned intelligence that could help the U.S. and allies prevent future terror attacks. 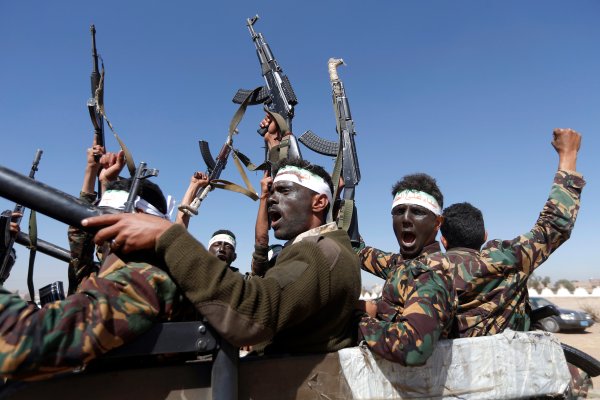 10,000 People Have Been Killed In Yemen
Next Up: Editor's Pick