Q&A: Roger Federer Talks to TIME About Nadal, That Win in Melbourne, and Partying Till Dawn

This week’s issue of TIME features a story on Roger Federer, who on Jan. 29 became the oldest man in 45 years to win a Grand Slam singles final when he beat his arch-rival and nemesis, Rafael Nadal, in a five-set classic. Federer, 35, won his 18th slam — adding to his all-time men’s record — after missing the last six months of the 2016 season because of a knee injury. At best, he thought he could reach the quarterfinals of this year’s Aussie Open.

On Feb. 1, three days after his stunning victory, TIME spoke to Federer by phone—he was at his house in the Swiss alps. You can read the feature story here. Below are expanded excerpts from the interview, in which Federer discusses everything from his rehab process to mental fortitude — and partying till dawn.

You’ve had a few days to reflect on the win in Melbourne. What does that title mean to you?

Maybe to believe and to work hard and persevere and all that stuff. On the surface, everyone sees my technique, the way I play, sort of everything’s easy and comes very natural to me. Maybe this [win] is a different type for me. I was able to show, especially after the tough year I had last year, how to make the right decisions and get past that. And how to move on and right away to create this sort of fairy tale story at the beginning of this year.

Honestly, I never thought I’d be able to win this tournament. That’s what stands out to me three days later. I still can’t believe I was able to make it all happen. This one has a very special, different taste than all the other Grand Slams I ever won. Coming back, getting older, and people have written me off maybe, makes this one so unique.

Last year was really one to forget, but to learn a lot from. At the first press conference after the first match [in Melbourne] I said I would be happy having lost today if my body is feeling well. It would have been a successful trip for me. Because the reason why I went to Australia was to find out where my body was at. In practice I knew it was good. Matches are a different animal, it’s a different story. I thought in the best case I could make the quarters, and beat one good player. Maybe two if things went crazy well. That was my expectation. That’s why it feels to much better, this one, because I never thought in a million years I was going to win.

I thought it would be a stepping stone for the season. Basically my year would start 100% in April. That’s how I saw it. It started 100% at the get go.

With diet, I just didn’t want to become heavy. Because all of a sudden you can’t train as much as you usually do. I was just paying attention there.

The knee was screaming for a rest. That’s when I made the tough decision [to end his season], and we started doing rehab, with quad exercises. I eased into fitness, a little running, a little side shuffling, a little sprinting. And eventually you can do more and more hours a day, more days in a row, and eventually I got into tennis. We’re mixing fitness and tennis. And at the end of October we were going kind of full out already, but in short bursts of time, not too long, not too many days in a row, always a sufficient break. Because I took six months off, I actually had sufficient time to get through all the processes we were looking forward to. Then at the end, all of December, I was going all out. It was just being clever with my scheduling, making sure I’m not getting hurt.

Andre Agassi told me “every time I was away from the game, it was a mental battle more than it was a physical battle. You have to watch guys win tournaments, knowing that every week, you’re sort of going in the wrong direction.” Was it a mental battle for you?

Honestly, that part for me was on the easier side. In life, I like to choose. I want to be healthy as a person, [that’s] number one for me and my family, and, number two, to play tennis again. After playing for almost 20 years, all of a sudden you realize, “I think this body, and maybe the mind, deserve a break.”

The doctors and the team told me, “Look, buddy, you need to rest right now.” Once the decision was done, we [Federer and his wife, Mirka] walked out of the room, and we looked each other in the eye and said, “No problem. OK. We’ll take six months.” I mean, it hurt for a few days. Like it’s supposed to. Then, honestly, for me it was over. It was done. I knew I wasn’t supposed to be playing. I dealt with it like I think I should.

Watching the Olympics didn’t hurt because I didn’t know what I missed. I hadn’t been in Rio before. I thought the U.S. Open was going to be hard to watch — but my knee. I could play for half an hour, then it would swell up again. So I was like, you know what? It was the right decision.

And honestly I was having such a good time away from tennis as well, with my family, doing hikes in the mountains, spending an incredible amount of time together with friends and family. So here we are, all of a sudden saying, shall we do a trip to Paris? I went to fashion shows in Paris. Caught up with friends there. We went to Greece for a vacation for the first time without our kids. I had so many just open dates where I could plan something. I never really have a lot of days where I could catch up with people in advance and say “Let’s meet up on Wednesday at 2:00 p.m. for lunch and do this and that.” I was doing tons of that stuff. That’s what I enjoyed the most.

That gave me a lot of power for this year. I said I have to come out of this six months rejuvenated. Fresh. Hungry. Ready to go. We were able to achieve that.

In your matches against Nadal, the narrative has always been that he has the superior mental toughness. Do you think your mental game is under-appreciated?

I wanted to create a kind of aura that if people played against me, I was not going anywhere mentally and physically. That took me years to build up. Only when I started to win consecutive Grand Slams, and I was able to show that tenacity week in and week out, that’s when I felt like the locker room was actually starting to respect me. Before that, maybe I had that image [of mental inferiority] sometimes. In the years since, I don’t really think I’ve had this.

My mental toughness has always been overshadowed by my virtuosity, my shot-making, my technique, my grace. That’s why when I lose, it seems like, “Oh, he didn’t play so well.” And when I win, it looks so easy. I had that already when I was a little boy. You know, “Why don’t you try harder?” I mean, honestly I tried everything that I possibly could. Just because I don’t sweat like crazy and I don’t grunt, I don’t have this face on when I hit the shot like I’m in pain, doesn’t mean I’m not trying hard. It’s just how I play. Sorry.

Down 1-3 to Nadal in the fifth set, what specifically did you do mentally to stay in it?

I told myself, “You have one more set to play, pal.” It’s so easy to get down on yourself, and say, “Look, it was a great run, it is a great comeback, be happy with the final. It’s fine. It’s all good.” I didn’t allow that to creep into my mind. I told myself, “It’s one more set, give it everything you’ve got. He’s in pain. I’m in pain. Everyone is fighting out there, just try to play offensive tennis and take it to him. Go for your shots. Play free. Enjoy it out there. Play the ball, don’t play the opponent. Try everything. Hopefully, that’s enough.” And it was.

What else do you want to get out of this year?

By winning this, I have even less pressure I would think. It gave me a totally different outlook on the season. I don’t have to overplay. I’ve got a month here, so really relax, take my time. When I play I want to enjoy it. That seemed like the right philosophy, going into Australia. These last years on tour, I want to make the most of it. I’ll pick the tournaments where I feel like I have the best chance at doing well, and then we’ll see what happens. I’ll play Dubai in a month, then Indian Wells and Miami (in March). I probably won’t play too much on clay. I’ll play the French Open and after that play grass, Stuttgart, Halle, and Wimbledon, then we’ll see. That would already be a dream if my body can sustain all of that until July.

In Australia you won your 18th Grand Slam, adding to your singles record. Do you have a Grand Slam goal in mind? Twenty would seems like a nice round number.

I don’t know (laughs). I mean, I had to wait for this one for four-and-a-half years. Really, let’s enjoy this one.

I tried to party like it was my last one. At a night final, by the time you finish it’s like 11:30. Then there’s three hours of press and doping tests and everything, and seeing my friends quickly. I got out of the building at like 3:00 a.m.. And I went straight o the bar with my friends. We partied and danced all night long, we had a DJ. We got back at 6:30 a.m., the kids were just getting up as I came back with the trophy. One after the other, the kids came over to look to look at the trophy. It was an epic 12 hours.

Let’s see. I honestly don’t know. I know my best chances this year will come at Wimbledon and at the U.S. Open. I know a lot of people talk about the Grand Slams. That why it’s been super hard in the last 4-and-a-half years to win a Grand Slam. But also I won the Davis Cup, I got back to world number two, I won a ton of tournaments. I did have great years. It’s not like I was completely somewhere else and I wasn’t playing.

But plans are important. They make a lot of dreams come true. And that’s what happened to me in January. 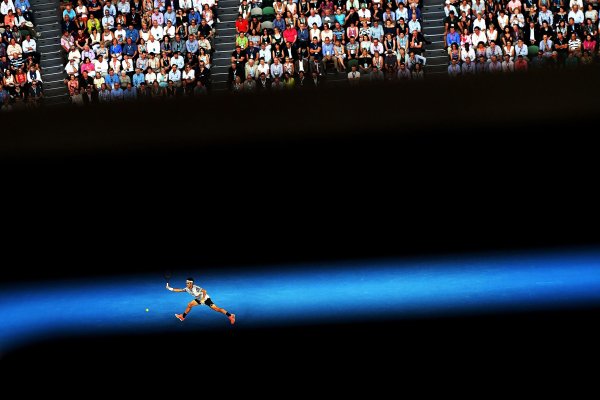