Tens of thousands of visas were revoked last week by President Donald Trump’s executive order than bans the citizens of seven Muslim-majority nations from entering the U.S.

The revelation illustrates the scale of the disruption caused by Trump’s decree, which he signed an executive order on Jan. 27 . The initial disclosure came in a federal court hearing in Virginia in a case challenging the revocation of the visas of a pair of Yemeni brothers who arrived at Washington’s Dulles airport on Jan. 28. The Justice Department initially said 100,000 visas had been revoked, but the State Department later claimed it was closer to 60,000.

The admission capped a week of legal and political turmoil triggered by the imposition of a ban that could reshape the network of allegiances and historic grudges that govern the modern Middle East. Nation states there divided roughly into two camps: those affected by the ban, and those exempt. Among the first camp, outrage ensued. Iran banned U.S. citizens from entering. The Iraqi parliament called for the same. An official from Libya’s U.S.-backed government accused America of “racial discrimination.” But elsewhere there was a tactical silence. With their citizens unaffected by the ban, the governments of some U.S.-allied states, including Saudi Arabia and Egypt, declined to comment. The United Arab Emirates defended the ban.

Throughout the region, Trump’s executive order seemed to foreshadow a coming season of turbulence in relations with the United States. During his campaign, Trump called for a “total and complete shutdown” on all Muslims entering the United States. Here, in the first week of Trump’s administration, was a policy that followed through on his campaign rhetoric, apparently with little regard for the geopolitical fallout.

“The Americans don’t get to act in a vacuum, and when they do act they will often trigger responses from other political leaders who have their own political base. And I don’t think they thought about that at all with respect to Iraq and Iran. My guess is they would say, ‘we don’t care,’” says Robert S. Ford, a former U.S. ambassador to Syria and a career diplomat with years of experience in the Middle East.

President Donald Trump signs an executive order imposing a four-month travel ban on refugees entering the United States and a 90-day hold on travelers from Syria, Iran and five other Muslim-majority countries at the Pentagon in Washington on Jan. 27, 2017.
Carlos Barria—Reuters

U.S. allies in the region now face a choice of acquiescing to a policy that appears to indiscriminately target citizens of other Arab and Muslim states, or rattle relations with the new U.S. administration by expressing reservations about the ban. Few seem likely to take the latter path; among states not included in the ban, only Qatar voiced criticism of the new policy. Asked about the ban, Egypt’s former ambassador to the U.S. Abdel Raouf el-Reedy tells TIME, “Is Egypt supposed to say—to comment on anything happening in the United States?”

Trump spoke on Sunday with Saudi King Salman, but a Saudi readout of the call made no reference to the ban. In Abu Dhabi on Wednesday, the United Arab Emirates’ foreign minister Abdullah bin Zayed al-Nahyan voiced support for the Trump’s policy, saying the executive order “is not directed at a certain religion.” Israel’s right-wing government remained silent. Prime Minister Benjamin Netanyahu tweeted in support of Trump’s plan to build a wall on U.S.-Mexico border, but Israel’s President Reuven Rivlin later apologized to his Mexican counterpart for that statement.

There was far more dissent within the U.S. than in the Middle East. The executive order enacted on Jan. 27 created days of chaos at America’s international airports, as customs and border officials struggled to interpret the order. The White House initially declared that the order also applied to permanent legal residents of the United States—Green Card holders—before reversing that position two days later. As a policy, the order mirrored Trump’s personal style: abrupt, unpredictable and sometimes inscrutable.

“He’s too erratic. It’s one of the things that sets off everybody around the world, that he just says stuff. He issues policy, this crazy Muslim ban thing. And nobody knows quite what it means, so they’re scrambling,” says. H.A. Hellyer, a senior non-resident fellow at the Atlantic Council and the Royal United Services Institute in London.

Demonstrators pray during an immigration-ban protest at Dallas–Fort Worth airport on Jan. 29
Laura Buckman—Reuters

If the new policy presented a challenge for America’s allies in the Middle East, it also gave an opening to its opponents. In Iraq, the ban undermines the standing of Iraq’s U.S.-allied government, handing a political opportunity to pro-Iranian rivals. The Iraqi parliament called for the government to retaliate by banning Americans, a move that would create a fiasco for more than 5,000 U.S. military personnel who are in the country helping Iraqi forces fight ISIS. In Iran, the order strengthens hardliners over officials who favor compromise and negotiation with the U.S. Moreover, experts also say the ban hands rhetorical ammunition to the jihadi propagandists of the Islamic State, who could use Trump’s policy in recruiting.

There are fears the order will set the tone of the White House’s approach to the Muslim world over the next four years. Certainly, there’s a history of hostility to Islam; Stephen Bannon, the White House’s influential chief strategist, has in the past called Islam a “dark” religion. National security advisor Michael Flynn once said that fear of Muslims is “rational.”

“I think it reflects a deeply-held dislike of Islam among Trump and his top advisors. And I think the evidence for that interpretation is now overwhelming,” says Shadi Hamid, a senior fellow at the Brookings Institution in Washington. “We know what people like Steve Bannon and Michael Flynn have said explicitly about, not just disliking extremism or Islamism, but Islam as a religion, and seeing Islam as a civilizational and ideological threat.”

Hamid says that Trump’s policies are likely to worsen America’s image in the Middle East and the broader Muslim world. “When America is literally closing its borders to large numbers of people and promising to do more of that in the coming four years. How long will that perception last? Can the damage be undone if someone else is elected in four years? I don’t know. But I assume that four years of this will do lasting damage on how America is perceived.”

As the week wore on, the Trump administration gave more hints about its approach, signaling it would take a far harder line on Iran. On Wednesday Flynn declared that Iran was “on notice” following an attack on a Saudi naval vessel, in an assault blamed on Iranian-allied Houthi rebels. Further raising tensions on Friday, the Treasury Department announced new sanctions on 25 Iranian people and companies.

A consequential week could signal the shape of Trump’s Middle East policy: driving a wedge yet further into the reigning split between Sunni Saudi Arabia and Shi’ite Iran. Others in the region will find it increasingly difficult to straddle the gap. 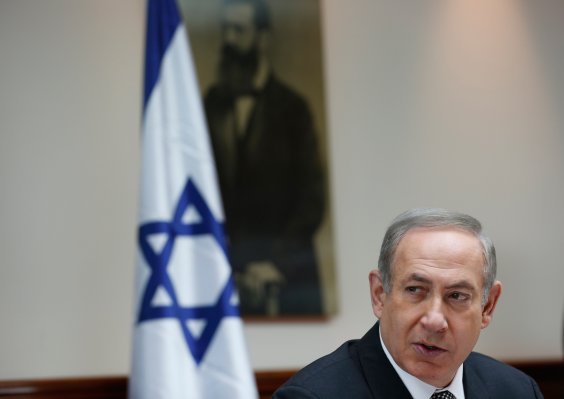 Trump Had a 'Very Good' Conversation With Israeli Prime Minister Benjamin Netanyahu
Next Up: Editor's Pick