Counterterrorism may seem like a complicated, murky business. But practitioners agree on a few simple rules. Among them:

1. Be clear about who threatens you, and target them. Casting your net too widely creates new enemies.

3. Counter and undermine your enemies’ narrative. Don’t confirm it.

4. Don’t drive away moderates; winning them over is key to defeating your enemies.

And, 5. Show efficiency and competence. Those qualities bolster deterrence.

In composing and implementing its executive order “Protecting the Nation From Terrorist Entry into the United States,” Donald Trump’s White House has shown a disregard for — or ignorance of — these precepts that is breathtaking. Despite claims by the White House that this is about making Americans safe from terrorism, less than two weeks into the new administration, the United States has:

1. Made the world’s 1.6 billion Muslims uncertain about the global superpower’s fundamental orientation toward them and their faith. This is a dramatic shift after successive Republican and Democratic administrations drew a clear line between a small group of extremists and ordinary believers.

2. Prompted the parliament of Iraq — our partner, whose army is the primary ground force fighting ISIS — to approve a reciprocal ban on Americans coming to Iraq and put Prime Minister Haider al-Abadi in an impossible position.

3. Given ISIS propagandists a windfall to work with — which they are exulting about — just at the moment that the group is reeling from a series of major setbacks.

4. Profoundly unsettled patriotic American Muslims — who provide as many as 40% of the tips that domestic counterterrorism authorities receive — and undercut their efforts to work with U.S. law enforcement to prevent radicalization.

And, 5. Displayed perhaps the most shambolic performance of the Executive Branch since Hurricane Katrina. The White House blindsided the leadership of the Departments of Defense, Homeland Security and State by handing them an order that they had no time to evaluate or refine. Far less sweeping executive orders have historically required weeks or months of interagency consultation.

To put it bluntly: Trump’s Executive Order has nothing to do with counterterrorism.

The executive order was designed by people with no security background but a long history of being anti-immigrant: chief ideologist Steve Bannon, the former CEO of far-right conspiracy-theory mill Breitbart News, and policy adviser Stephen Miller. It aims to signal that Trump is not deviating from his Islamophobic, anti-immigration, pro-white campaign. So far, it’s working. The nation is following along.

A Reuters/Ipsos poll shows that 49 percent of Americans support the executive order. Nearly a third think it will make them safer. At the heart of that group are Trump voters. Political scientist Michael Tesler observed early on that Republicans who backed Trump were 30% more likely to believe that Muslims threatened the United States and 35% more likely to believe that most Muslims support ISIS than other Republican voters. As the unprecedented elevation of Bannon to a seat on the National Security Council demonstrates also shows, the Trump administration is determined to enthrone ideology instead of pragmatism or expertise.

The executive order aims to reap more than a quick political bonus, though. It seeks to fuse the fears of jihadism with anxieties over America’s demographic trajectory. The Trump White House wants us all to believe that our security interests require both reversing the “browning” of America and curbing the influx of foreigners who will make white Americans a minority in the nation by 2050. Woven in this is a view of Islam as an unalterably hostile force — a perspective so ungrounded in history and theology that it mirrors the jihadi view of the U.S. and the West. Trump and Bannon are not promoting American security so much as fear and racism.

Recognizing the centrality of this anti-immigrant and anti-Muslim animus helps explain why the White House pushed the executive order in week one of the new administration, even though there was certainly no urgency from a counterterrorism perspective. Our immigration systems work about as well as anyone could hope. Since 9/11, not a single death has been caused by terrorists from the seven countries singled out the executive order — or anywhere else — entering the U.S. to carry out an attack. To get into the U.S., a visa applicant must be screened multiple times, including being checked against terabytes of intelligence and law-enforcement materials, biometric data and the like.

As for Syrian refugees, by the time they have finished their 18-24 month vetting process outside the country, we know more about them and their connections than we do about our President, his finances and his foreign partners and investors.

Throughout the campaign, Trump told Americans that our immigration system was failing to keep dangerous people out. On top of that falsehood, he has now piled another: The executive order, he says is “is not a Muslim ban… This is not about religion. This is about terror and keeping our country safe.” Nonsense.

Of course, not all Muslims are being banned. But consider this the thin edge of the wedge. The countries listed are on average 97 percent Muslim, and the sum of their populations is 219 million people. That amounts to the exclusion of a significant chunk of the Muslim world for a first step. Yes, it will be hard for Trump, Bannon and Co. to come up with a way to ban India’s 180 million Muslims. But it seems a good bet that if the executive order survives court challenges, other Muslim-majority countries will face similar treatment. Sebastian Gorka, a former Breitbart editor and now a deputy National Security Advisor, is already hinting as much.

Some will find this far-fetched. Perhaps it is. But making sense of a purported counterterrorism innovation that diminishes our security is no small challenge. Dealing with a cabal of conspiracy theorists requires us to master their dark arts and twisted thinking. 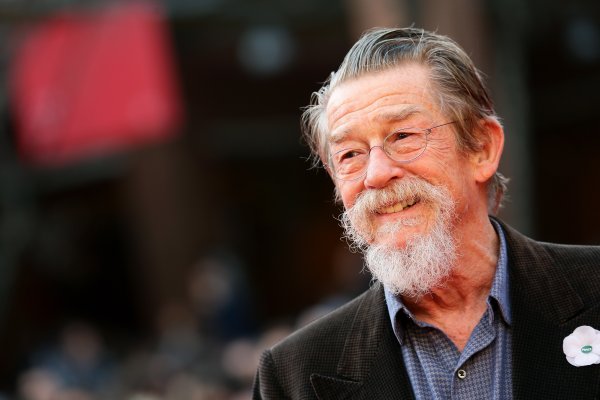 What I Learned from Working with John Hurt
Next Up: Editor's Pick