February is Black History Month in the U.S., a time many public figures are celebrating. So of course President Donald Trump and Beyoncé each marked the occasion, and Stephen Colbert had fun comparing the two on The Late Show.

“Today, Black History Month started the way they all should: with an announcement that Beyoncé is pregnant,” the host deadpanned, noting that the pop star decided to share the news by “showing us her baby bump at what appears to be a very open-minded Sears portrait studio,” in an already-iconic Instagram photo. (It’s Instagram’s most-liked image of all time.)

Then he moved on to the president, who is “a rainbow coalition from the neck up,” he said.

“He held a press conference to honor the two black luminaries he knows, Ben Carson and Omarosa,” Colbert joked. (Carson is the newly appointed Secretary of Housing and Urban Development, while Omarosa Manigault was the Trump campaign’s director for African-American outreach; the two were seated on either side of Trump.) Colbert also lambasted Trump for listing off other African-American icons, including Frederick Douglass, Harriet Tubman, and Rosa Parks, seemingly at random.

“Hearing a lot more about this Fred Douglass guy. You know Fred Douglass, John? Is he a rapper or something like that? He’s not the Fred Prince of Bel Air?”

Watch the full clip, above. 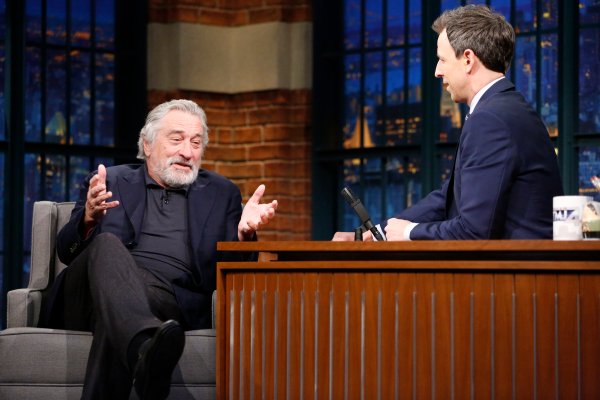 Robert De Niro Makes Fun of Himself With Endless Trump Parody Tweets
Next Up: Editor's Pick