“Do you believe it? The Obama Administration agreed to take thousands of illegal immigrants from Australia. Why? I will study this dumb deal!”

With this withering tweet late Wednesday night, President Donald Trump put a refugee deal agreed with the Obama administration to take in 1,250 refugees in jeopardy. The message appeared to be a reaction to a report in the Washington Post about a phone call with Australian Prime Minister Malcolm Turnbull which went badly awry.

The agreement, Trump reportedly told Turnbull on Saturday, “was the worst deal ever.” It would get him “killed’ politically at a time when domestic sentiment was pushing him to secure American borders against would-be terrorists. Australia, by urging him to honour the deal, was seeking to export “the next Boston bombers.” The U.S. leader cut this expected one-hour call after 25 minutes, the Post reports.

This extraordinary chain of events has put the country in the unusual position of being at the center of an international diplomatic furore, and the 24-hour global news cycles. And for the most part, it would be fair to say that Australia has not responded overly favorably.

Local television and social media exploded overnight on what was quickly dubbed “Phonegate.” Everything from Donald Trump’s approach to phone etiquette and lack thereof — did he or didn’t he hang up? — to what this diplomatic feud means for Turnbull and his meager political capital came under scrutiny.

There was little public or political sympathy for Turnbull, the center-right leader who was re-elected in 2016 and has been accused of being lackluster in defending Australian principles of the “fair go” in his dealings with the U.S. on refugees and human rights, among other things.

Many wondered if the deal to resettle refugees from an offshore Australian detention center had now been cancelled — which would be a humiliating snub to Turnbull’s government. The Prime Minister wouldn’t comment on the Post report, saying only that he had received assurances the deal was still on. “President Trump’s decision to honour the refugee agreement has not changed,” an embassy spokesman had told the reporters, according to an official in the Sydney consulate. “This was just reconfirmed to the State Department from the White House and on to this embassy at 1315 Canberra time.”

The apparent diplomatic snub has raised patriotic concern over perceived disrespect to the Australian leader. On 24-hr news channel Sky News, a panelist on political journalist David Speers’ show, retiree Lyn Ryan, said he was angered by the “bullying and pushing around… I find it offensive as an Australian.”

But some panelists on right-wing talk show Paul Murray’s show, also on Sky News, had sympathy for Trump’s position. Malcolm Roberts, a senator for the anti-immigration One Nation party, applauded the U.S. President’s hard-line stance. “It shows the difference between these two leaders,” he said. “Donald Trump understands his main responsibility as a government is to protect people’s lives, to protect property and to protect freedom. He is standing up for his country in scrutineering this deal.”

Possible solutions ranged from sending Mr Turnbull on an emergency make-nice visit to Washington, to organizing a meeting between Australian Foreign Minister Julie Bishop and US secretary of state Rex Tillerson, to inviting Mr Trump for a state visit to smooth things over.

Murray, the host, said Australia should have expected this kind of treatement at some point. “The reality is that a lot of Americans voted for … a more inward-looking, more insular America. They didn’t want the world’s policeman, they didn’t want them solving the world’s problems, they’ve got enough problems in their own backyard,” he said. “I think we are just going to have to accept that from time to time we have to cop the raw end of the pineapple because America will look after itself under Donald Trump.”

The last word belongs to The Boss. Bruce Springsteen, who is currently touring Australia, opened his show in Melbourne overnight with a nod-nod-wink-wink performance of “Don’t Hang Up.” An insider told TIME that he began with a few words about the call: “We stand before you, embarrassed Americans, tonight… what else can I say but s–t is f—ed up man. The E Street Band needs some Aussie spirit.”

The audience loved it, by all accounts. 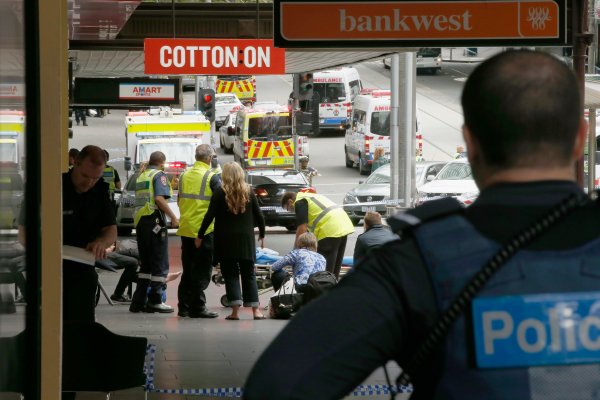 3 Dead, 15 Hurt After Car Rams Pedestrians in Melbourne
Next Up: Editor's Pick