In Chapter 2, retired hit man John Wick (Reeves) heads abroad for another round of grisly vengeance
Lionsgate
By Sam Lansky

“I’m not an anarchist,” Keanu Reeves says. “But as a kid, I always asked, ‘How come?’ So this is my childhood tradition. Stories about fighting against unreasonable authority and systems resonate with me.” The actor has seen that dynamic play out again and again over the course of his long career. At 52, he says, “I’m old enough now to almost have a Reevesian canon.”

Soon that canon will include John Wick: Chapter 2, in theaters Feb. 10. The film is a sequel to 2014’s unexpectedly great John Wick, a surreal, moody revenge thriller that grossed $86 million globally against a budget of about $20 million. In the first film, Wick, a onetime assassin grieving the death of his wife, comes out of retirement to track down the punk who killed his puppy. The sequel pits Wick against a global crime syndicate and ratchets up the intensity of its anime-inspired fight sequences. (Both films were directed by Chad Stahelski, a former stuntman who doubled for Reeves in The Matrix in 1999.) This Wick feels more commercial and less subtle, but the melancholy that pervaded the first film is still there. Reeves says that gloom drew him to the character. “In fiction, suffering is good,” he says. “I liked his grief.”

Most hero stories are catalyzed by some form of tragedy, and contemporary action films tend to dispense with backstory quickly as a method of establishing bare-minimum sympathy with the audience before moving on to spectacle. Reeves, by contrast, seems drawn to characters whose deep woundedness is the story. He is adept at carrying tragedy with him through a film, rather than just the perfunctory scene or two. Quips are relatively few and far between. And from the ’90s–when he starred in films like Point Break and Speed–onward, Reeves has looked different from most of his peers: more sinew than gruff, more likely to be driven by inner turmoil than external aggression. In the character of Wick, for instance, Reeves sees a fight for agency he says echoes his own. “That sense of wanting to have independence and move freely in the world,” he says. “That’s one of the threads.”

Reeves cuts an enigmatic figure in popular culture, too, especially in his downtime. There was the “sad Keanu” meme in 2010, and a string of side projects. He’s played bass guitar in two bands, produced a well-received documentary about the transition from photochemical to digital film and co-founded a motorcycle company. Several years ago, he began collaborating with artist Alexandra Grant. In 2011, they published Ode to Happiness, a grownup picture book with illustrations by Grant and soulful aphorisms written by Reeves. For their next work, they’ve been riffing on failure as a theme. Reeves says he’s been writing it in his head, though he hasn’t gotten anything on paper yet.

For now, he has found a surprisingly rich hero in Wick, a guy who’s had everything taken from him, and so ends up adding to the canon. Says Reeves: “It’s me reclaiming my life.” 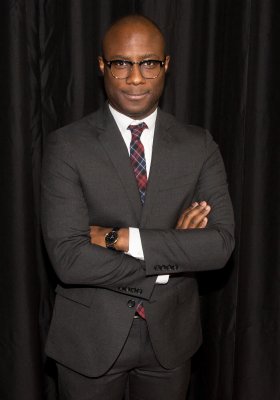 Moonlight Filmmaker Barry Jenkins on the Bittersweet Feeling of Being a First
Next Up: Editor's Pick